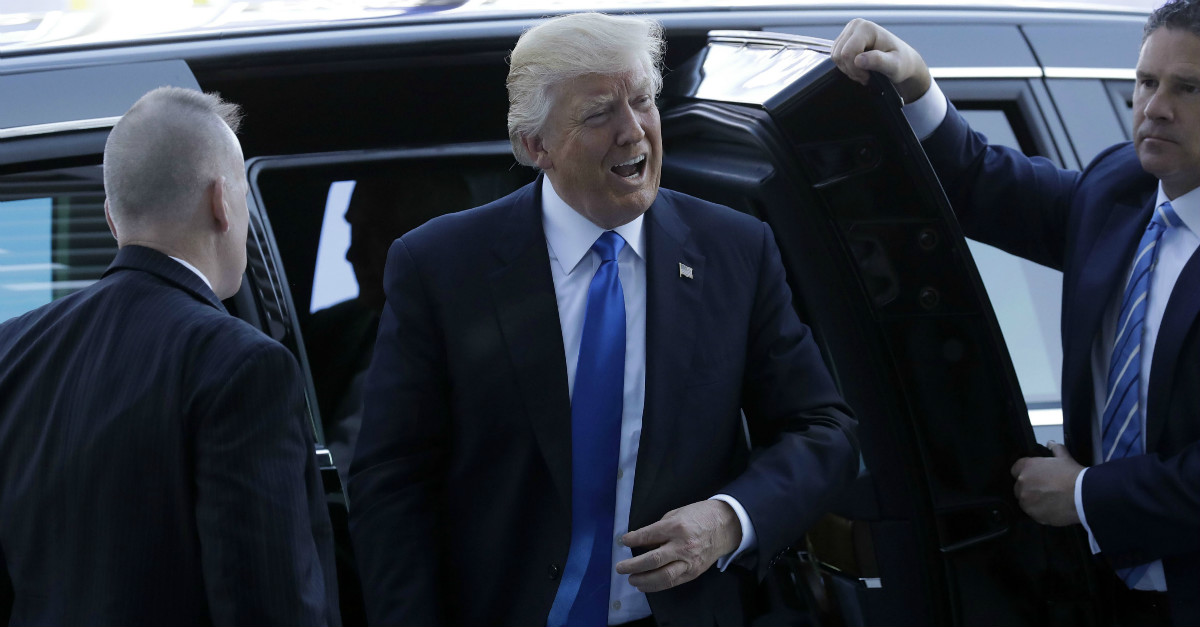 (AP Photo/Matt Dunham)
US President Donald Trump arrives to meet NATO Secretary General Jens Stoltenberg during a NATO summit of heads of state and government in Brussels on Thursday, May 25, 2017. US President Donald Trump and other NATO heads of state and government on Thursday will inaugurate the new headquarters as well as participating in an official working dinner. (AP Photo/Matt Dunham)

Department of Justice lawyers are trying to argue that President Donald Trump isn’t violating the Constitution if his companies, such as the Trump International Hotel in Washington, D.C., accept payments from foreign governments.

According to a new brief, DOJ lawyers are requesting that a lawsuit that was brought against Trump by Citizens for Responsibility and Ethics in Washington (CREW) be thrown out. They are arguing that Trump is not violating the emoluments clause of the Constitution, which bars federal officials from accepting payments from foreign governments, because the clause does not apply to certain transactions, according to The Hill.

RELATED: A Washington, D.C. artist just used a Trump hotel as a way to speak out against President Trump

Bloomberg reports that the Department of Justice contends that the clause does not apply to “fair-market commercial transactions” such as payments for hotel rooms and golf club fees. They also said that CREW doesn’t have any legal standing because the issue of an emolument clause violation should be taken up by Congress, not the court system.

CREW filed the lawsuit in January when Trump first took office, saying at the time that they were trying to stop “President Trump from violating the Constitution by illegally receiving payments from foreign governments.”

“We did not want to get to this point. It was our hope that President Trump would take the necessary steps to avoid violating the Constitution before he took office,” CREW Executive Director Noah Bookbinder said earlier this year. “He did not. His constitutional violations are immediate and serious, so we were forced to take legal action.”