Normalcy has all been thrown out the window since the Trump administration came into power four months ago, and now adding to the strangeness of these days are “Jeopardy!” game show champ Ken Jennings and President Trump’s son Don Trump Jr., engaging in a Twitter war revolving around Trump Jr.’s little brother, Barron.

It takes a real man to pick on an 11 year old. Yet another low from the left, but they will rationalize this away with their usual excuses. https://t.co/JDF3VsVEJ1

I will kill as many white rhinos as it takes to prove my masculinity to Donald Trump Jr. https://t.co/mm8YzH2NPB

It all started, of course, with comedian Kathy Griffin’s disturbing photograph of her holding a fake severed head covered in blood. The head was portrayed to be that of the president. Trump certainly was not amused, and he tweeted that his 11-year-old son Barron, was “having a hard time with this.”

Jennings, apparently, didn’t really believe Trump’s take about Barron and tweeted out what he considered to be a joke.

RELATED: The artist behind Kathy Griffin’s bloody Trump head photo shoot speaks out about the controversy

I have moved the necktie to one side of the ham but it still looks a little like the president. 🙁

And then when TMZ tweeted a report on its website saying Barron thought the severed head really was his dad, Jennings again took to Twitter to suggest that Trump was using his son as “political cover.”

TMZ reports: Barron Trump was watching TV & saw @kathygriffin holding the severed head. He thought it was his dad. My heart is broken.

Jennings, who writes educational books for children, took some significant blowback for tweeting about Trump’s youngest child. Critics have urged people to call Jennings’ publisher, Simon and Schuster, and demand they drop the “Jeopardy!” champ.

RELATED: Be thankful you live in a country where Kathy Griffin is free to be a reprehensible moron

And then Trump Jr. jumped on that outcry and tagged Simon and Schuster, the same publisher that had a mega-deal with conservative provocateur Milo Yiannopoulos but severed those ties when disturbing video of him speaking gleefully about pedophilia surfaced on social media and sparked a national outrage.

Good point, you would think that in this day & age @simonandschuster would have an issue with one of their children's authors bullying a kid https://t.co/S4Bxs7AnSs

In case you somehow missed the photo of Griffin that caused this entire Twitter ruckus between a game-show champion and a son of the President of the United States, here it is: 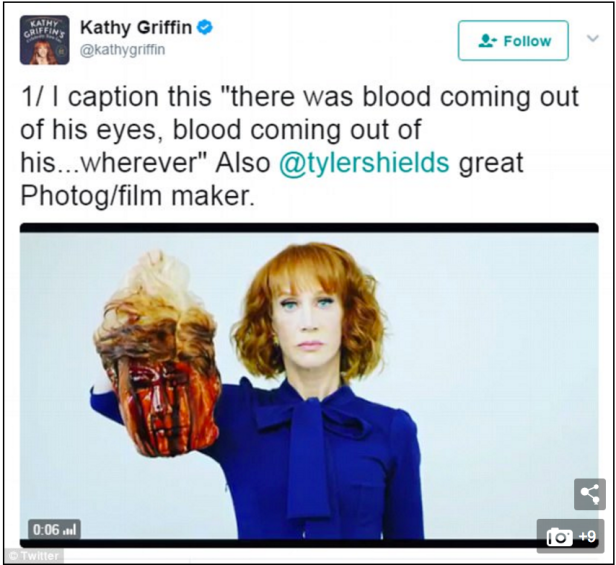