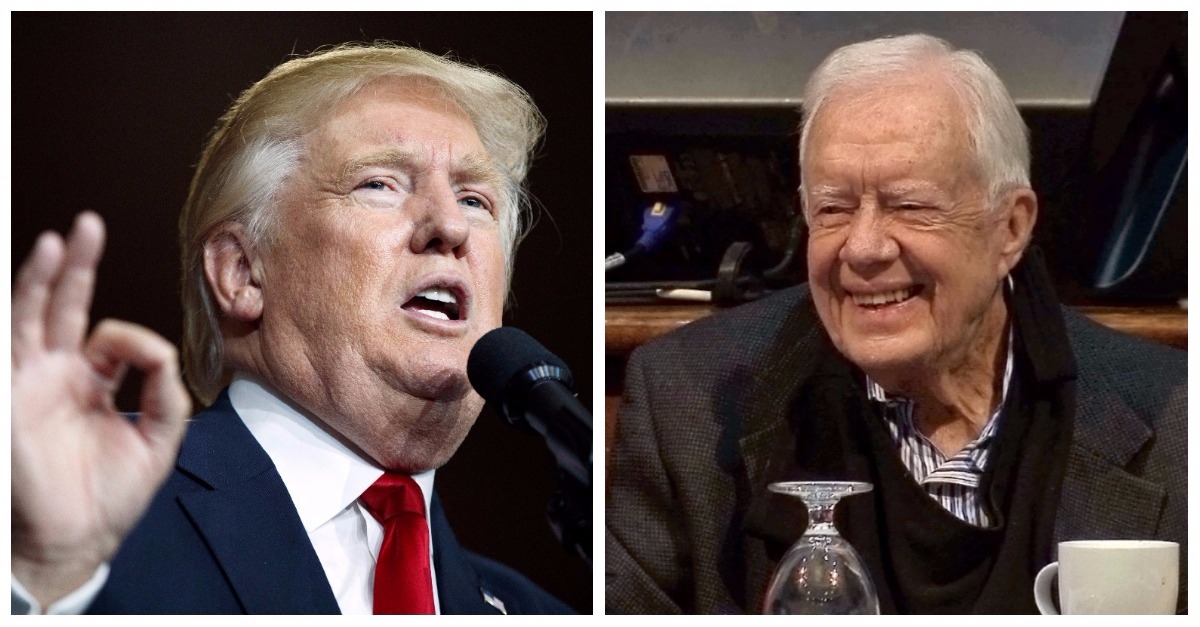 AP Photo/Evan Vucci, AP Photo/Alex Sanz
FILE - In this Aug. 1, 2016 fike photo, Republican presidential candidate Donald Trump speaks in Mechanicsburg, Pa.Trump has alarmed U.S. allies in Asia and elsewhere by suggesting that American military support should depend on their willingness to pay. But he would not be the first U.S. president to consider shaking up time-honored military deployments. Four decades ago, then-President Jimmy Carter tried to withdraw American troops in South Korea, and failed. He wanted to trim fat from the U.S. defense budget and put pressure on South Korea over human rights abuses, but hit a wall of opposition in his own administration and in Seoul. (AP Photo/Evan Vucci, File), In this image taken from video, former President Jimmy Carter speaks at the annual Human Rights Defenders Forum at The Carter Center, Tuesday, May 9, 2017, in Atlanta. Carter says he's concerned that the Trump administration's approach to foreign policy will hasten declining support for human rights in other countries. (AP Photo/Alex Sanz)

President Donald Trump, as he often does on weekends, tweeted in the early morning, this time praising former President Jimmy Carter for saying that “the media have been harder on Trump than any other president.”

RELATED: Jimmy Carter says media has “been harder on Trump” than others

Carter made the remarks last weekend during an interview with The New York Times.

“I think the media have been harder on Trump than any other president certainly that I’ve known about,” he said. “I think they feel free to claim that Trump is mentally deranged and everything else without hesitation.”

Just read the nice remarks by President Jimmy Carter about me and how badly I am treated by the press (Fake News). Thank you Mr. President!

“Just read the nice remarks by President Jimmy Carter about me and how badly I am treated by the press (Fake News). Thank you Mr. President!” he tweeted.

Other notable remarks from the Carter interview included that he would rather NFL players stand for the national anthem, that he didn’t “think there’s any evidence that what the Russians did change enough votes, or any votes [in the election]” and that he is more nervous about Kim Jong-un than he was about Kim Jong-il.

“I think he’s now got advanced nuclear weaponry that can destroy the Korean Peninsula and Japan, and some of our outlying territories in the Pacific, maybe even our mainland,” Carter said.