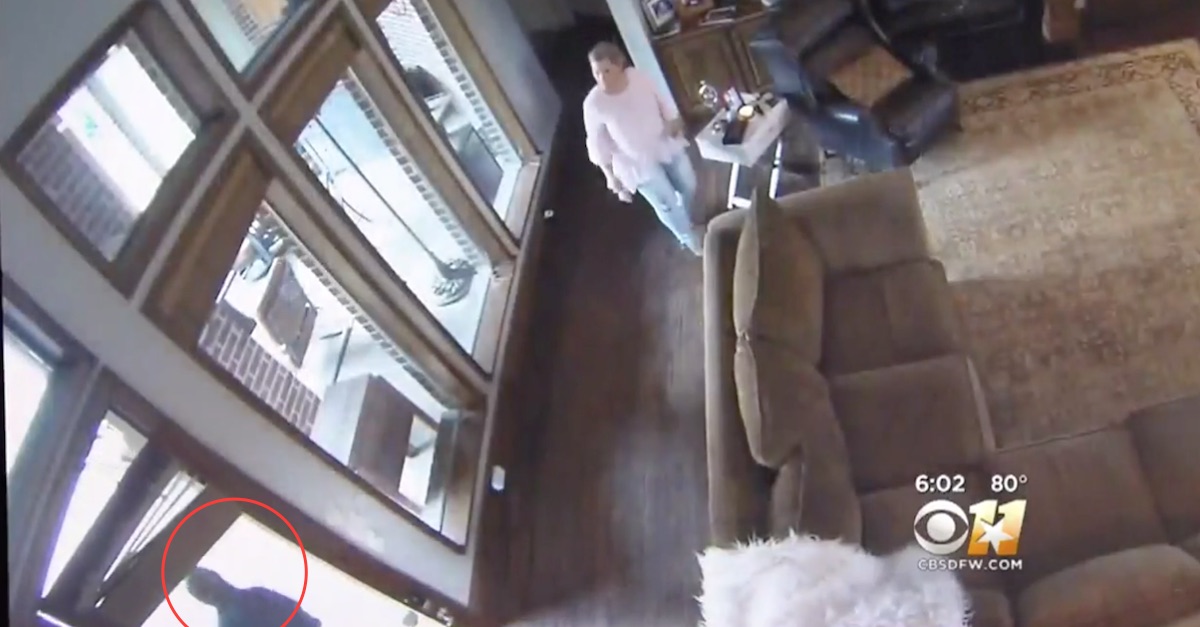 A mom from McKinney, Texas, who sensed something was up outside her home scared off a teen burglar she believes targeted her house because her 14-year-old son buys and sells popular shoes known as “Yeezys” and had just posted an ad about a pair of the shoes on the internet.

Her 12-year-old twin daughters were also upstairs at the time of the attempted break-in.

Although the mere sight of mom Maria Luce in her home was enough to get a teen burglar to run away, she took it to another level on social media with the clearest of messages.

Luce, who has a recording of the incident, called out the burglar on social media.

Here’s what she wrote there:

We are locked and loaded. And WILL use it. This. Is. NO. GAME. To the young teenager that broke into our home this afternoon in broad daylight-NOW you have committed a FELONY. And I want to THANK YOU for leaving your fingerprints EVERYWHERE for the fine McKinney Police Department. They have all of your prints. And it’s on camera -our inside AND outside surveillance cameras and security systems have YOU breaking and entering. They already have your fingerprints, height, all video footage, description -everything. You think this is a joke? GET THIS STRAIGHT. Be glad I didn’t have this shotgun in my hand when I came face to face with you. I can guarantee the winner and outcome on that. And this-all for tennis shoes?!?! All McKinney middle school parents -be aware if this is your child -he’s in VERY SERIOUS TROUBLE. Spread the word around. I. Am. Not. Kidding. When. It. Comes. To. The. Safety. Of. My. Family. And. My Home. YOU SCREWED WITH THE WRONG PERSON.

Luce was brandishing a shotgun in her video and vowed that the intruder would be caught.

“You think this is a joke? GET THIS STRAIGHT. Be glad I didn’t have this shotgun in my hand when I came face to face with you,” she said.

In recent times, we’ve seen teen armed robbers shot and killed in self-defense by an Oklahoma man with an AR-15. It really isn’t a joke.

Luce said that the burglar was not only caught on camera but also helpfully left his fingerprints behind. It should only be a matter of time before he’s caught, but the police investigation continues.