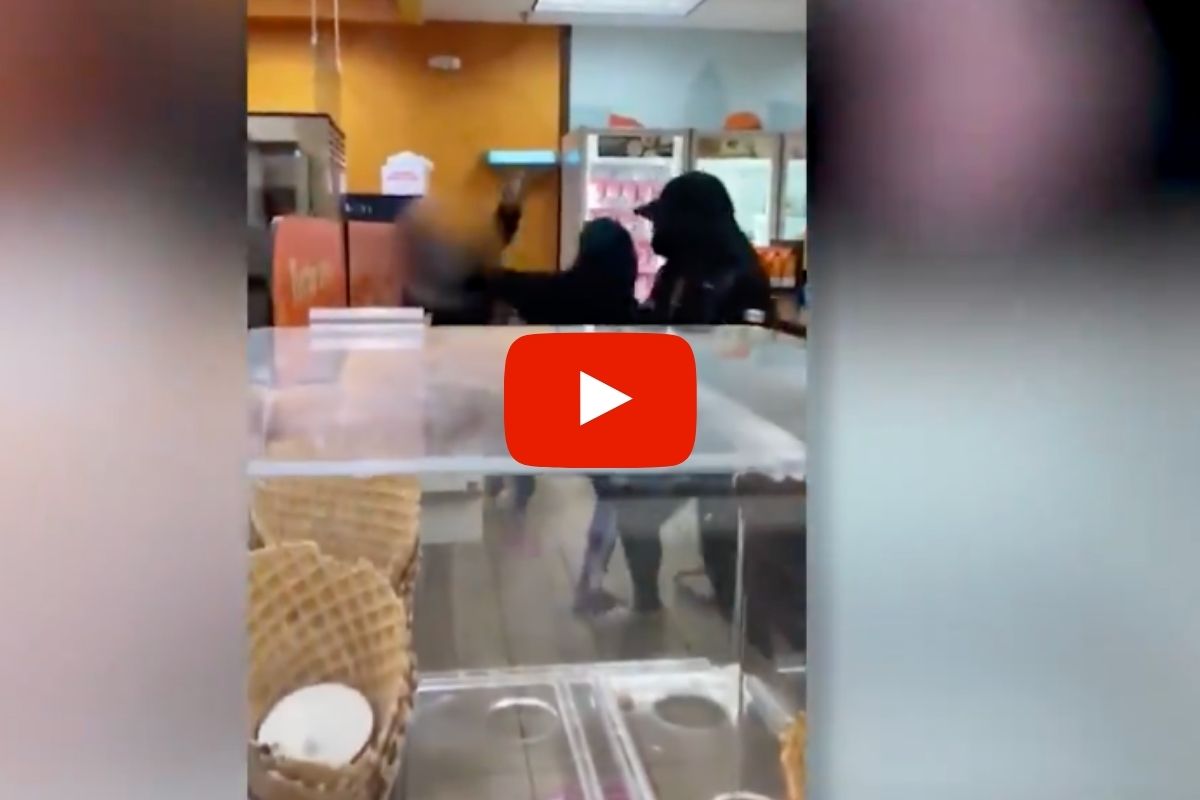 My man just wanted a chocolate donut. A teenage Dunkin’ Donuts employee in Georgia is recovering after being stabbed by a customer who was furious that the delicious coffee shop ran out of a certain doughnut. The 17-year-old worker is luckily out of the hospital after being stabbed in his left arm at a Union City branch of Dunkin’.

According to employees, a Georgia woman and a man initially went through the drive-thru to place an order, but quickly returned to enter the shop. Union City police stated that the man was upset that Dunkin’ Donuts had to run out of a certain kind of donut that he desperately wanted. Luckily for us, it was all captured on video, where you can see fists flying between the Dunkin’ donuts employer and the Man in the middle of the store. That’s when the man then pulled out a knife and waved the weapon in the air during the terrifying encounter.

A disturbing video shows a customer with a knife arguing w/ a 17-year-old Dunkin' Donuts employee. She was stabbed in the upper arm but will be ok. Union City Police are trying to use this video and surveillance video to identify the man. Details at 10 and 11 on @FOX5Atlanta. pic.twitter.com/g8rH189HRx

At the start of the video, one can see a woman appearing to be an upset customer trying to intervene in the altercation, before then backing away. Later another female employee came out from behind the counter and followed the fighters, who both moved out of the frame. According to Union City Police Officer Jerome Turner, “They both engaged in a physical dispute between each other and once that happened then he of course pulled out a knife.” During the brawl, the victim wasn’t stabbed in the upper arm. The suspect fled before law enforcement could arrive, but the Union City Police Department in Atlanta is urging anyone with information on the attack at 770-964-1333.

The police officer stated, “We want to identify who the subject is. We just don’t want him showing up at another Dunkin’ Donuts or any other business or anywhere in public and having the temper where he can make this kind of an assault.? As far as what Dunkin’ Donuts had to say, a spokesperson for the donut shop shared the following statement, ?At Dunkin?, the safety and well-being of our guests, franchisees and their restaurant employees is a top priority. We are aware of the incident that took place at the Dunkin? restaurant located in Union City, GA. The franchisee, who independently owns and operates this restaurant, informs us that he is cooperating with the local authorities. As this is an ongoing investigation, we defer any additional questions to the police.? A tragic ending indeed, it’s not Dunkin’ Donuts fault, bro. You just came a little too late. Enjoy that aggravated assault charge one you get caught.