Should Teachers Who Carry Guns In School Be Given a Pay Raise? 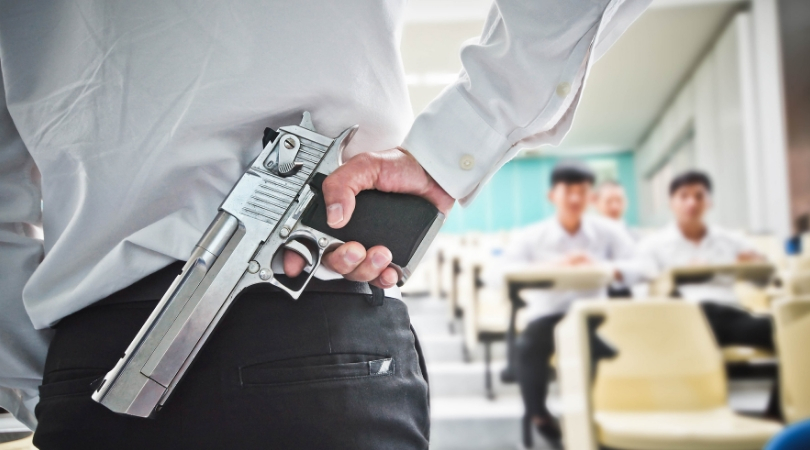 It looks like North Carolina lawmakers are at it again, this time pushing to arm teachers with guns, all while trying to make it worthwhile for educators. The Senate Bill, which was filed on March 12, 2019, states the ‘School Security Act’ of 2019 would give teachers a 5% salary boost to those who undergo basic police training.

Republican State Sen.Warren Daniel, who is one of the Bill’s sponsors, said it is a way to put more security on the ground in the schools. He added, ?It?s extremely costly to put a school resource officer in every school ? and there?s a great shortage of the number of applicants to law enforcement agencies. This bill is an attempt to bridge that gap.?

Daniel, along with two other Republican lawmakers (of course) introduced the same Bill last session, but it died in committee. A similar Bill to arm teachers has been proposed in the State House earlier this year, but it doesn’t include a pay raise. Individual school systems across the state would be able to implement the new bill if they see it could help the school, or opt out altogether. Ultimately, the school has the last say and can decide whether the teacher actually carries the weapon on their person, or if they have it locked in a vault that is reachable.

Now, I don’t’ have to be a pro at weapons to think that this is just unnecessary and can probably cause more harm than help in any way. Not only will teachers have a gun with them at all times, but children might be scared to even go to class, afraid they’ll get shot if they make the wrong move. And well, most teachers agree!

What about weekends? Shouldn't priests, ministers, and rabbis get the same deal? And scout leaders? Coaches? Kids eat fast food a lot. Maybe all cashiers & cooks could be trained to shoot the bad people. Starbucks baristas. They really need to be armed. https://t.co/J0U378VEpS

The National Education Association found in a poll given in 2018 that an overwhelming majority of teacher would not want to carry a gun in school. A 2018 Gallup poll also found that 73 percent of teachers in the U.S were against arming school employees. Why? Well, it’s pretty much a disaster ready to happen.

As I said, firearms at any school could endanger students as well as other people inside the building. Sure, they can protect, but what happens when a teacher is terrified of a student who is having a panic attack and thinks they are going to lash at them?

What should be done to help students? Well, there are always training that teachers can take with support specialists such as counselor or psychologist that actually address emotional, social and physical health needs for students that can train teachers that don’t require the use of a firearm.

So yeah, I’m going to have to pass on this one.