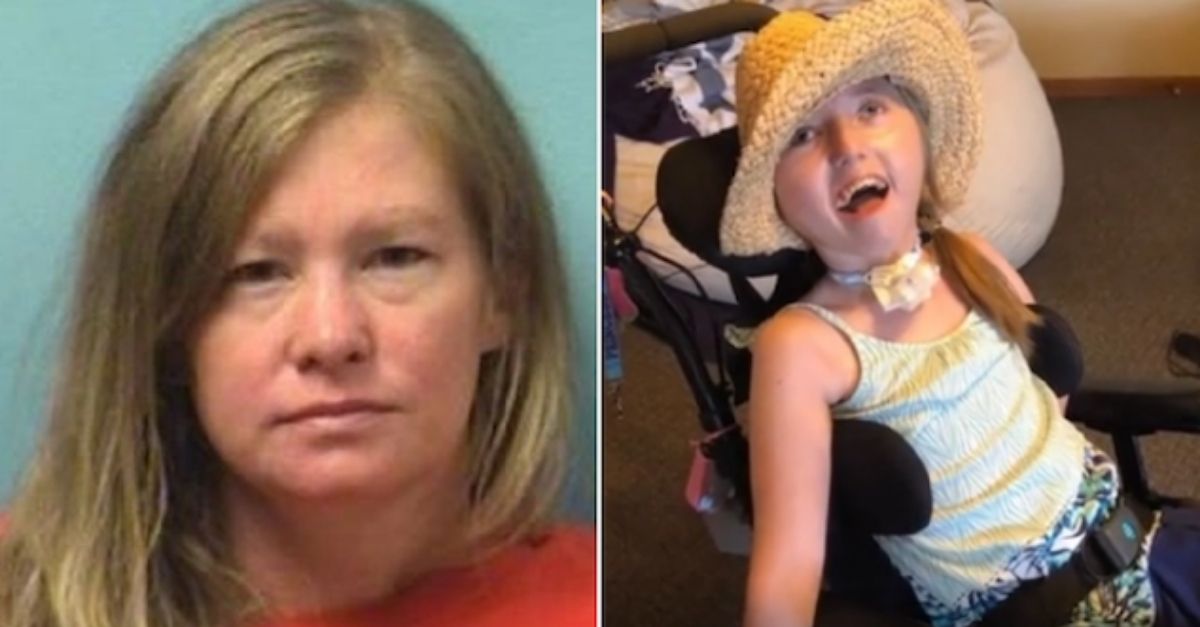 I’ve said it once and I’ll say it again, some people do not deserve to be parents. It’s shocking to see how many stories have popped up online recently about parents doing the unthinkable to their children because they don’t want to raise them anymore. Like this Minnesota mom who has been slapped with a murder charge. According to authorities, 35-year-old Elise C. Nelson turned off the medical device alarm on her daughter’s oxygen monitoring device, allowing the poor girl to die. Nelson, who is a Paynesville Resident, was taken into the Stearns County district court on Wednesday.

The mom was officially charged with second-degree intentional murder and with second-degree manslaughter in connection with her daughter’s death. 13-year-old Kylie Larson is severely disabled and has medical problems including chronic respiratory failure and severe developmental delay from a loss of oxygen at birth. The criminal complaint stated that the autopsy results were consistent with the mother’s actions. The Midwest medical examiner’s office attributed Kylie’s death to complications during birth, but also noted that Nelson deprived the care of her daughter resulting in her death. Nelson is now in Stearns County Jail in lieu of a $350,000 bail as she awaits a hearing on October 8th.

Back in 2008, Nelson and her husband filed a $23.2 million medical malpractice lawsuit against the Affiliated Community Medical Centers and Rice Memorial Hospital in connection to her birth complications. The case was settled for an undisclosed amount in the end.

According to the U.S. Sun, the girl wore a pulse oximeter that monitored the child’s oxygen saturation levels and pulse rate. If either of the two would go low, an alarm would quickly sound alerting the parents there is a problem. The device also keeps records of the use of the monitor. The data collected from her monitor was used against the mother by authorities. According to court documents, the mom silenced her 13-year-old daughter’s warning alarm twice and continued doing so for the duration of the period that spanned June 18th to the 21st.

The mother then got fed up and allegedly disabled her daughter’s medical device entirely. The child last had a pulse at 6:43 a.m. the day she passed away. Six hours later, the Mom finally dialed 911. First Responders who rushed to the scene found Kylie heavily unresponsive on the living room floor. She was then reported dead soon after. After the cops questioned the mom, she claimed that her daughter’s oxygen levels dropped to 86 before she ultimately Flatlined. Nelson told enforcement that she had been doing CPR for an hour, but law enforcement stated that she didn’t look as though she had exerted herself.

There’s a Devil Loose: Minnesota Mother Charged With Murdering 13-Year-Old Disabled Daughter After Turning Off Her Vital Oxygen Alarm While Her Husband Was on a Fishing Trip https://t.co/4eJrr6uUlA pic.twitter.com/QnGIZ77nw2

Kylie suffered from cerebral palsy, developmental delay, and respiratory failure due to being unable to survive on oxygen at the time of her birth. According to the family’s online obituary of Kylie, the girl was “a gift from God.” They stated,

“Kylie enjoyed being outside and moving around, whether it be spinning around in her chair, going for walks with friends and family, or traveling to new places. She loved spending time with her family and going for boat rides,” her obituary read. “Her fellow schoolmates looked forward to pushing her around in the halls and laughing with her. You saw her sweet soul and smile in her eyes.”

Watch: Mom Arrested For Intentionally Setting Car on Fire While 14-Month-Old Sat Inside