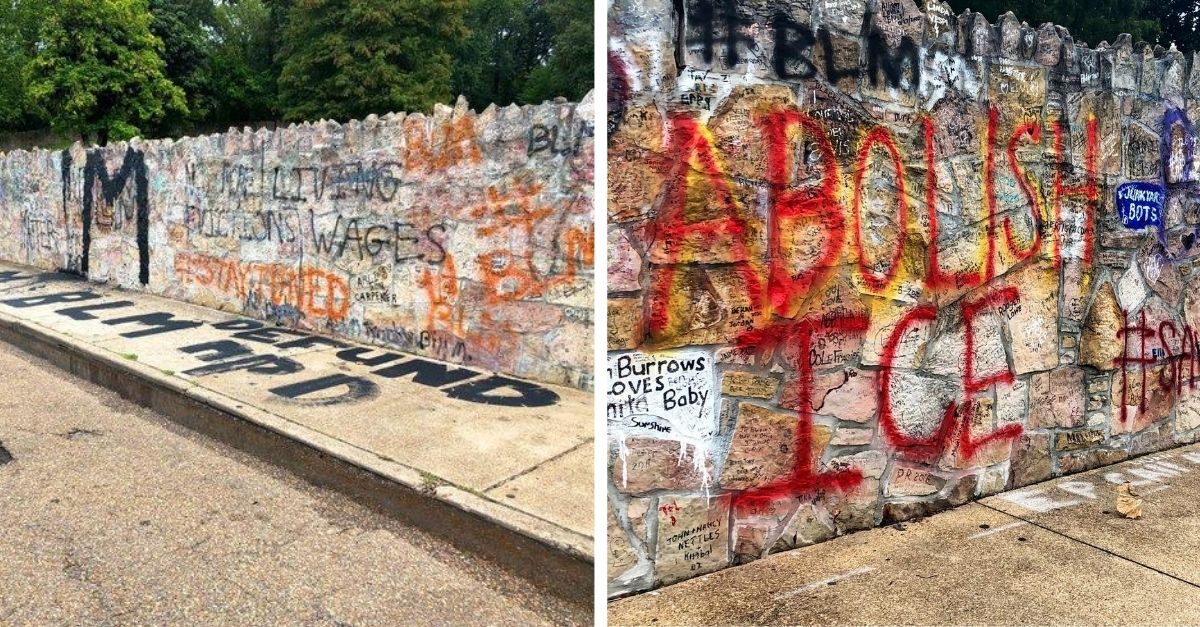 Elvis Presley’s Graceland estate has been vandalized with ‘Black Lives Matter,’ ‘BLM,’ and ‘Defund the Police’ graffiti overnight. Protest slogans were found spray-painted in orange and black on the stone wall surrounding Elvis’ Mansion, a signature Memphis landmark and major tourist draw. According to the newspaper the Commercial Appeal, the word ?F*ck Trump? and ?Abolish ICE? were also spray-painted.

The graffiti-covered most of the hundred tributes handwritten by fans on the wall over these past years. By mid-morning, workers with power wash equipment quickly began to remove the slogans. Unfortunately, Graceland officials have yet to comment on the vandalism.

This isn’t the first graffiti vandalism that occurs in the area. Another Memphis Landmark, the historic concert venue The Levitt Shell, was also the vandalized with similar graffiti, with phrases such as ?Defund MPD? (Memphis Police Department) and ?Eat the Rich.? The open-air amphitheater in Overton Park was where the singer gave his first paid concert back on July 30, 1954. The legend himself lived at Graceland for 20 years until his death on August 16, 1977, at the age of 42.

The state is located on a stretch of Highway 51 South named Elvis Presley Boulevard and was open to the public in 1982. The tourist attraction is said to have over half a million visitors annually. Several Elvis fans on Twitter called for the vandalism to stop, saying that it was disrespectful to Presley’s legacy. Many took photos of the spray-painted walls noting that it wasn’t fair for fans who wrote their name to pay tribute to the King of Rock ?n? Roll.?

The wall outside @VisitGraceland in #Memphis where #Elvis fans write their names and tributes to The King was vandalized overnite. #BlackLivesMatter #DefundMPD #AbolishIce & #BreonnaTaylor were spray painted all over the wall.
📸: @BriseidaHolguin pic.twitter.com/xT9gcyQz82

Despite people being angry at vandals, others were in favor of the graffiti, saying that it was a good spot to draw attention to what is occurring around the country, defending the Black Lives Matter movement. One person tweeted, “Graceland is an expensive, for-profit institution that fleeces tourists while giving nothing back to the black communities it sits in the middle of. It is a symbol of everything this city gets wrong about [sic] economic development and activists are smart to use it to promote their cause.”

Natalie Wilson, an executive director of Levitt Shell released a statement through the Commercial Appeal, saying, “We wake up, excited to celebrate our city on 901 Day, and we see our beautiful historic landmark defaced with messages of pain, and that breaks our heart. We’re broken-hearted and devastated by this.”

Watch: There Are Some Convincing Conspiracy Theories About Elvis Being Alive