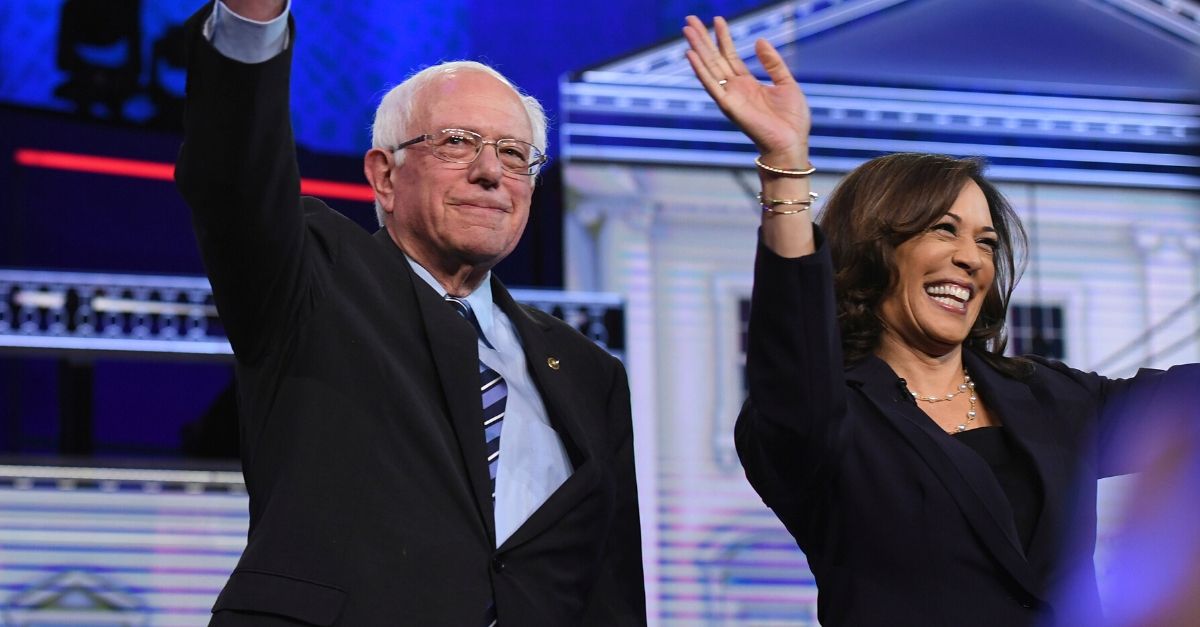 Editor’s Note: This article was originally published on April 17, 2020. It was updated on May 11, 2020, after Senators Kamala Harris, Bernie Sanders, and Ed Markey introduced the Monthly Economic Crisis Support Act.

Senator Kamala Harris (D-Calif.), Bernie Sanders (I-Vt), and Ed Markey (D-Mass.) have officially pitched an idea to pay most American families thousands of dollars each month until the COVID-19 economic crisis subsides. The trio has now released their plan called the Monthly Economic Crisis Support Act. This will expand on the $1,200 sent to Americans as part of the March coronavirus stimulus plan.

The legislation would send a monthly $2,000 check to those who make less than $120,000. It would expand to $4,000 to married couples who file taxes jointly and it will also provide $2,000 for each child up to three. According to Harris, the bill is a reflection that Congress’s efforts were not “nearly enough to meet the needs of the historic crisis.”

Speaking about the ACT, Sanders stated, “Congress has a responsibility to make sure that every working-class household in America receives a $2,000 emergency payment a month for each family member.” The payments are said to be retroactive to March and would continue until three months after the Health and Human Service department has officially declared the public health emergency over. The legislation would also bar any debt collectors from taking the payments, delivering them regardless of whether people have a Social Security number or if they filed any taxes last year.

The effort for Markey, and the two former presidential rivals, represent one of the biggest and most expensive ideas that have been put forward for the next round of the coronavirus relief. Other House and Senate Democrats have proposed federal guidelines for workers’ salaries, with Senator Josh Hawley (R-Mo.) pitching his idea of having the government subsidize employers’ payroll to avoid any mass layoffs.

In the past few weeks I’ve introduced legislation that would:
✅Provide people $2,000 monthly payments throughout this crisis
✅Establish a racial & ethnic disparities task force
✅Get money in the hands of minority-owned & micro-businesses

People are suffering. We must act—now.

It looks like the first stimulus check we have received just wasn’t enough. With the coronavirus pandemic still going strong, we have seen several families and individuals struggling to pay rent, buy groceries, and just buying everyday essentials. Which is why co-sponsors U.S Rep. Tim Ryan (D-OH) and Rep. Ro Khanna (D-CA) are now proposing Americans receive a $2,000 check every month.

To break it down for you, the Emergency Money For the People Act proposes to help eligible Americans by receiving $2,000 per month for at least six months and will continue until national employment returns to how it was pre-COVID-19 levels. So, who would be eligible to receive this money? All single Americas who are older than 16 and are earning less than $130,00 a year. Married couples who make less than $260,000 a year would receive a monthly $4,000 check plus an additional $500 per child, capped off at three children. Luckily, the money would not be considered income and would not be taxed.

“A one-time, twelve-hundred-dollar check isn’t going to cut it. Americans need sustained cash infusions for the duration of this crisis in order to come out on the other side alive, healthy, and ready to get back to work. Members on both sides of the aisle are finally coming together around the idea of sending money out to people. Rep. Ryan and I are urging leadership to include this bill in the fourth COVID relief package to truly support the American working class.”

How does this compare to the CARES Act? Well, this proposal includes more Americans. Unlike the first round of stimulus checks, several eligible college students and adults with disabilities still get a check even if they are claimed as a dependent. Even if people who had no earnings, were unemployed or are currently unemployed would be eligible. If you are not eligible based on your 2018 or 2019 tax information but would be eligible based on your 2020 information, you could also submit two consecutive months of paycheck to verify your eligibility based on your income.

The legislation would make it easier for people to get that money, including expanded methods of payment such as paper check, apps like PayPal, Zelle, Venmo, or direct deposit. So far, the proposal has 17 Democrats for it but no Republicans as of yet. The negotiations on the next round of assistance are said to already be underway, but there has yet to be a final decision made.

Let’s face it, those $2,000 would be pretty sweet and could help out so much.

Editor’s Note: This article was originally published on April 17, 2020.

Watch: Trump Puts Name on Stimulus Checks, First Time a President Has Ever Done So