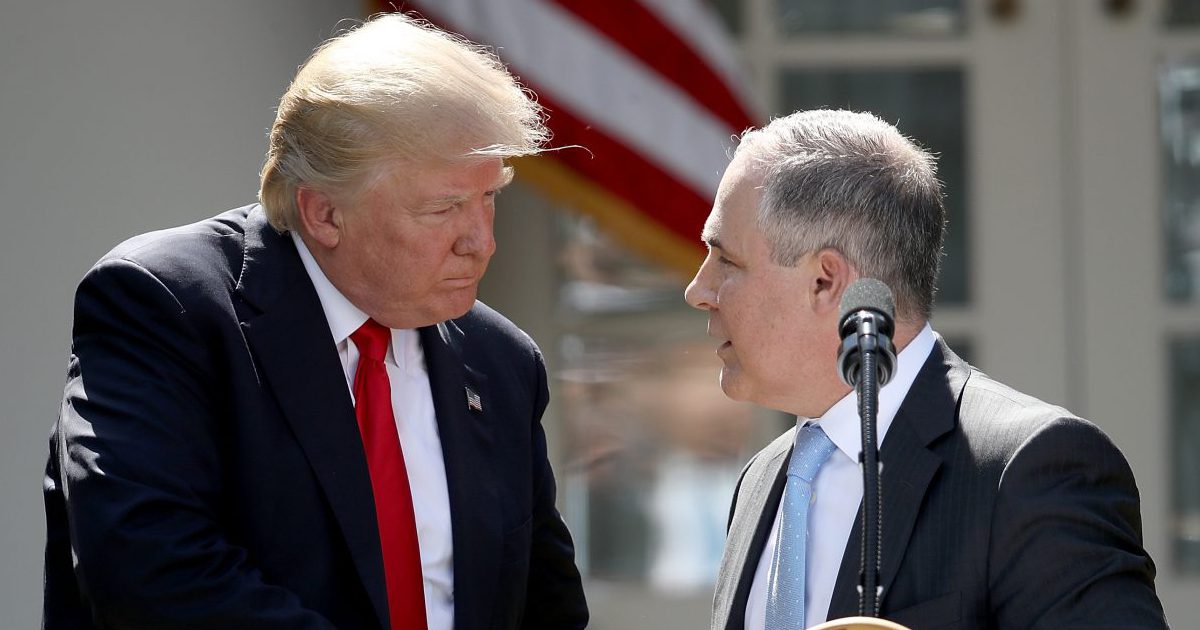 Win McNamee/Getty Images
WASHINGTON, DC - JUNE 01: U.S. President Donald Trump shakes hands with EPA Administrator Scott Pruitt after announcing his decision for the United States to pull out of the Paris climate agreement in the Rose Garden at the White House June 1, 2017 in Washington, DC. Trump pledged on the campaign trail to withdraw from the accord, which former President Barack Obama and the leaders of 194 other countries signed in 2015. The agreement is intended to encourage the reduction of greenhouse gas emissions in an effort to limit global warming to a manageable level. (Photo by Win McNamee/Getty Images)

Eliminating the Waters of the U.S., or WOTUS, rule would be a symbolic victory for Pruitt, who attempted to sue the Environmental Protection Agency 13 times during his years as Oklahoma Attorney General. Every one of those suits was unsuccessful, according to NPR.

According to the statement from the Environmental Protection Agency, paring back the WOTUS rule is a first step to “provide certainty in the interim, pending a second rulemaking in which the agencies will engage in a substantive re-evaluation of the definition of ‘waters of the United States.'”

In a first step, Trump signed an executive order mandating an EPA review of WOTUS shortly after taking office. Implemented in 2015, the law is seen by Republicans as a power grab by federal environmental officials and burdensome to the agriculture and energy industries.

In the statement from the EPA, Pruitt wrote:

We are taking significant action to return power to the states and provide regulatory certainty to our nation’s farmers and businesses. This is the first step in the two-step process to redefine ‘waters of the U.S.’ and we are committed to moving through this re-evaluation to quickly provide regulatory certainty, in a way that is thoughtful, transparent and collaborative with other agencies and the public.