Eric Trump wore a sombrero while blowing out birthday cake candles, and the internet lost it 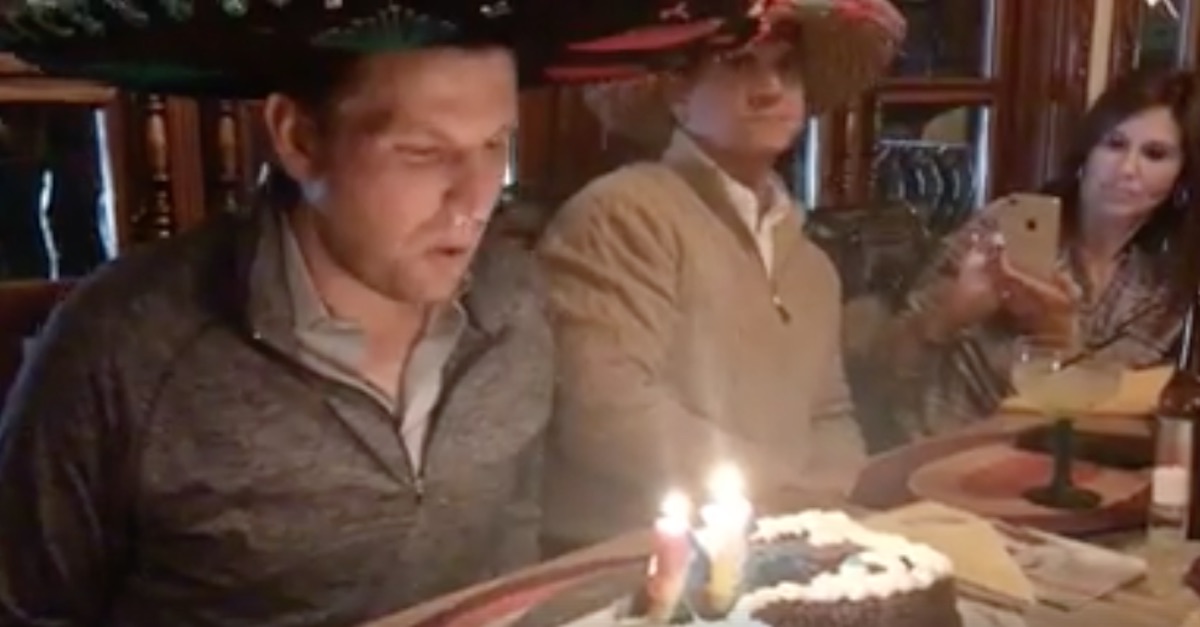 Donald Trump’s son Eric turned 34 on Saturday and was spotted celebrating at Guadalajara Mexican Restaurant in New York with family and friends.

Trump blew out the birthday cake candles while wearing a sombrero.

RELATED: President Trump goofs off in family photos from their Christmas dinner

Regional Administrator of Housing and Urban Development (HUD) Lynne Patton recorded the video and posted it on Facebook.

#HappyBirthday to one of the greatest people I know. We love you, Eric! Amazing night with even more amazing friends. …

“#HappyBirthday to one of the greatest people I know. We love you, Eric! Amazing night with even more amazing friends. I think Lara summed it up best when she said, ‘I love everyone at this table so much!’” Patton wrote.

Social media and news sites got wind of the video and offered an angry response, linking the sombrero to Donald Trump’s campaign rhetoric and The Wall.

His dad may call Mexicans "rapists" who bring drugs across the border, but Eric Trump still spent his birthday donning a sombrero and chowing down Mexican food. https://t.co/77xtnEdnHK

@EricTrump Doesn't it seem a *little* ironic to joyfully wear a sombrero after calling Mexicans rapists & accusing them of ripping off the US & trying to wall them out…?https://t.co/SA7hbHXTv2

What an asshole. And I'm guessing they brought that cake in from outside (???).

Ironic @realDonaldTrump son @EricTrump is wearing a sombrero at Mexican restaurant. I wonder if Mexico is going to pay for it? https://t.co/hcpcSX7jZu

Hey Eric, did your father try to deport the Mariachi singers? did you call them "bad hombres" ? you're goofing off in a sombrero while taxpayers have to foot the bill for Trump's racist 18 billion dollar border wall https://t.co/XbAnxinKiW

Others wanted to know why this was news.

WHY IS THIS NEWS?! Eric Trump wears sombrero at his Mexican-themed birthday https://t.co/vTTXdR7HUG via @nypost

I'm sure people will handle this maturely.

Eric Trump wears sombrero at his Mexican-themed birthday https://t.co/QiMYp52f2a via @nypost The libtards are going to need therapy

This is newsworthy?
"Eric Trump wears sombrero at his Mexican-themed birthday" https://t.co/cJ8ShZpIJi via @nypost

hey snowflake no one cares what you think. America wants the WALL so go cry and hug your puppies or perhaps someone can send you a pacifier

Happy birthday to the best little brother ever… @erictrump you don’t look a day over 60 buddy. 😂🎂😂🎂😂🎂#birthday #brothers #brotherlylove pic.twitter.com/8Ps095MVBk

Happy birthday to my amazing brother @EricTrump. I love you very much & hope that this year will be your best turn around the sun yet! ☀️ 🎂 pic.twitter.com/xCQiXXuvmv