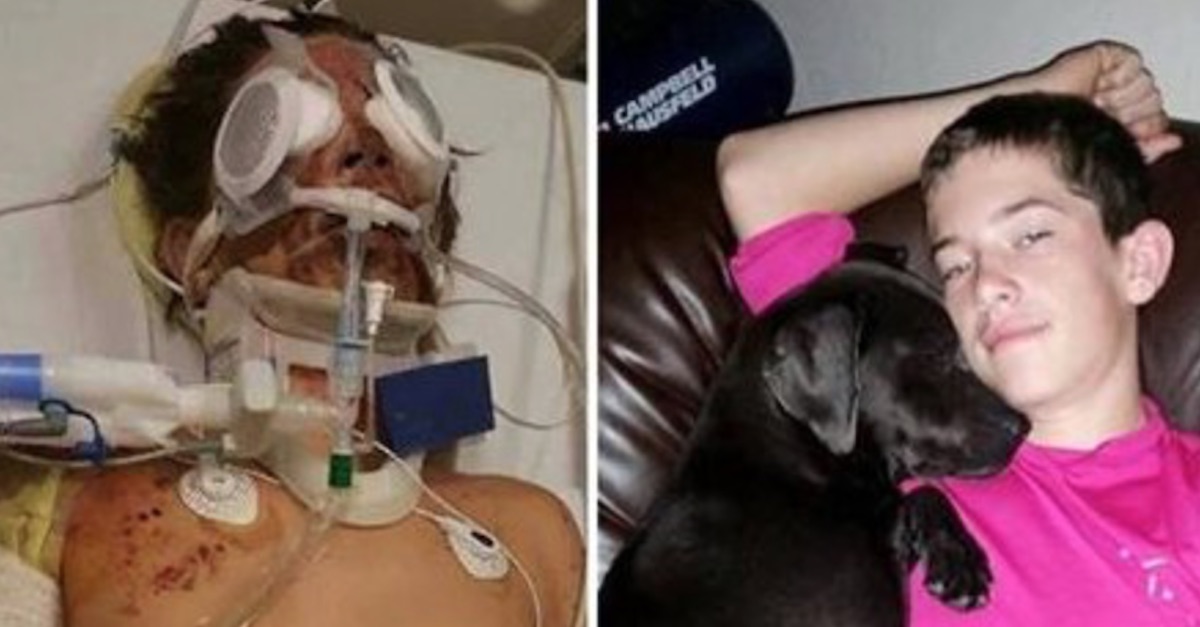 The Texas teen who lost his leg after bundling 180 sparklers together, wrapping them in electrical tape and setting them ablaze may also lose his eyesight.

Currently, the teen’s considered to have a 50/50 chance of seeing again.

The accident, which occurred Saturday, two days before the Fourth of July, has left Rowdy Radford, 15, in bad shape. The “sparkler bomb” blew up in Radford’s face before he had the chance to get away.

RELATED: A teenager is fighting for his life after a fireworks explosion turned him into a reminder for ?safety first?

The explosion caused a four-foot hole in the ground and was reportedly heard by neighbors four miles away.

Teen blows off fingers, mangles leg and may be blinded from homemade 'sparkler bomb:' https://t.co/0LXqeHwZww pic.twitter.com/LeiWJ8kIoJ

Bradford’s leg was removed after he was taken to the hospital.

According to KHOU, doctors still don’t know if Radford will be able to see again, as metal fragments flew into his eyes and still haven’t been removed.

One of Radford’s aunts, Samantha Hansen, spoke to KHOU and said her nephew has been making “booms” for years.

?Rowdy has always been known for making his booms and he makes his booms by scaring everybody,? she said. ?They do it every year. But we didn?t know this was going to be a big one.?

?As soon as Rowdy went down to light it, it exploded. He didn?t even have a chance to run,? she added. ?If you knew Rowdy and how wonderful a child he was, you wouldn?t want nobody to go through this. Protect your children; anything can happen.?

A GoFundMe campaign has been started on Radford’s behalf, and it details the sad state of affairs.

?Both of his arms had [injuries] including pins and screws needed to hold his wrists and elbows together,” the GoFundMe says. “Several of his fingers were blown off, both hands severally burned along with his face. He also just got out of surgery from having an operation on both of his eyes and they are not sure if he will ever see again.”

RELATED: A horrific carnival ride injury to a girl?s scalp has a family wondering why workers didn?t act sooner

A new update, posted two hours before this writing, reads as follows:

The doctors looked at Rowdy’s eye and they can’t see the cornea due to being severely burned and because of this they can’t remove any of the metal fragments that are still in his eyes. Also Rowdy is now fighting infection in the leg that was partly amputated and because of the infection they might have to remove more of the leg. Rowdy will also be under going more surgery tomorrow. He is still on a breathing machine and being kept sedated. I want to thank everyone for your donations and kind words to this wonderful young man and his family. #ROWDYSTRONG

Radford is still in intensive care and is on a breathing machine.

The GoFundMe has raised one-third of its goal, receiving more than $13,000 since it was created two days ago.