Farmer Amputates Own Leg With Pocket Knife To Save His Life 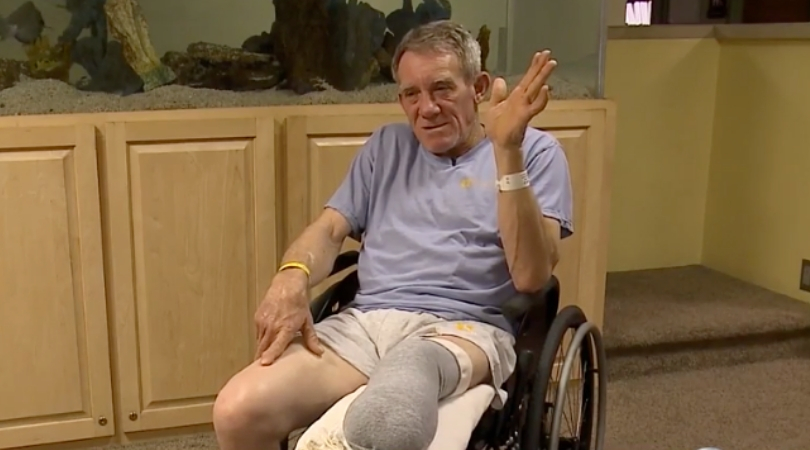 Via KETV
Via KETV

A Nebraska farmer is slowly recovering after cutting off his own leg with a pocket knife to save himself from a piece of farm equipment he had become caught in. YES, this man used his POCKET KNIFE to cut his own leg. Excuse me while I go cringe and cry.

63-year-old Kurt Kaser was unloading corn last month, accidentally stepped on the grain hopper opening after getting out of the truck. An auger in the hopper caught the farmers leg, pulling it in and mangling it. Stuck, Kaser said he couldn’t pull his leg out and didn’t have his cell phone to call anyone for help. Unfortunately, the farmer was alone at the time of the incident, so he decided to become the bravest man on the planet and use his pocket knife to saw off his leg.

“I didn’t know what to do and I didn’t know how long I would keep my consciousness either, I about gave up but then I remembered I had my pocket knife. I didn’t have a phone on me, I didn’t know where it had gone, so I just started cutting with the knife. I knew I was done cutting because I felt a funny feeling, maybe it was a tendon I cut.”

After being freed, he managed to crawl 150 feet using his elbows to the nearest phone. Medical professionals arrived to help the man, and he was quickly flown to Bryan Medical Center where he stayed there for a week. Surprisingly enough, Kaser says he never lost consciousness, which makes me believe this man is Superman. How does one not pass out from that much pain!? Maybe the adrenaline?

Kaser was released last week from Madonna Rehabilitation Center where he underwent physical therapy. According to 63-year-old-man, this isn’t the first time he had a scare like this while working on the farm. When he was in 6th grade, he got his other leg stuck in a tractor, but luckily only hurt his leg on the surface.

The farmer will have to wait for the amputated leg to fully heal before getting a prosthetic leg but is looking forward to getting back on track. Speedy recovery, Kurt!