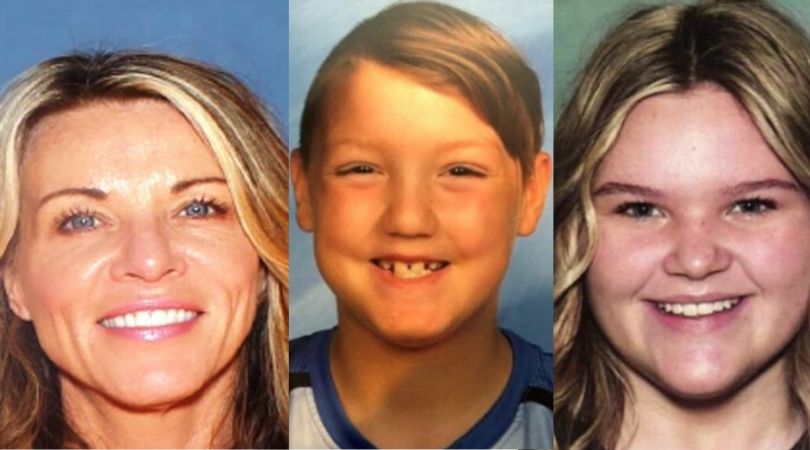 Editors Note: This article was originally published on February 21, 2020, it was updated on June 10, 2020, after authorities stated the bodies found on Chad Daybell’s property allegedly belonged to the children.

Prosecutors have claimed the two bodies found in the backyard of Lori Vallow?s husband’s home allegedly belong to the children. On Wednesday, Chad Daybell made his first court appearance before Fremont County Judge via video conference. The man has been charged with two counts of destruction alteration and concealment of evidence. If found guilty of the charges, he could face 10 years in prison.

During the hearing, Rob Wood, Madison County Prosecutor, claimed that the bodies’ identities have not been publicly confirmed yet, but are bodies of children. Wood also stated ?the manor of concealment? of one of the two bodies was ?particularly egregious.? They are both currently under investigation for potential murder, attempted murder, and conspiracy charges in the death of his first wife.

The family of JJ Vallow, the missing boy, confirmed that his body was one of the two sets of human remains found, according to Fox 5. It is not yet clear if the other body found was his 17-year-old sister.

The family of JJ Vallow has confirmed that his body was one of the two sets of human remains found at Chad Daybell's home in Idaho on Tuesday.https://t.co/23Z8fC5Vj4

Lori Vallows is currently behind bars on a $1 million bond after being arrested back in February on charges of failing to produce her two children 17-year-old Tylee Ryan and 7-Year-old Joshua ?JJ? Vallow. The children disappeared after a trail of strange deaths both before and after Vallow?s and Daybell?s marriage in November.

She is also charged on felony counts of desertion and non-support of dependents children, resisting or obstructing officers, criminal solicitation to commit a crime, contempt of court, and willful disobedience of court process in order for failing to produce two kids. She has pleaded not guilty and also denied her ex-husband’s claim that she knows the whereabouts of the children.

Daybell is currently being investigated in Idaho, where he lived in the time of his previous wife, Tammy, who died two weeks before he and Vallow got married. Authorities have not charged Daybell as of now in connection with her death.

Chad Daybell, whose wife's two children have been missing since last year, has been charged with destroying evidence. Prosecutors say the remains of two children were found on his Idaho property. https://t.co/K1lg77i9YA pic.twitter.com/QUjGNmhEP4

Editors Note: This article was originally published on February 21, 2020, it was updated on April 21, 2020, and again on June 9, 2020, after authorities found human remains at the home of Chad Daybell, Lori Vallows’ husband.

Idaho investigators have stated they discovered human remains at the home of Chad Daybell, who is the husband of Lori Vallows, dubbed as “cult mom.” Authorities took Daybell into custody and is now being investigated. Rexburg Assistant Chief Gary Hagen announced the discovery of the unidentified human remains after Rexburg Police officers, Fremont County Sheriff deputies, and the FBI all arrived with the warrant and a backhoe at the home.

He was seen being taken into custody by authorities after being pulled over in an SUV near his home in Salem, Idaho. The vehicle was towed to a storage facility in Rexburg. Police have not released any information about his arrest.

I just witnessed a backhoe arrive at the home of Chad Daybell where they are searching. He was taken into custody at around noon a mile from his home. #WhereAreTheKids? pic.twitter.com/s3jN0NtMgr

Vallow and Daybell became husband and wife in November 2019 after his previous wife died under ?suspicious circumstances.? A month earlier, Vallows two children had disappeared and were reported missing by their grandparents. The disappearance of 17-year-old Tylee Ryan and 7-year-old Joshua “JJ” Vallows has generated international headlines.

In February, Vallow was arrested on child abandonment charges in Hawaii and remains locked up in Idaho on $1 million bail. Her family has accused her several times of being part of a cult with Daybell, who is the author of more than a dozen self-published doomsday novels.

Editor’s Note: This article was originally published on February 21, 2020. It was updated on April 21, 2020, after authorities announced that Lori Vallow, the mother of the missing children, is now being investigated for the murder of Tammy Daybell.

And when you think the nightmare ends with justice, more horrific details seem to come out. Lori Vallow, the mother of the two missing children in Idaho, is now being investigated for the murder, attempted murder, and conspiracy in the death of her husband Chad Daybell’s previous wife, Tammy Daybell. She was extradited from Hawaii to Madison County Jail on a $1 million bond.

This is a separate case from her being charged with two counts of felony child abandonment, misdemeanor resisting and obstructing an officer, and solicitation of a crime and contempt of court in response to the search for her still currently missing children, Joshua (JJ) Vallow, 7-years-old, and Tylee Ryan, 17-years-old.

Tammy Daybell had died back in October 2019 of seemingly natural causes, only weeks before Lori Vallow and Chad Daybell got married. However, by December 2019, the autopsy was ruled “suspicious” and Idaho Attorney General Lawrence Wasden took over the investigation of Tammy Daybell?s death.

According to Fremont County prosecutor Marcia Murdoch, they had asked Wasden?s office to consider filing conspiracy, attempted murder and murder charges, but was turned down due to lack of resources. It’s not yet clear if the request to reduce’s Vallow’s bond on the child abandonment charges will be affected by this new investigation.

The mother of two children who have been missing for months was arrested on February 20, 2020, in Hawaii on a $5 million warrant from Idaho. Lori Valllow is officially charged with two counts of desertion and nonsupport of dependent children.

Kauai police stated Vallow failed to comply with a court order to produce her children to authorities by January 30. Police stated there is no indication that Vallow’s children were on the island of Kaua?i. Vallow?s husband, Chad Daybell, was not in custody.

The search for Joshua Vallow, 7, and Tylee Ryan, 17, began in November when Idaho police attempted to conduct a welfare check on Joshua, who has special needs and was adopted. According to the Rexburg, Idaho, Police Department, both were seen in September and both Vallow and Daybell were not cooperating and had left the state. Vallow sand Daybell told authorized Joshua was staying with a family friend in Arizona but investigators learned it was a lie. A witness also told police Vallow had falsely said Tylee was dead.

Rexburg police stated they have learned that Vallow either knows where Joshua and Tylee are or knows what happened to them. Police also believe the children’s disappearance could be tied to an investigation into the death of Daybell?s first wife, Tammy Daybell, 29. She was found dead in her home in October, and Chad Daybell married Vallow weeks later. Vallow?s ex-husband, Charles Vallow, also died last year. He was shot to death in July by Vallow’s brother, Alex Cox.

Vallow is being held in Hawaii on $5 million bail. She will have the opportunity to waive or fight her extradition in Idaho.

After Lori Vallow’s children went missing, making national headlines, Dateline wanted to know more about who Lori Vallow is. We asked close friends to tell us about the Lori they knew… All-new #Dateline Friday at 9/8c. pic.twitter.com/X1mlvALuHW

The Federal Bureau of Investigation has issued a nationwide search alert for two missing children from Idaho. FBI officials believe the two might be in extreme danger. The Rexburg Police Department in Rexburg, Idaho say the mother and stepfather of 7-year-old Joshua Vallow and 17-year-old Tylee Ryan are wanted for question in connection with their disappearance.

The children have reportedly not been seen since September 2019. During a police investigation in November, both the children’s mother, Lori Vallow (who may be using the last name Daybell) and their stepfather, Chad Daybell went missing. At the time, the couple told police Joshua was staying with a family friend in Arizona.

Authorities quickly learned that the information was false. The search for the children began back in November when authorities attempted to do a welfare check on Vallow, who is adopted and has special needs. The family then reported to police they hadn’t seen or spoken with him since September. During the investigation, authorities then learned that Lori Vallow gave them false information about the boys? whereabouts.

As far as Chad Daybell, he is under investigation after his former wife, Tammy Daybell, was found dead in their home in October. Authorities initially believed the woman died of natural causes, but remains have since been exhumed in Utah where she was buried. After an autopsy was conducted in December, authorities are now investigating what may be suspicious circumstances behind the woman’s death. Shortly after her death, Daybell married Vallow.

During the death investigation, authorities learned that the Rexburg children were missing. Lori Vallows’ husband Charles Vallow, died on July 11, 2019, in Chandler Arizona when Lori’s brother, Alex Cox, shot and killed him in what he said was self-defense. Several months later Cox also died, but authorities have yet to provide details surrounding the death.

Police are asking anyone with information about the children to call Rexburg police at 208-359-3000 or report it to the National Center for Missing and Exploited Children.