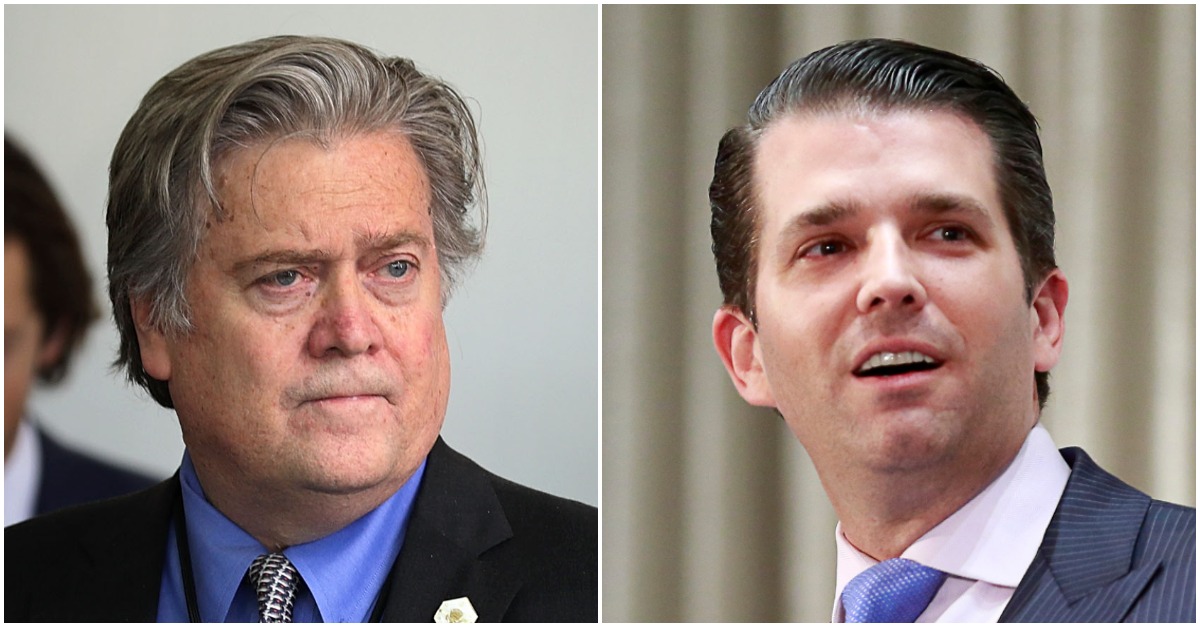 A bombshell report on Wednesday morning turned the nation’s attention to ousted Trump strategist Steve Bannon, as the former adviser made some very harsh statements about Donald Trump Jr., even going so far as to call the eldest Trump son’s actions “treasonous.”

In a conversation with author Michael Wolff, Bannon predicted that the investigations into collusion between the Trump campaign and Russia will focus on money laundering, and that Don Jr. will be a big target. The former West Wing aide added, “They’re going to crack Don Junior like an egg on national TV,” per a report from The Guardian. Wolff spoke to Bannon to get material for his new book, “Fire and Fury: Inside the Trump White House,” which focuses on the inner workings of the current administration.

This isn’t the first time Bannon has slammed the campaign for taking meetings with Russia…https://t.co/fCgb3nXoji pic.twitter.com/bdvlj4VPsk

Specifically, Bannon took issue with Donald Trump Jr.’s meeting with a Russian lawyer in June of 2016. Jared Kushner and then-campaign chairman Paul Manafort were also present at the Trump Tower meeting. In discussing the meeting, Bannon said, “Even if you thought that this was not treasonous, or unpatriotic or bad shit, and I happen to think it’s all of that, you should have called the FBI immediately.” The former Trump-whisperer suggested that, if the meeting was necessary, it should have taken place “in a Holiday Inn in Manchester, New Hampshire, with lawyers who meet with these people.”

Bannon also had some sharp words for Kushner, Trump’s son-in-law. When asked about reports that prosecutors subpoenaed Kushner’s bank records, Bannon said, “The Kushner shit is greasy. They’re going to go right through that. They’re going to roll [Kushner and Manafort] up and say, ‘Play me or trade me.'” Manafort was charged with money laundering in October.

The White House has pushed back on the suggestion that Special Counsel Robert Mueller’s investigation will continue to stab at the president’s inner circle. In an impromptu interview with The New York Times last week, Trump declined to say when he expects the FBI’s investigation to wrap up but said repeatedly that he thinks he will be “treated fairly” by Mueller’s team.

Multiple people told me this morning Trump is infuriated beyond belief at Steve Bannon’s comments about Don Junior. Saying that Trump thinks Bannon is the traitor. They’ve never seen Trump this angry. The sound of their voices? Absolutely terrified. Expect an unhinged response.

Bannon’s remarks were met with scorn by some of his colleagues in the conservative media. Juggernaut reporter Matt Drudge tweeted, “No wonder schizophrenic Steve Bannon has been walking around with a small army of bodyguards.” But Breitbart, the right-wing website that Bannon leads and which is often viewed as a sort of peek into his psyche, went full steam ahead with his statements and pasted them across the homepage.

Donald Trump Jr., who is usually quick to tweet about anything that fires him up, has been noticeably silent on Bannon’s remarks. He has denied several times than anything out-of-bounds happened during his meeting with the Russian lawyer.