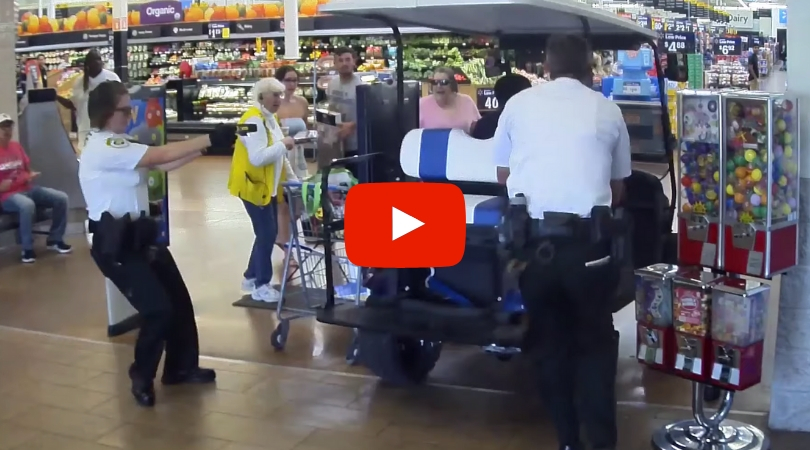 A Florida man gave customers the fright of their life after literally driving a golf cart into the store’s main entrance, hitting several people in his path. Surveillance video shows the moment the car barges into the superstore at high-speed and customers backing away from the man in fear. Several people were hit by the man, while others managed to jump out-of-the-way in time.

Deputies stated 56-year-old Michael Dale Hudson went on a wild ride pretending he was a NASCAR driver, blocking the liquor store entrance in the golf car, refusing to leave and demanding to speak with the manager. According to Hillsborough County Deputies, Hudson sped through a crowded area and smashed the golf cart through the glass doors of the main entrance of the Gibsonton Walmart. The golf craft ultimately stopped when it hit a cash register, and deputies quickly arrested him near the checkout area.

After being arrested, Hudson was taken to the hospital for treatment. He is facing multiple counts of aggravated battery and aggravated assault, resisting arrest without violence, trespassing after a warning and criminal mischief. As far as why the man decided to storm up the Walmart on a golf cart, well, police still don’t know. This man was probably drunk and wanted to buy more liquor and thought that he could speed in and out of the store with the golf car without being noticed.

All jokes aside, this is honestly terrifying. Especially after the mass shooting that occurred a few days ago. Can you imagine seeing this? Just a random golf cart speeding through Walmart? Yeah, I’d probably cry and just fall to the floor and pretend to be dead hoping it’s not another shooting. Oh, and this Walmart store is the same one that was evacuated earlier this week because of a shooting threat.

A day after the El Paso shooting, a man called saying he was going to shoot up the store and nearly 1,000 shoppers were evacuated while deputies investigated the threat. Authorities arrested Wayne Lee Padgett, 31, of Valrico on a felony charge of filing a false report of using a firearm in a violent manner.

Can people just stop trying to be funny for 3 seconds of fame?