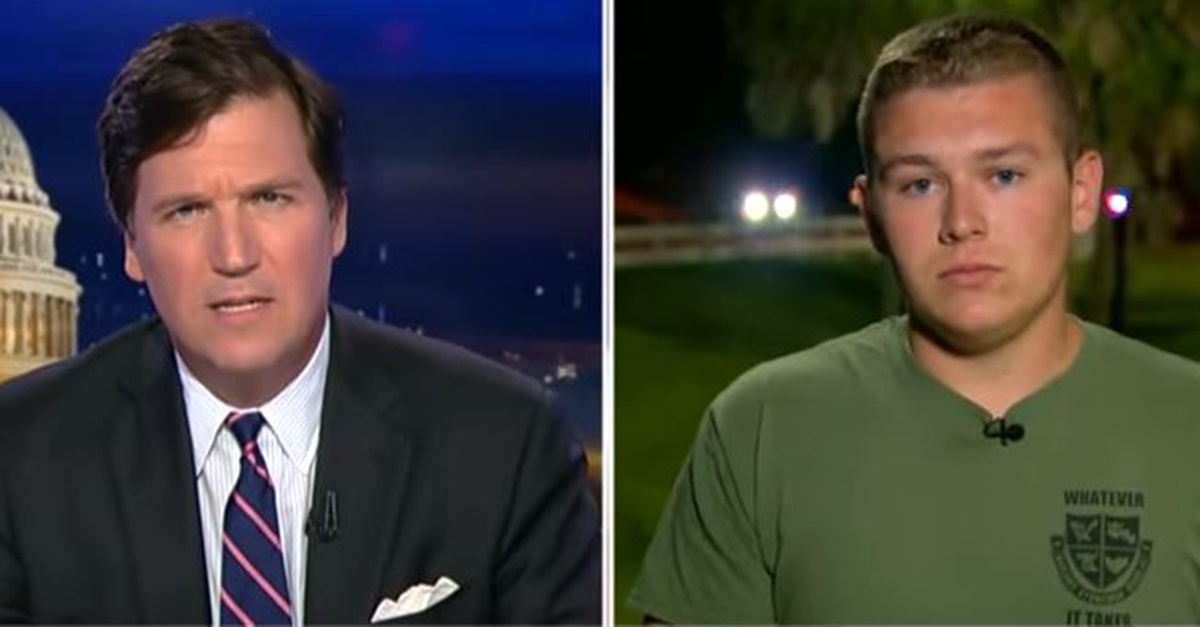 Colton Haab, the Florida school shooting survivor who claimed CNN handed him a scripted question to ask during its town hall Wednesday, has taken his battle against the network to Fox News.

The student appeared with Tucker Carlson Thursday night and reiterated that CNN dismissed the question he wanted to ask and instead “they actually wrote the question.”

CNN has denied the claim, and no other Stoneman Douglas student has backed up Haab’s claim.

Haab is a member of the school’s JROTC program and helped to shield students from bullets using kevlar sheets during the shooting. He told Carlson the question he planned to ask at the CNN town hall focused on whether teachers would be open to arming themselves.

Carlson opened with Haab by asking him if it was correct that CNN asked him what he wanted to ask on the stage and then rewrote his question.

“Yes, sir. So what had happened was four days ago I had gotten contacted by a lady named Carrie Stevenson from CNN. She had asked me originally to just write a speech. It was going to be at the town hall, the BB&T Center. So I agreed. I felt like it would be the right thing to do, be able to go speak my part as well as open eyes to a few things that I thought can make this situation a little better.”

Haab then said he got an email back from Stevenson and she asked for more questions instead of a speech.

“So I gave her my questions and then … I made contact with her. And she had asked if I had just asked her one question. So what they had actually done was wrote out a question for me because in my interview with CNN, I had talked about arming the teachers, if they were willing to arm themselves in the school to carry on campus.”

Haab said his question was rewritten.

“So, I have that question here if you would like me to ask it for you,” Haab, who then decided not to attend the town hall, told Carlson.

“It definitely did. That’s kind of why I didn’t go,” Haab said. “Originally, I had thought that it was going to be more of my own question and my own say and then it turned out to be more of just a script. And, she had actually said that over the phone that I needed to stick to the script.”

Carlson then suggested that if CNN reworded his question, then it is likely they did the same to others who attended and stood up and spoke.

“Absolutely,” Haab said, who questioned why those who asked questions all had the same size paper with a question on it. “And I know for a fact that nobody cut their own paper out and wrote their own question. Especially when they were all based off the same topic. So, to me, from right there, it showed this isn’t correct. … So, to me, it was a total waste of my time, honestly.”