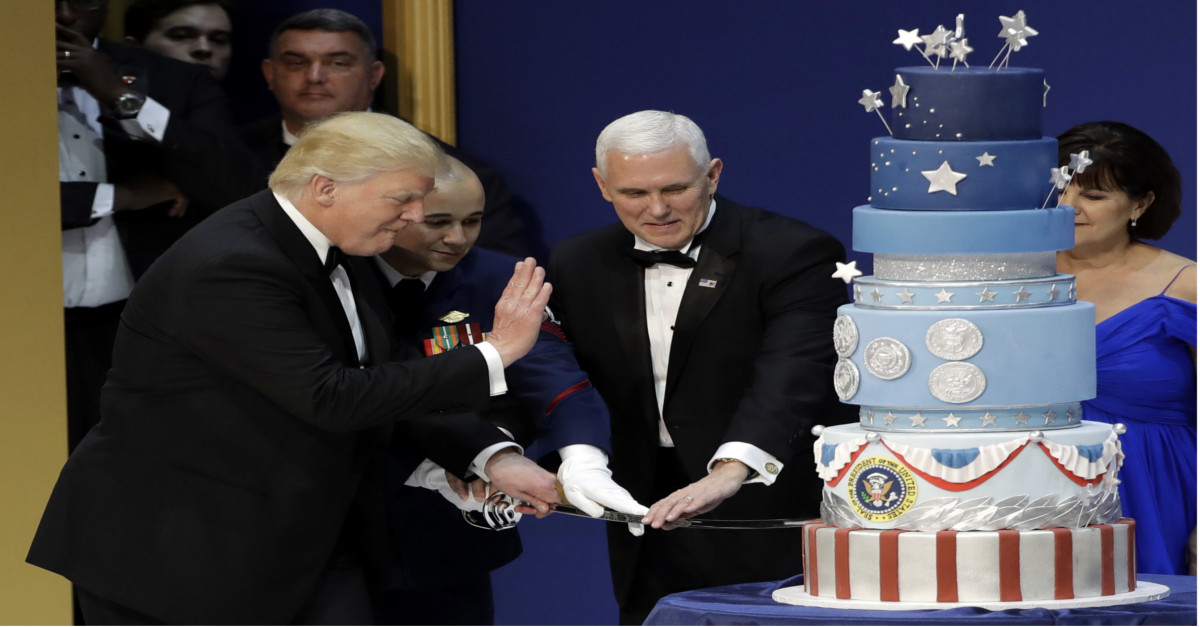 Celebrity pastry chef and Food Network star Duff Goldman took to Twitter Saturday to point out that President Donald Trump?s inauguration cake was an exact replica of the cake he designed and created for Barack Obama?s 2013 inauguration.

In a message posted to his Twitter account, Goldman included a side-by-side image of his cake creation next to Trump?s inaugural cake and wrote, ?The cake on the left is the one I made for President Obama’s inauguration 4 years ago. The one on the right is Trumps. I didn’t make it.

The cake on the left is the one I made for President Obama's inauguration 4 years ago. The one on the right is Trumps. I didn't make it. 🤔 pic.twitter.com/qJXpCfPhii

According to The Washington Post, neither President Trump?s team or Goldman responded to comment requests but that the woman who made the cake came forward to talk about her creation.

Tiffany MacIsaac, the owner of Washington, D.C.’s Buttercream Bakeshop, said that she had been commissioned to create the cake.

She said that a person, who is as of yet unnamed, came in with a photo of Obama?s cake and asked her to recreate it.

?They came to us a couple of weeks ago, which is pretty last minute and said ?We have a photo that we would like to replicate,’? MacIsaac told The Washington Post.

The bakery tried to find out if they wanted to use the cake as inspiration as opposed to an exact replica, but the person who brought in the picture said that they wanted it exactly the same.

?They said, ?Nope, they want this exact cake. It?s perfect.? And we said, great,? MacIsaac said.

Excited to share the cake we got to make for one of last night's inaugural balls. While we most love creating original designs, when we are asked to replicate someone else's work we are thrilled when it is a masterpiece like this one. @duff_goldman originally created this for Obama's inauguration 4 years ago and this years committee commissioned us to re-create it. Best part is all the profits are being donated to @humanrightscampaign, one of our favorite charities who we have loved working with over the years. Because basic human rights are something every man, woman and child~ straight, gay or the rainbow in between~ deserve! (Check out Tuesday's Instagram post to see how much we were able to donate!)

MacIsaac said that she is surprised by all the attention because, per her understanding, the cake was only supposed to be used as a prop.

?It?s just a Styrofoam cake. It?s not for eating,? she said. ?I wasn?t expecting it to be seen on TV.?

?Obviously, my intention was definitely not to upset him in any way,? MacIsaac said about the celebrity pastry chef. ?I just wish that it had not been presented the way that it was.?

Later Saturday, Goldman responded to the controversy with another tweet, where he complimented MacIsaac on the recreation, ?Remembering a fantastic cake I made is awesome, and the chef that re-created it for @POTUS Trump did a fantastic job. Group hug, y?all.?