Stop Tampering With Food at Grocery Stores, It’s NOT Funny! 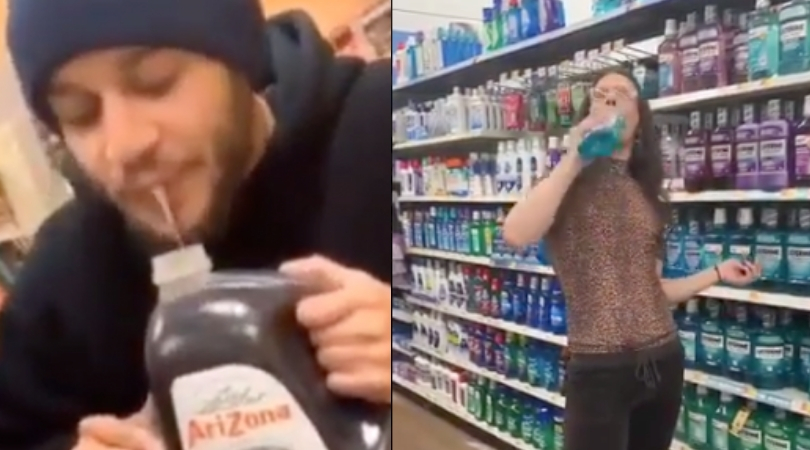 Hey lunatics, stop licking, spitting, gurgling or doing whatever the hell you think is funny to grocery store items and putting them back! Because it’s not funny, it’s gross and insensitive. Turns out there is another moron who was caught in the act of tampering with food. This time it involved an Arizona Sweet Tea and a dumb kid who decided to spit in it and put it back on the shelf.

I seriously think there is something wrong with people these days if this is how they are getting their viral hits. It’s dumb, and anyone who thinks is hilarious is just plain wrong. As you can see, clearly all these idiotic behaviors are spreading and honestly, it’s time to put an end to this.

RT until he is arrested!pic.twitter.com/j6hFlUNEp0

Did you not read that the “original” woman who licked the blue bell ice cream could face 2 to 20 years for tampering with it? She literally faced a second-degree felony charge of tampering with a consumer product. BUT, since she’s a minor, she was charged within the juvenile justice. Which I mean, she got off lucky. But this should have been incentive enough, honestly.

What you’re telling me by doing these videos is that you are risking 20 years in jail for nearly 6 seconds of internet fame. Good luck trying to get someone to take you seriously, bro. Also, if you’re going to do this, which you shouldn’t, you should at least do it on private social media platform and not one where your full user name is shown.

Honestly who is raising these monsters pic.twitter.com/DDpZBFqMNG

This passive-aggressive food terrorism has gone too far. Just last week a Louisiana man was arrested by law enforcement officers for attempting to replicate the viral video of the ice-cream licker. This man was able to prove that he had actually purchased the ice cream, but nevertheless, it’s stupid. Why risk it? Plus, at this point in time, all food tampering jokes have been done. Now you’re just a poser, get a little more creative. All you’re doing is spreading bacteria and diseases that nobody asked for and can be avoided.

If you really want to lick ice cream, drink some tea or wash your mouth with Listerine, then just freaking buy the product. It’s affordable, you can splurge on a $5 product. What’s next? Eating a whole rotisserie chicken and putting back?