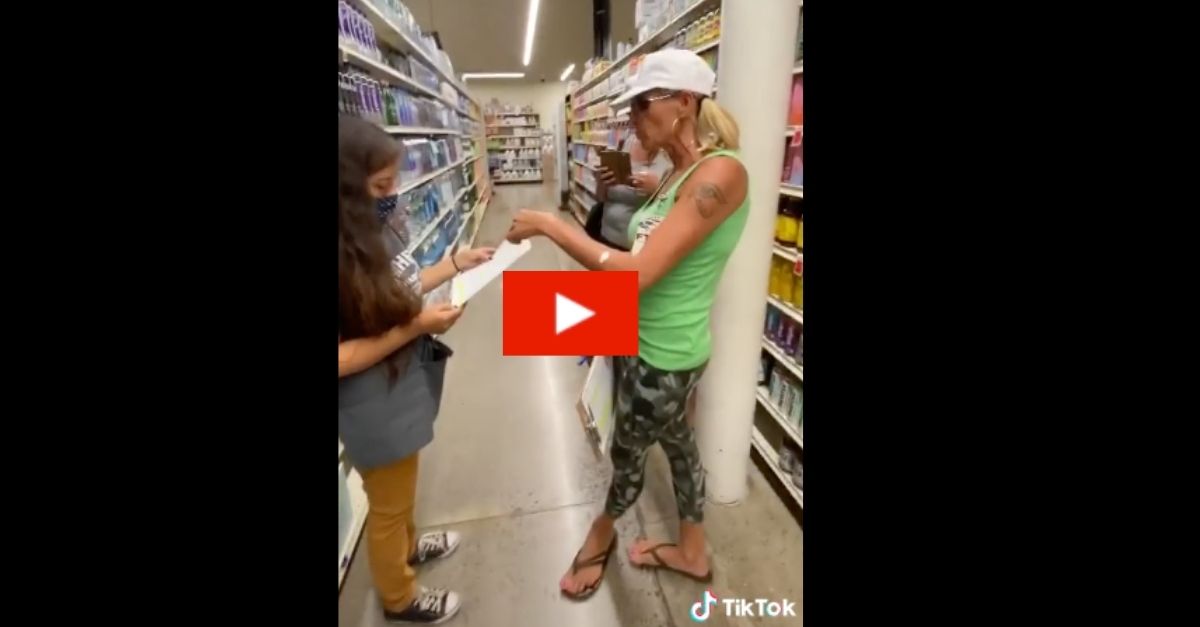 Videos like these ones infuriate me. Liz Chavez of Orange County, California, already probably has to deal with so much as a grocery store supervisor, especially being considered an essential employee as a result of the coronavirus pandemic. Wearing a face mask for a full shift, while also having to push aside the worries of getting COVID-19 infected can’t make for an easy job. But having to also deal with idiots like the ones from a made-up government agency called the “FTBA” or also known as the “Freedom to Breathe Agency,” would probably really push me over the edge.

Liz was just going about her day, as she’s now used to having to tell customers that they can’t shop in the store without a face mask, when the FTBA’s founder, Lenka Koloma, responded to Liz’s request that she and her fellow peer wear face masks with a rant that signified that they weren’t there just to shop. Wearing their stupid “FTBA” badges, a viral video on Tiktok shows Lenka telling Liz, “No, we’re not required to wear a mask,” followed by an explanation that they were, “making sure that people’s constitutional rights, civil and federal laws are not broken.”

Lenka handed her a paper while saying, “You personally need to take this to your manager because you personally can be sued for this, OK?” as well as, “You are putting yourself in a major legal liability- you personally.” Liz told Buzzfeed News that the paper described how she could, “go to prison for up to three to five years and [she] could get fined up to $10,000 for telling them to wear a mask if [she’s] not a doctor.” It’s pretty obvious that this is a scare tactic and not even close to remotely true.

@wittlelizzyThis is what it?s like to be an essential worker. ##essentialworker ##covid19 ##karen ##helpme ##foryou? original sound – wittlelizzy

The FTBA is known for handing out “face mask exempt” cards that mock medical cards saying someone is allowed to NOT wear a face mask “under the Americans with Disability Act,” which is a play on the actual “Americans with Disabilities Act” or the ADA. The Department of Justice has warned that these cards mean nothing since the FTBA isn’t an actual government agency. US Attorney Matthew G.T. Martin said, “Do not be fooled by the chicanery and misappropriation of the DOJ eagle. These cards do not carry the force of law.”

Lenka also commented on the incident to Buzzfeed saying that she and her peer “both have medical, health conditions and also religious beliefs that do not allow [them] to wear a mask.” She didn’t explain what these so-called “medical conditions” or “religious beliefs” are. She furthermore explained that she believes Liz could face legal action, simply because she’s impersonating a doctor by telling people they’re required to wear masks.

But I’m happy to report that California’s government has mandated that, “To prevent infection, you must cover your nose and mouth when outside your home. So wearing a mask is now required statewide,” also specifying that if you’re leaving your home, you should wear a face mask. So hah, in your face Lenka Koloma.

Liz is obviously seen in the trending video, shocked by what she actually was experiencing. She told Buzzfeed, “I just want to say people really need to be nice to these grocery workers ? we work our butts off during this pandemic. Just give us a little break. It?s just our store policies. We?re following the rules. We don?t need to be attacked every day.”

I’m with you, Liz. Wear your face masks people. Don’t be that guy, or girl, for that matter.