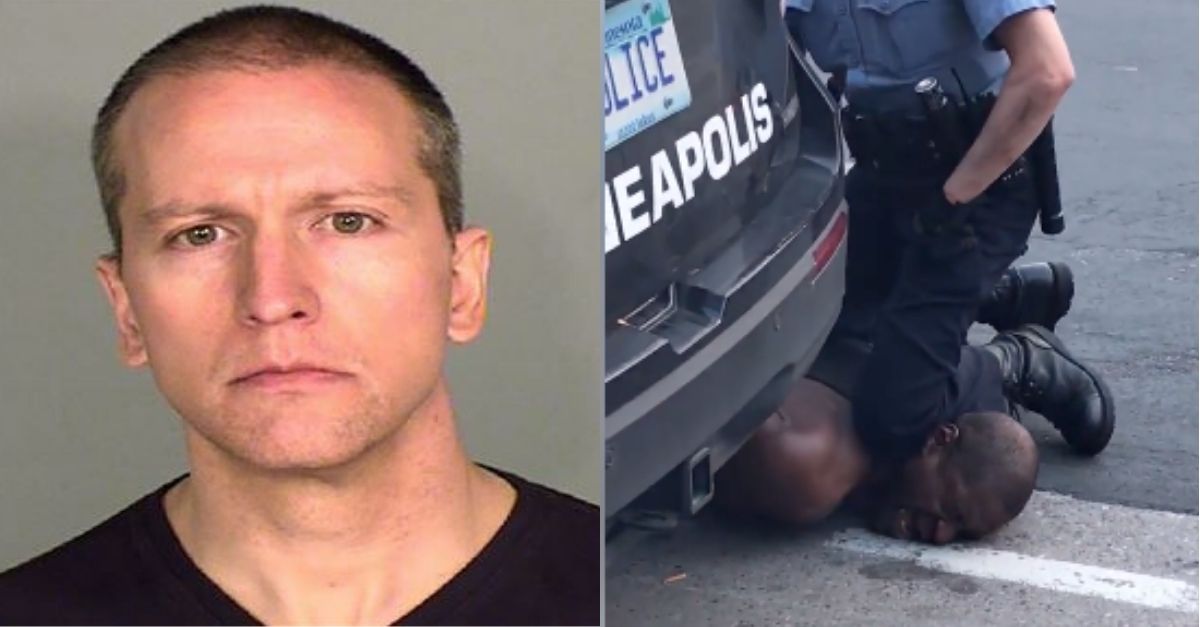 Editors Note: This article was originally published on May 27, 2020. It was updated on June 3, 2020, after authorities stated Chavin now faced 2nd-degree murder charges, and the three other officers involved were charged.

Authorities have announced that all four police officers involved in the killing of George Floyd are now facing charges. Minnesota Attorney General Keith Ellison increased charges against Derek Chauvin to a  second-degree murder charge in Floyd’s murder. Benjamin Crump, Floyd’s family attorney, implored officials to hold all other officers accountable in powerful remarks at the side of Floyd’s killing.

The incident has sparked several mass protests around the world over questions of police brutality and racial inequality. Attorney General Ellison did note his office will continue to investigate the situation and will upgrade the criminal charges to first-degree murder if there is enough evidence to support it.

Floyd was a 46-year-old African American man who was killed by officer Chauvin on Memorial Day. Chauvin, who is also charged with manslaughter, knelt on his neck for more than eight minutes. Chauvin, Tomas Lane, J.A. Keung, and Tou Thao were fired the day after the incident. An autopsy commissioned by Floyd’s family and the Hennepin County Medical Examiner’s office ruled Floyd’s death was a homicide. A medical examiner’s report listed “cardiopulmonary arrest” as the cause, while the family autopsy stated “asphyxiation from sustained pressure.”

Editors Note: This article was originally published on May 27, 2020. It was updated on June 1, 2020, after an independent autopsy was released, noting George Floyd’s death was “asphyxiation from sustained pressure.”

An autopsy commissioned by George Floyd?s family has determined that Floyd’s death was due to ?asphyxiation from sustained pressure.” This after the tragic incident which sparked several protests across the United States.

Dr. Michael Baden and Dr. Allecia Wilson performed the autopsy, stating there were back and neck compressions which led to a lack of blood flow to the brain. According to the family attorney Benjamin Crump, ?weight on the back, handcuffs, and positioning were contributory factors because they impaired the ability of Mr. Floyd?s diaphragm to function.”

"What you see on the video is exactly what happened," Floyd family attorney asserts. "Those police officers were the proximate cause of George Floyd's death."

The remarks come as attorneys for the family announce early findings from independent autopsy. https://t.co/F97hlpK0GA pic.twitter.com/vBT8yXposT

The 46-year-old died on May 25th after a Minneapolis police officer, Derek Chauvin, had his knee on his neck for a total of eight minutes and 46 seconds while he was handcuffed on the ground. Floyd was repeatedly heard telling officers he couldn’t breathe, pleading for help. Results of the family’s autopsy differ from a preliminary autopsy report which was described in a criminal complaint against the officer charged in Floyd’s death.

That autopsy found “no physical findings that support a diagnosis of traumatic asphyxia or strangulation.” Documents suggested Floyd’s existing health conditions, which were hypertensive heart disease and coronary artery disease, combined with being restrained by police officers and any ?potential system? contributed to his tragic death.

Wilson and Baden stated it appeared that Floyd had indeed died at the scene. Baden stated, “What we found is consistent with what people saw. There is no other health issue that could cause or contribute to the death. Police have this false impression that if you can talk, you can breathe. That?s not true.”

Officer Derek Chauvin was arrested and charged with third-degree murder and manslaughter. He is in custody in state prison and is now under a suicide watch. Three other officers who were on the scene have not yet been detained or charged with any crimes. All of the four officers were fired on the day of the incident.

Editor’s Note: This article was originally published on May 27, 2020. It was updated on May 29, 2020, after authorities announced the arrest of Officer Derek Chauvin.

Derek Chauvin, one of the four Minneapolis police officers connected to George Floyd’s death, has officially been arrested. Chauvin is the former officer seen in a video kneeling on Floyd’s neck. He had worked with the Minneapolis Police Department for 19 years. Public Safety Commissioner John Harrington confirmed the news, stating Chauvin was taken into custody by the Minnesota Bureau of Criminal Apprehension.

The officer’s arrest comes after 3 days of protests, which escalated as protesters set several fires inside and outside the Minneapolis Police Department’s 3rd Precinct building. Chauvin was charged with murder and manslaughter. The three other officers who witnessed George Floyd’s killing are expected to be charged as well.

Four Minneapolis police officers are under investigation following a fatal encounter between police and an unarmed 46-year-old black man who was pinned down by the neck. According to Minneapolis Police Chief Medaria Arradondo, the four officers are now ?former employees? and have been terminated.

The video, which has gained several social media views, shows a man, George Floyd, verbally groaning and repeatedly saying “I can’t breathe” to the white police officer. Several are relating the incident to that of Eric Garner, a black man who died after being arrested in New York City back in 2014.

This really bothers me because of the fact that he was begging for the cops to get off his neck and let him breathe, his life was stolen from him by cops who were told numerous times that he couldnt breathe #GeorgeLloyd pic.twitter.com/qnsmM1UxvH

The encounter between the officers and Floyd occurred when police were called to the 3700 block of Chicago Avenue South to report a man attempting to use forged documents at Cup Foods. That’s when officers found Floyd in a car at the scene and appeared to be intoxicated. Law enforcement officers quickly ordered the man to get out of the car. According to a police spokesman, John Elder, when Floyd got out of the vehicle he physically resisted officers. He noted, ?Officers were able to get the suspect into handcuffs and officers noticed that the man was going into medical distress.?

Minutes after his arrest, an ambulance took Floyd to Hennepin Healthcare where he, unfortunately, died due to his injuries. After his death, the viral 9-minute video shows a white officer pressing his knee to Floyd’s neck near his squad car. While lying down on the road, Floyd is repeatedly saying he can breathe as one by bystander tells a white officer, ?He?s not even resisting arrest right now, bro. You?re f?ing stopping his breathing right now, you think that?s cool??

MORE: Video obtained by CBS News shows what appears to be the start of the confrontation between George Floyd & Minneapolis police officers. A restaurant's security footage shows cops taking him into custody, but the restaurant owner says it does not show Floyd resisting arrest. pic.twitter.com/KR8r7B1WPl

Five minutes later, Floyd stops moving and appears to be unconscious. The crowd is then heard begging the Minneapolis officers to check for Floyd’s pulse but the officer does not lift his knee until medical personnel arrives. The FBI stated it will investigate the Minneapolis incident, which took place Monday, May 25th. According to Minnesota police, the 46-year-old, who was a security guard at a restaurant, died after a “medical incident” occurred in a police interaction.

Minneapolis Mayor Jacob Frey conducted the press conference saying Floyd’s death was ?completely and utterly messed up.? Through a tweet Former Vice President Joe Biden also reacted to the death, saying the man deserved better and Floyd’s family deserves justice. Minnesota is now calling for the officers involved to be held accountable for their actions.

I'm grateful for the swift action in Minneapolis to fire the officers involved — they must be held responsible for their egregious actions. The FBI should conduct a thorough investigation. https://t.co/n1tdiUba0x

Rep. Ilhan Omar Who represents Indianapolis, called the Department of Justice to investigate the incident immediately. Through a statement, she stated, “it is sickening to watch as black man be killed while helplessly begging for help.? Lt. Governor Peggy Flanagan and Governor Tim Walz also reacted to the video, calling it disturbing and demanded justice.

Officials from the FBI Minneapolis division released a statement, stating the ?investigation will focus on whether the Minneapolis Police Department officers involved willfully deprived the individual of a right or privilege protected by the Constitution or laws of the United States.?

Social justice seeks especially to protect the vulnerable, including the very young, the very old, the unborn, the terminally ill, the disabled, the poor, the unpopular, and the excluded. Social justice also seeks to energize the able and the powerful towards virtue, thrift and change. It shouldn’t seek to destroy but to build. Social justice must also safeguard essential liberties rooted in human dignity and God’s character. Churches should advocate social justice in the sense that society needs constant moral reform, and the church’s chief tool in this advocacy should always be the gospel itself. We pray for Mr. George Floyd’s family and friends. May they feel the presence of love, may our fair and just God bring justice over his life, and wisdom to those who can make a positive difference. • • • #georgefloyd #icantbreathe #justiceforall #socialjustice #standtogether #mercyandjusticeforall #moralreform #advocacy #humandignity #churchinvolvement #communityoutreach #takeastand #thoushaltnotkill #blacklivesmatter #justiceforgeorge