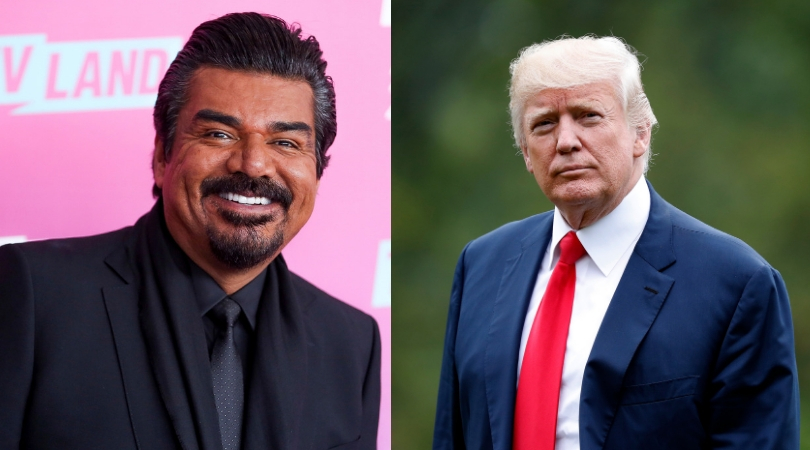 George Lopez might’ve been hiding in his home for a little while. It’s no secret that Lopez isn’t a fan of Donald Trump. He was very vocal about his opinion in regard to the President’s impeachment trial. But this time around, the comedian had triggered very strong reactions online after he joked about literally assassinating the President for $40 million.

The 58-year-old responded to an Instagram post by user Chicano Worldstar regarding the killing of Iranian General Qasem Soleimani by a targeted US drone strike last week. This after Iranian authorities reportedly place an $80 million bounty on Trump’s head.

Chicano Worldstar asked, “#Iranian authorities have put a bounty on American President Donald Trump’s head during the televised funeral of General #QasemSoleimani after he was assassinated last week. What are your thoughts?” Lopez quickly responded through the comments stating, “We’ll do it for half.”

Trending on Twitter, his comment prompted hundreds of tweets from users both Democrats and Republicans. Several users found the joke funny, but several accused him of incitement to violence. Because well, it’s a serious accusation. Can’t you get arrested for making these types of threats online? But, I will say this, the President has had his fair share of tweets, so what’s a simple joke? Still, I hope the secret service doesn’t get a hold of the comedian.

Calm down trump cult! @georgelopez is a professional comedian and…OH FUCK OFF. THIS JOKE IS HILARIOUS & you all know it. #impotus #trumpfail #comedy pic.twitter.com/T5QblH07kF

Lopez, who is best known for the ABC sitcom George Lopez and TBS talk show Lopez Tonight, also made headlines July 2018. The Latino stand-up comedian pretended to urinate of Trump?s star on the Hollywood Walk of Fame using a water bottle. The footage obviously went viral and promoted similar rights with offense to this incident, including several calls for Lopez?s arrest.

This time around, a spokesperson for Lopez confirmed that the comment was “absolutely a joke and that’s it.” According to the United States Code Title 18, Section 871, making any “threat to take the life of, kidnap, or to inflict bodily harm upon the President of the United States” is indeed a federal crime. It can be punishable by up to five years in prison with a maximum fine of $250,000.

Soleimani was a major-general in the Islamic Revolutionary Guard Corps and a commander of Iran’s Quds Force. Iran’s Quds Force is a division primarily responsible for “extraterritorial military and clandestine operations.” Soleimani was killed on January 3rd after left Baghdad Airport by missiles fired from a US Air Force Reaper drone.

President Donald Trump justified the attack saying Soleimani was a terrorist who was responsible for countless American deaths, and the strike would deter any more in the coming future. The move attracted several criticisms from commentators who accused Trump of violating international laws while engaging in acts of war. Iranian Supreme Leader Ali Khamenei warned, “reaction is waiting.”

Watch: Love Trumps Hate in Sturgill Simpson’s Video for ‘All Around You’