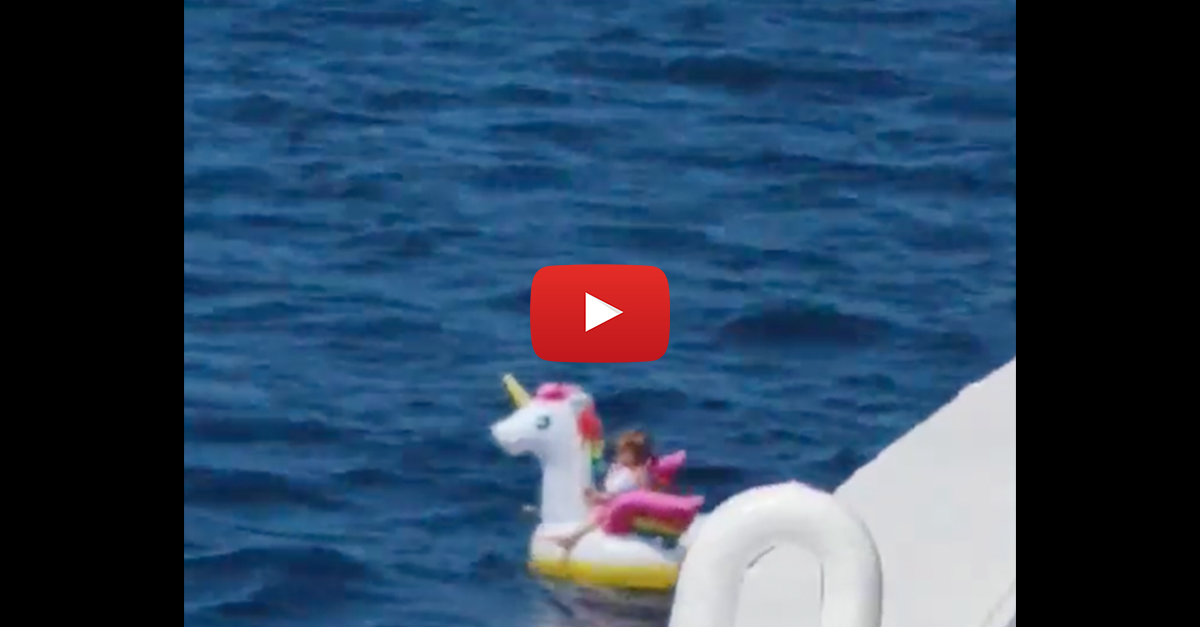 A 3-year-old girl was saved somewhat miraculously after a freak accident at the beach nearly caused the unthinkable to become reality.

The girl was enjoying a day at the beach with her parents in the beach town of Antirrio in southern Greece, floating happily on a unicorn raft, when a gust of wind pushed her away from her parents and out toward the open ocean. The girl’s father frantically attempted to swim after her, as did other beachgoers, but could not reach the little girl. The parents and others then grabbed a dingy and attempted to row after the girl but could not overcome the current.

Greek authorities were alerted and notified a nearby ferry captained by Grigoris Karnesis, who was charged with trying to save the girl. Though a veteran captain of Greek ferryboats, Karnesis had never seen anything quite like this. Ferry passenger Petros Kritsonis filmed the dramatic rescue.

When abandon can end in tragedy…
Congratulations to the captain and the crew of the Salaminomachos ship for the actions that brought the positive ending.
The video post is not intended to blame, but to demonstrate the risk of marine toys that we all use.

According to those on the scene, the terrified and no doubt confused little girl’s screams could be heard from the boat.

Karnesis said that he was shocked to see the small girl so far out to sea on the raft, which he claimed was moving fast thanks to the wind. The captain was able to steer his vessel in such a way that he was able to stop the girl’s progress and direct her toward the boat.

Upon her rescue, Karnesis said the girl was in shock and couldn’t speak. Once reunited with her parents the girl’s mother was equally speechless.