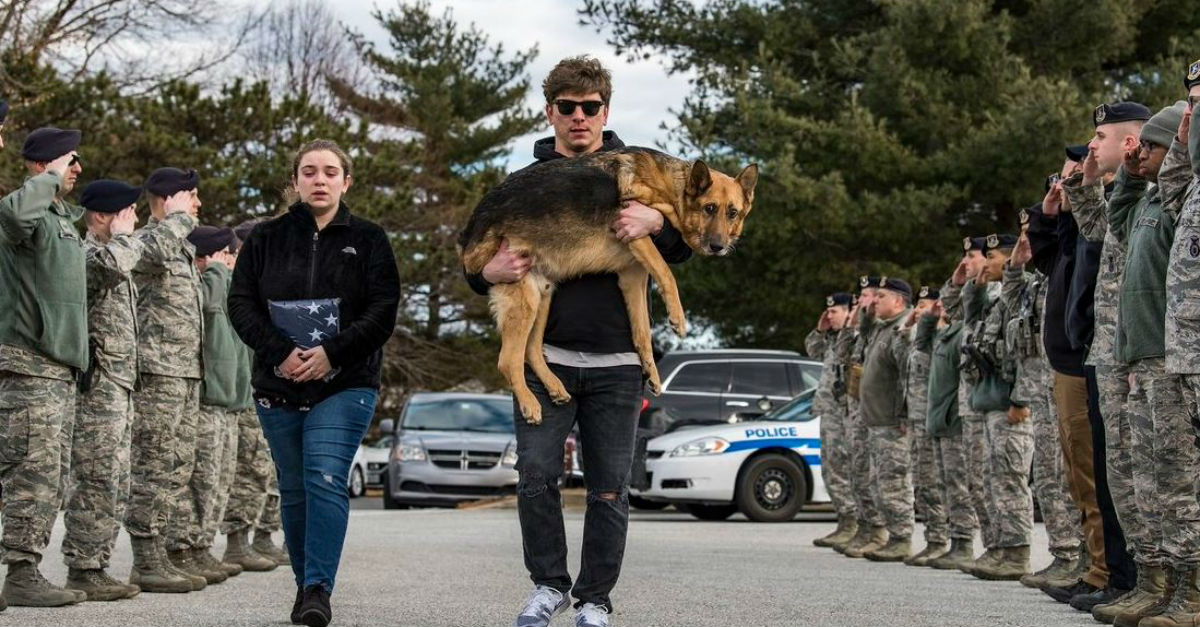 U.S. Air Force veteran Rico, who served as a military working dog for eight years, is the latest canine hero to capture hearts after the German Shepherd was given a final salute last month.

The United States Department of Defense shared a photo of Rico as he passed through the saluting members of the 436th Security Forces Squadron. The dog was suffering from a spinal cord disease and was put to sleep at veterinary treatment facility after the ceremony, which took place on January 24th, 2018, at Dover Air Force Base in Delaware. Rico’s handler, Tech. Sgt. Jason Spangenberg, carried him through the procession.

Members of the 436th Security Forces Squadron say farewell to retired military working 🐶 Rico as his former @USAirForce handler carries him to the veterinary clinic. Rico was suffering from a spinal cord disease. We thank him for his dedicated service. pic.twitter.com/02YgcKChhv

In a press release from the Dover Air Force Base, Rico’s first handler, Tech Sgt. Matthew Salter, is quoted as saying “It’s hard to describe the loss I feel. I know Rico is in a better place and is running around again finding bombs and biting bad guys, but it’s also sad because my partner isn’t around for me to see whenever I need that look he would give. He had a way of saying, ‘Get up dad, time to work.'” Rico retired in January of 2016 after he and Spangenberg earned bronzes star for selfless service while deployed on over 100 combat missions in Afghanistan in only four months. The dog lived with Spangenberg for the final two years of his life.

Rico had a storied career as a military dog, serving a total of three handlers throughout several overseas deployments; he also helped out the Secret Service on dozens of missions. Spangenberg echoed Salter’s comments, saying, “The bond that Rico and I shared was special. It started off as partners. We then deployed, and it completely changed. We became family. I needed him and relied on him to keep me and the others around us safe.”

Spangerberg called the ceremony “amazing,” adding, “So many fellow defenders and friends came out, which made it super special.” Rico was also given a last call and moment of silence over the radio transmissions.