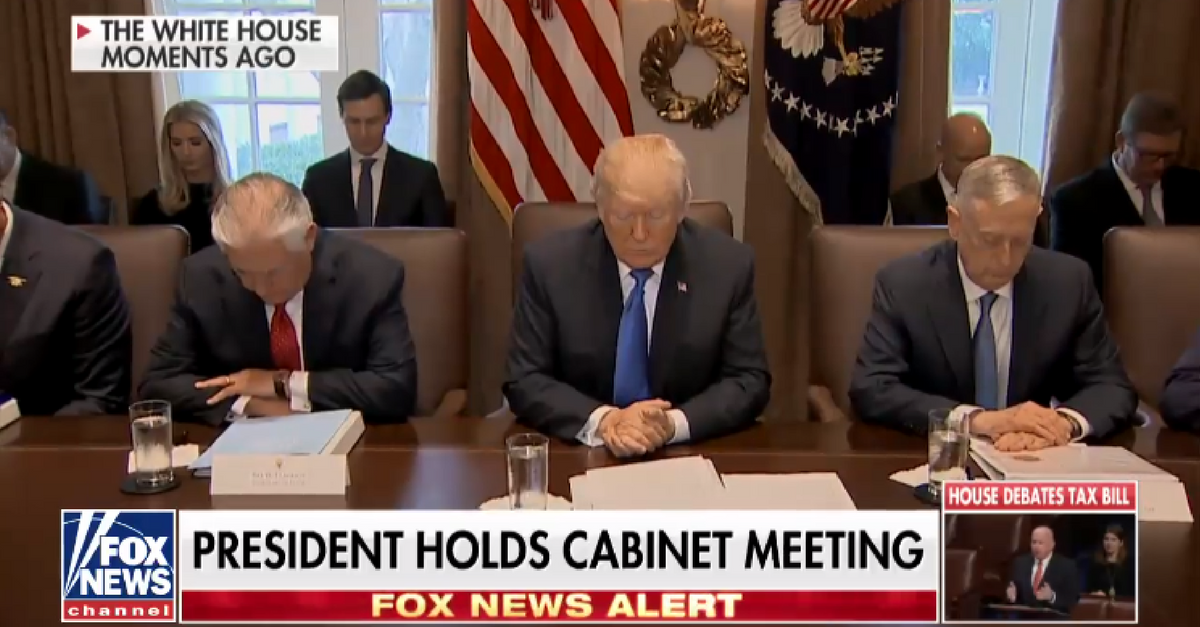 Ahead of the passage of the GOP tax plan, President Donald Trump called upon Housing and Urban Development Secretary Ben Carson to lead the rest of the White House Cabinet in prayer.

Before handing the microphone over to Carson, the president told reporters they could remain in the room for the prayer for one reason.

“You need the prayer more than I do I think, you may be the only ones,” he told members of the press. “Maybe a good solid prayer and they’ll be honest. Is that possible?”

RELATED: Trump’s “Christmas gift” tax bill for the American people is now all but wrapped and ready for delivery

Once in possession of the microphone, Carson thanked God for both the president and our Republican-controlled Congress, praising the “unity” between the House and the Senate in passing massive tax cuts this week that aim to “fight the corrosive debt that has been destroying our future.”

Our kind father in heaven, we’re so thankful for the opportunities and the freedom that you’ve granted us in this country. We thank you for the president and for Cabinet members who are courageous, who are willing to face the winds of controversy in order to provide a better future for those who come behind us. We’re thankful for the unity in Congress, that presented an opportunity for our economy to expand, so we can fight the corrosive debt that has been destroying our future. And we hope that unity will spread even beyond party lines, so that people recognize we have a nation that is worth saving. And nations divided against themselves cannot stand. In this time of discord, distrust and dishonesty, we ask that you will give us a spirit of gratitude, compassion and common sense. And give us the wisdom to be able to guide this great nation in the future. We ask in the name of the father, the son and the holy spirit, Amen.

Although Carson’s prayer appears to indicate that the tax cuts will reduce the national debt, economists have disputed that claim. Tax policy institutes around the country have reportedly predicted that the cuts will add over a trillion dollars to the national debt, while the University of Pennsylvania Wharton School — which President Trump himself attended — has even estimated that the debt would increase by between $1.9 trillion and $2.2 trillion.

RELATED: “TODAY” host’s Paul Ryan interview on the tax bill got awkward with one question