Should women vote? A politician is doing major damage control after apparently suggesting no 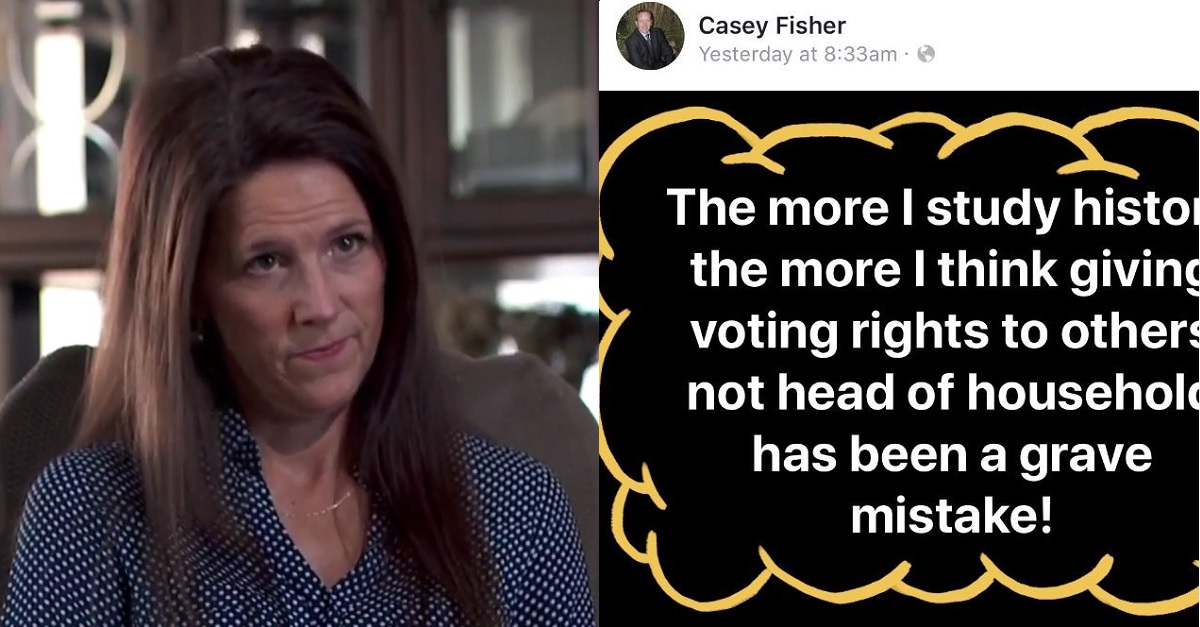 A Republican party elections official from Utah now says he “full heartedly support[s] the rights of all women and men to vote” after writing a Facebook post over the weekend that appears to read otherwise.

Before being taken down, the post from Davis CA politician is doing serious damage control after a Facebook post that seems to regret that women can vote, County Precinct Chairman Casey Fisher said:

The more I study history the more I think giving voting rights to others not head of household has been a grave mistake!

Chair of @DavisGOP, @teenahorlacher says the comment below by a one of her precinct chairs was “in line with what the founding fathers believed.” #utpol #Utah #metoo pic.twitter.com/7bYDZzmak8

RELATED: Montana Republican does the unthinkable one day after he allegedly “body slammed” a reporter

Fisher has deleted the post and his Facebook account since posting the remark, according to the Salt Lake Tribune. Before being deleted, the remark had generated over 100 comments. Fisher says he has received “threats and harassing comments about me, my family, and my beliefs” after the remark and did not feel “safe.”

Davis County Republican Party chair Teena Horlacher defended the post in the immediate aftermath, saying that the outrage was “politically motivated” and “ridiculous,” according to KUTV. Fisher’s beliefs, she said, were “in line with the beliefs of the founding fathers.”

In a matter of days, however, she reversed her position, telling KUTV in a follow-up interview that she denied supporting the post in “any way” and denied saying the comments were “in line with the beliefs of the founding fathers.”

Fisher, too, has apologized for his remarks in a lengthy statement, writing in part:

The Facebook post in question is not an opinion I hold. It was a poorly written statement to spur discussion between facebook friends about a subject I had been studying, that of the desintegration of patriarchal families.

I was wanting to create a space and discuss peoples thoughts on whether the step away from patriarchal families led to the decreased discussion of politics in the home and in turn becoming a taboo topic.

I did not create the post in any way to deny the voting rights of women.

After complaining that readers of his post were “stuck on their own thoughts and beliefs and not willing to hear the actual topic of discussion,” he concludes by encouraging “all men and women to become involved in politics.”