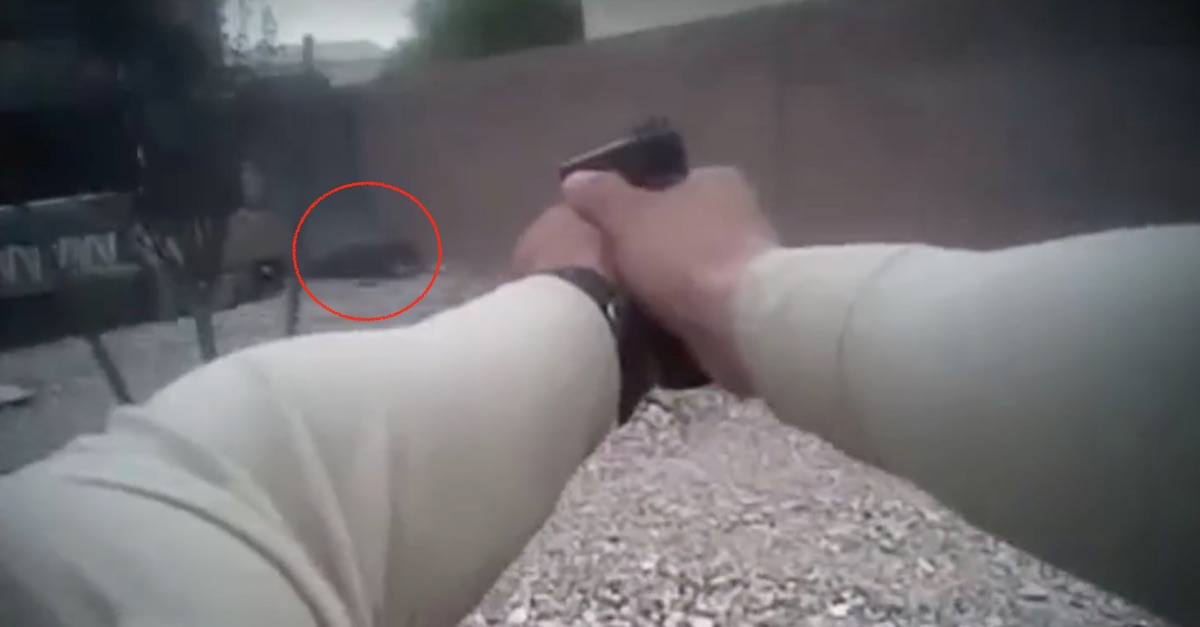 Warning: you may find this video disturbing.

The Metropolitan Police Department in Las Vegas, Nevada, has released footage of a wild incident on Monday that showed a field training officer and his trainee firing 26 shots and hitting an armed man 19 times without killing him.

Police addressed the incident at a press conference on Thursday while sharing clips of the body camera footage. You can watch that press conference above in its entirety, but for the relevant body cam footage itself, look just below.

William Chafoya, 37, can be seen ditching a red Honda believed to be stolen, letting it roll into a parked car and running towards a house while carrying a gun. The man inexplicably fired off a round into the air and Assistant Sheriff Todd Fasulo said Chafoya also shot in the direction of officers Tyler Hebb, 35, and Brandon Foster, 22.

That’s when the officers opened fire. The two had been investigating a non-fatal Sunday shooting of a person on a bicycle when they spotted the red vehicle they believed was involved and attempted a traffic stop.

As you can see, things quickly went off the rails.

RELATED: A naked man opened fire from a boat in a crowded harbor, and it was the last thing he would ever do

While neither officer was hurt, Chafoya and 31-year-old Ashley Olivetti, seen in the video at the front door, were wounded. Chafoya was hit an astounding 19 times and, though he bled profusely at the scene, he has survived.

Olivetti was shot in the arm. Police initially said that Chafoya shot her, but that was not the case. She was shot by an officer. Both are listed in stable condition.

According to the Las Vegas Review-Journal, both police officers have been placed on paid administrative leave.