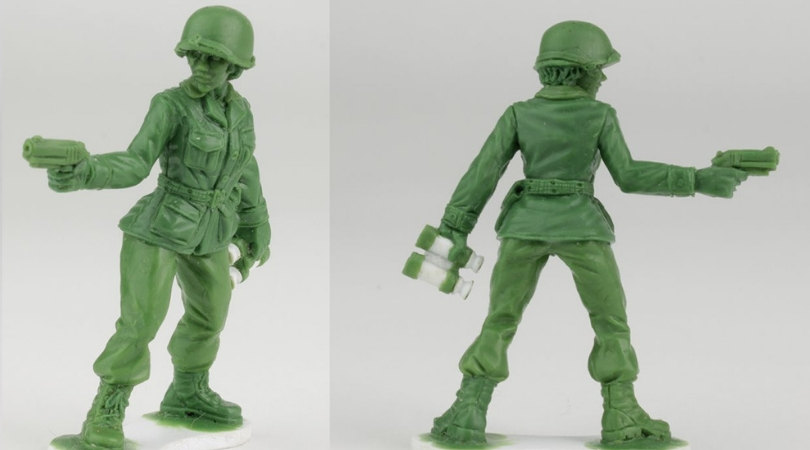 It’s time to celebrate, women! Green Army women figurines are finally on their way, and we couldn’t be more excited. A toy manufacturer in Scranton is using a little bit of imagination in their own fight for equality. The small operation is one of the only makers of the classic green Army men and will soon be expanding the line to include Army women.

As we all know, these little green toys have been a classic favorite for children, especially after they hit the big screen in Toy Story. Jeff Imel, who owns BMC Toys in Scranton stated the little green Army men will never go out of style, which is why they decided to expand their factory. BMC is one of the only producers of the toy left in the United States. Since they became popular in the 1950s, no one has “broken the mold” of the beloved army toys today.

Imel stated that only a few hundred thousand soldiers march out of the toy factory in Penn Avenue every year. But, starting next year, new female combat toy soldiers will make their rounds as well. So, how did the whole idea of female soldiers come to light and why did it take us so long? Well, the news comes weeks after a complaint letter was sent by an unsatisfied 6-year-old girl from Arkansans saying there was a lack of Army women figures. Yes, a six-year-old stood her ground and decided to make a change. Little Vivian Lord is going to be a leader when she grows up.

Lord wrote how she couldn’t relate to the soldiers since no one looked like her. The letters stated, “Why do you not make girl army men? Some girls don?t like pink, so please can you make army girls that look like women?” After reading her letter, BMC Toys decided to begin to produce the women figurines. Which I think is brilliant because there are a lot of girls out there who can look up to these toys.

So, Imel rounded up his troops and quickly realized that there were” enough folks” looking for Little Green Army Women as well, so he decided to go along with the process. The Army women will come in the same poses made famous by the male figurines in order to “fit in with a wide variety of the plastic figures that are already in several generations of toy boxes.” The new sets are scheduled to be released in Fall 2020. It’s time to break the gender norms, ladies and gentlemen.