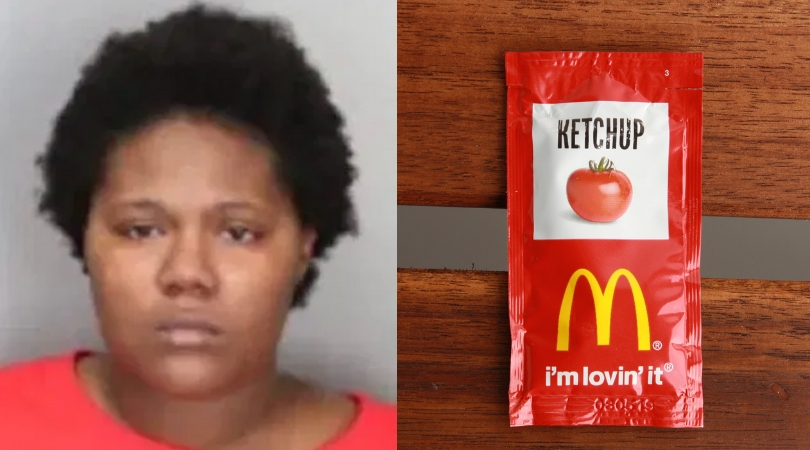 There is nothing worse than fighting over condiments at a McDonald’s drive-thru. Paying 40 cents for extra buffalo sauce to me seems insane, especially since you’re buying a whole freaking meal. But hey, that’s America for you, whenever people can charge more, they will charge more and I get it. But just because they’re going to charge me more means that I’m going to get so angry that I’m going to pull a gun on employees.

Well, technically this woman wasn’t angry because she had to pay for the condiments, but because they messed up on the one she wanted. Yes, a Tennessee woman is facing felony charges after she decided to pull out a gun on a McDonald’s employee over condiments. So dumb, so ridiculous, so unnecessary.

According to authorities, three employees told police that they were working at the Memphis McDonald’s when suspect Asia Vester ordered in the Drive-Thru line. When she received her food, she immediately became upset because she was given ketchup instead of jelly. An honest mix-up if you ask me.

After some words were reportedly exchanged at the fast-food restaurant, the 20-year-old suspect pulled a page from a reality TV show and pointed a gun at the employees before driving away. Probably wanting to show off she was a “badass.” Which she’s not.

Police were able to obtain a security video of the incident and identified Vester as a person of interest in the case. She was arrested and charged with three counts of aggravated assault and unlawful possession of a weapon. Since Vester is under the age of 21, it is illegal for her to possess a gun. Concealed Carry is legal with a license or permit in Tennessee, but one must be 21 years of age or older. She is now out on Bond and is going court next week, but I’m pretty sure she regrets her actions.

Because well, in a moment of frustration and hunger, maybe pulling out a gun isn’t the best way to deal with this situation. It’s called manners and words lady.