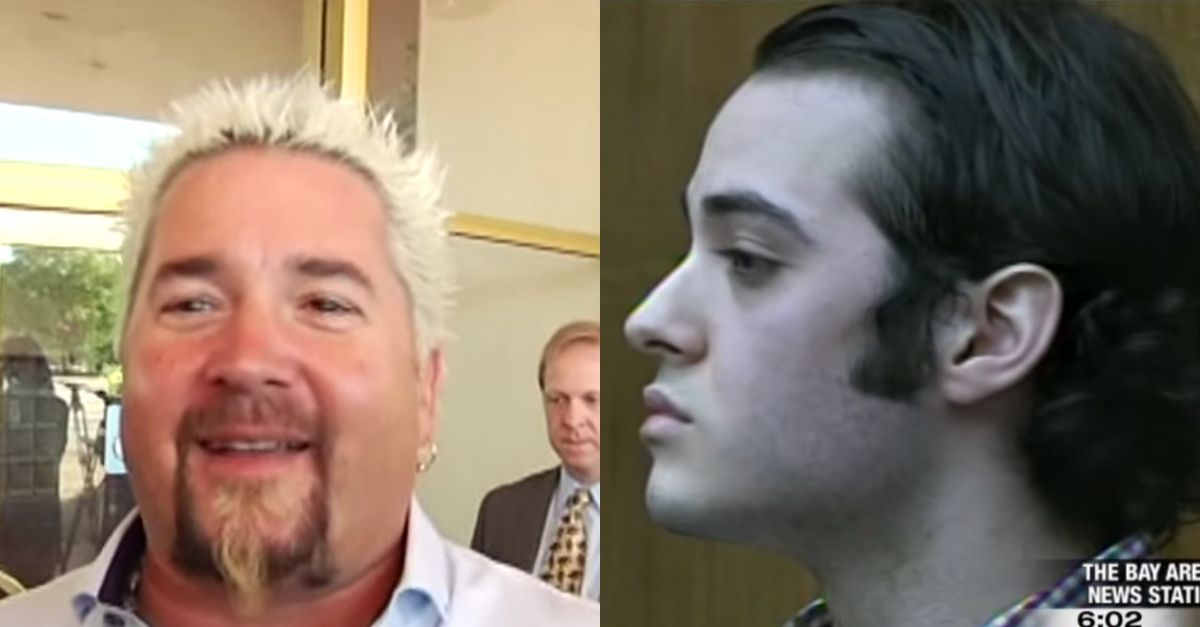 Guy Fieri is a favorite tv personality, chef, game show host… you name it. He lives a pretty loud life, but I mean, why not? Of course, to go along with his staple look with his spiky blonde hair, gold hoop earrings, and slight ducktail beard, it’s no surprise this guy (literally, Guy) owns some flashy sports cars.

However, it hasn’t been all fun and games for the “American restauranteur.” Back in 2011, the famous Food Network star‘s beautiful 2008 banana yellow Lamborghini Gallardo was stolen. The $200,000 sports car was being serviced in Northern California at a San Francisco dealership, when Max Wade, only 16-years-old at the time, used climbing gear to climb down the building in a way only seen in movies like Mission Impossible. He cracked Fieri’s car window, disabled the alarm, and straight up drove it out the front door.

Luckily, the dealership caught the heist on its security cameras, but for some reason, it took quite some time to actually hold this brave kid responsible. And the celebrity chef finally learned of his missing Lambo while filming a Triple D episode in Chicago. The beloved sports car was clearly seen cruising all over the Bay Area, including the Golden Gate Bridge. The plates literally had “GUYTORO” across it, so it wasn’t just anyone’s Lamborghini Gallardo.

The teenager was not even remotely coy about the stolen vehicle, taking enough joy rides to get the attention of some of Fieri’s friends. But even after a year, authorities were still struggling trying to find Wade. Finally, after this troubled teenager got busted for another crime, justice for Fieri’s car was finally served. At 19-years-old, Max Wade was sent to life in prison, and stealing Guy Fieri’s Lamborghini was only a small part of his charges.

Apparently, the kid had shot another guy five times for taking Wade’s high school crush out on a date. While investigating that case, police finally found Fieri’s car in Wade’s storage locker in April 2012. Wade had stolen the car and kept in the storage unit to impress said girl, and clearly, that didn’t work out so well.

Fieri did end up testifying at the trial, but he was clearly over the whole situation. ?I just wanted to keep it straight and to the point, let?s wrap this up,? he explained, ?There are other facets to [this case] that are far more important than my car.?

After the court case, Fieri’s insurance company took possession of his precious Lambo, while Wade was sentenced to life in prison for attempted murder, car theft, and a few other charges. I guess I wouldn’t care too much either after all that chaotic trouble. I get being a teenager means trying to be too cool sometimes, but I don’t know how much fame is worth being “the crazy guy who stole celebrity chef Guy Fieri’s Lamborghini.”