Hackers appear to have breached Twitter accounts belonging to former Fox News hosts Eric Bolling and Greta Van Susteren, and are using that access to the accounts to send messages to President Donald Trump.

Trump only follows 45 accounts on Twitter, two of which are Bolling and Van Susteren. Hackers posted photos of direct messages (DMs) sent to President Trump with messages supporting Turkey and  Turkish President Recep Tayyip Erdogan. They also declared takeovers on both accounts, identifying themselves as the “Turkish cyber army Ayyıldız Tim” and threatening “We got your DM correspondence!” The tweets have since been deleted.

Eric Bolling’s direct messages reveal that he once sent Donald Trump Jr. one of his own tweets and exchanged messages with Scott Pressler, an activism strategist for ACT for America, a group that describes Islam as “barbarity.”

Hackers also posted “The world is bigger than five,” a phrase popularized by Erdogan himself in challenging the authority of the United Nations Security Council, according to New York Magazine. A since-deleted tweet from Susteren adds:

We love the Turks and Muslims in the world. We condemn those who persecute them, especially in the United States, and we share their suffering . We love turkish soldiers , we love Erdoğan, we love Turkey.

Greta Van Sustaren has since deleted tweets posted by hackers to her account, but they are embedded below. Hackers posted screenshots as they sent pro-Turkey messaging to the account belonging to President Donald Trump. 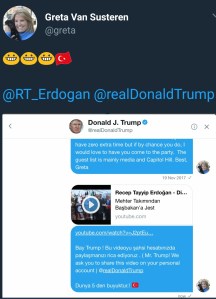 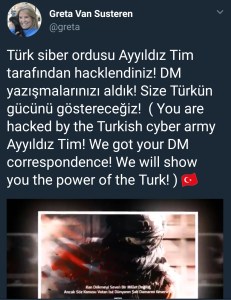