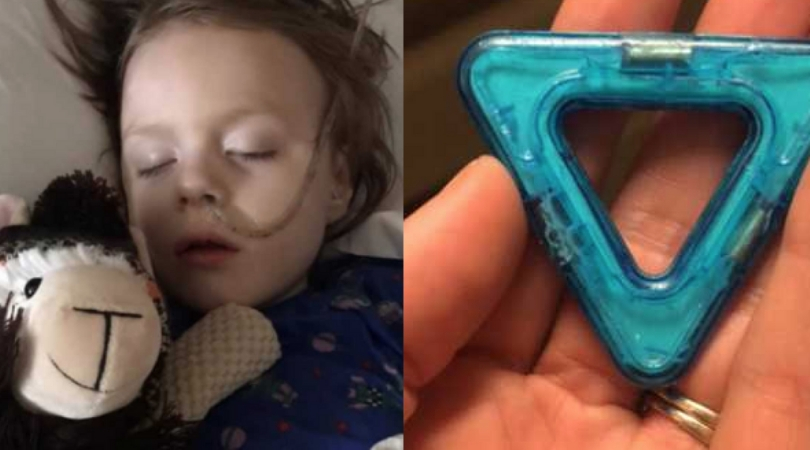 A 4-year-old boy is spending the holidays in the hospital after a Christmas present he received sent him straight into surgery. According to the mother, Jennifer White, the boy had to have part of his colon and intestines removed, after ingesting parts of a popular magnetic toy.

Beck White got sick around Christmas, complaining of sharp abdominal pain. At first, the mother though her son had caught the flu due to his “mild symptoms.” It wasn’t until the boy started to vomit a very dark color liquid, that resembled coffee grounds. His mother immediately knew something was wrong, and both parents rushed the toddler to a local hospital in Appleton before he was sent to Children’s Hospital for surgery.

The x-ray showed Beck has swallowed the small magnets that were inside his toy. Not only did he swallow one, but he managed to swallow 13 of them. The boy snapped them open and ingest them without the parents knowing. The magnets inside had begun to cut holes in his intestines and his digestive system.

Naturally, as all magnets do, they were trying to get to each other through his intestines. They ultimately created holes in the lining, which doctors had to fix to avoid ruining his digestive tract. Beck is autistic, which means his parents are usually careful when buying toys for him. After the incident, the mother stated she will not bring toys with magnets into their home anymore.

Fortunately, Beck is expected to recover but will need to remain in the hospital at least a few more days. The American Academy of Pediatrics warns no high-powered magnets should be in homes with kids. If swallowed, parents should take their children to their closest emergency room as soon as possible and be treated by a medical professional to avoid a situation like this. Speedy recovery, Beck!

Watch: Toys R Us Could File for Bankruptcy This Week