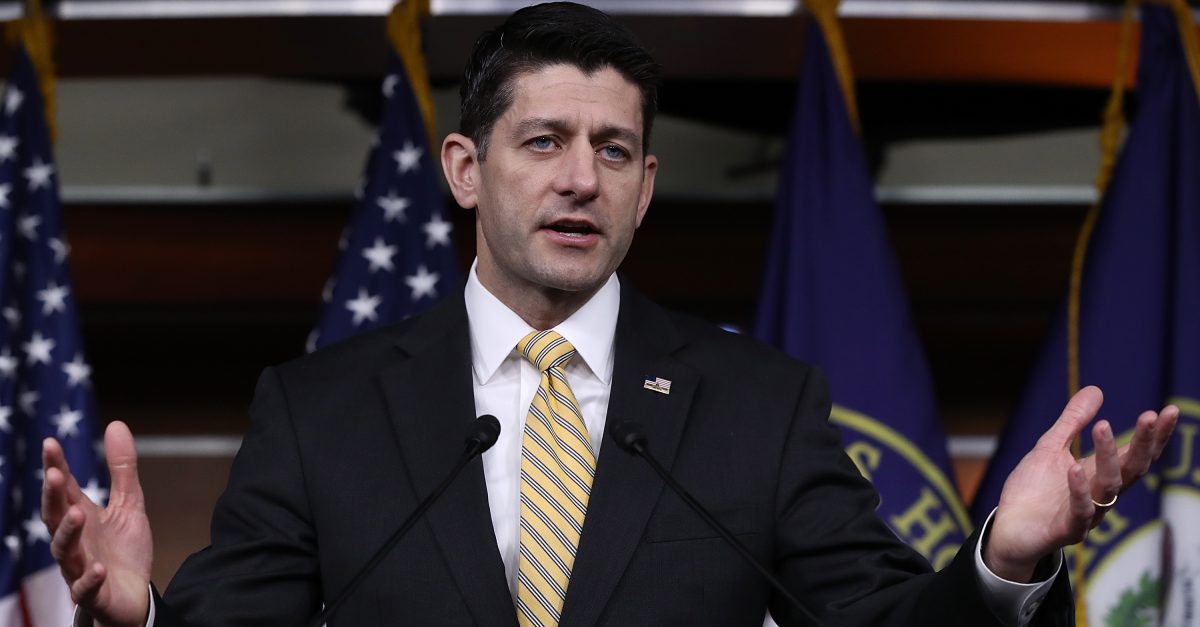 Win McNamee/Getty Images
WASHINGTON, DC - MARCH 02: Speaker of the House Paul Ryan (R-WI) answers questions at the U.S. Capitol during a press conference March 2, 2017 in Washington, DC. Ryan said U.S. Attorny General Jeff Sessions, following reports of Sessions meeting with the Russian ambassador during the U.S. presidential campaign, should recuse himself from any investigation into alleged Russian ties to the Trump campaign if Sessions is a target of that investigation. (Photo by Win McNamee/Getty Images)

The bill is similar to a draft released last month, and maintains the GOP plan to shift costs and responsibility from the federal government to states and individuals. The House GOP says Health Savings Accounts (HSAs) will be “enhanced and expanded” under the plan, but this law only provides for additional tax exemptions that make it more attractive to place money into an HSA.

The American Health Care Act also establishes stiff penalties for allowing healthcare to lapse, such as a premium increase as high as 30% if Americans allow health insurance coverage to lapse. And it allows insurance companies to charge elderly Americans premiums that are as much as five times more expensive than the premiums they charge young people. The Affordable Care Act only allowed companies to charge older Americans three times as much.

Under the American Health Care Act, block grants of $10 billion every year over 10 years will be disbursed to the states to be used in several ways, notably the creation of high-risk pools and attracting insurers to join them. The funds can also be used to attract younger, healthier people to state-run exchanges as needed. The individual and employer mandates that Republicans loved to hate are gone, along with the numerous taxes that helped fund the Affordable Care Act. Age-based income tax credits remain, even though conservative Republicans have called them an entitlement program.

RELATED: Here?s the draft of the Obamacare repeal and what it could mean for your healthcare

In a revision, however, the tax credits have income-based ceilings that will start to apply to individuals making over $75,000 and households making over $150,000. Americans making more than that will see a gradual phasing out of tax credits up to $215,000 per year, at which point no age-based tax credit is available.

Curiously, the act has no language that provides for Americans to buy health insurance across state lines.

The Medicaid expansion, popular with states on both sides of the aisle, would see enrollment frozen in 2020. The American Health Care Act also places a limit on total federal funding for Medicaid. However, states are permitted to enroll residents in expanded Medicaid through 2019, and they will continue to receive some federal funding (though less of it than they currently receive) after 2020.

The unpopular proposal to tax the most generous healthcare plans as income ? called the “Cadillac Tax” ? remains. The bill also ends all federal funding for Planned Parenthood, though the use of federal funds for abortion has been prohibited by the Hyde Amendment for over 30 years.

RELATED: Rand Paul accuses Republicans of sneaking around to push ?Obamacare-lite? in secret