Here’s the footage of joint U.S. and South Korean aerial drills that has Kim Jong-un fuming 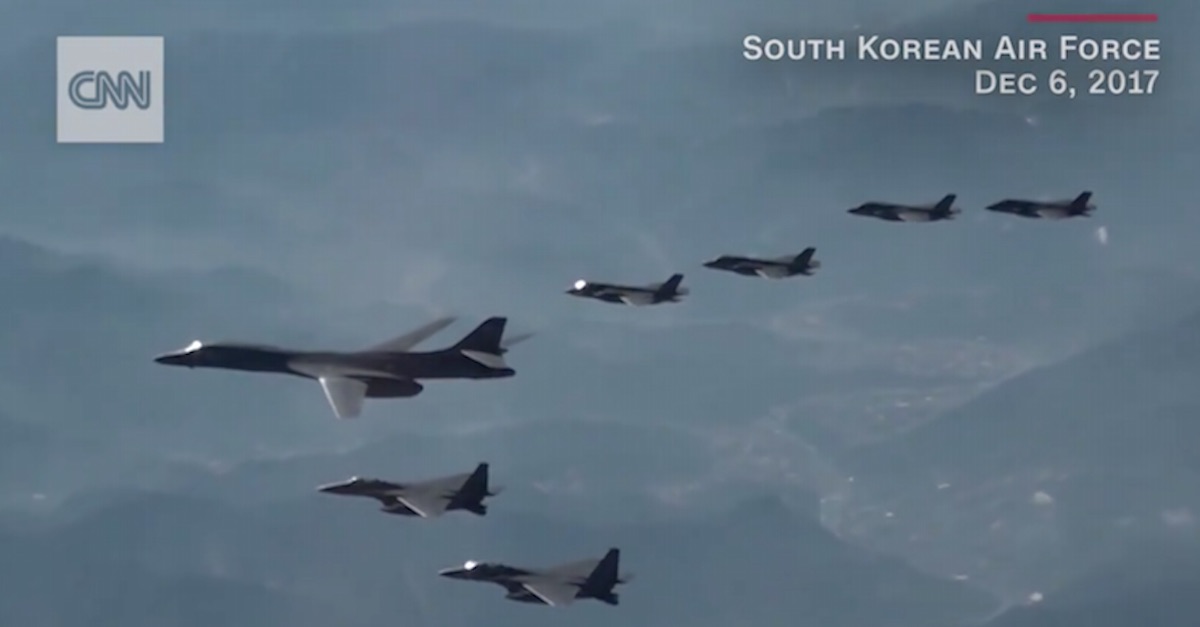 North Korea issued threats in advance of a planned aerial drill on Dec. 4 involving U.S. and South Korean forces in the region, but America and its ally have responded by going right on ahead with it.

Our first look at the video of the fighter jets in formation shows F-22 fighter flying during aerial combat exercises.

North Korea threatened Sunday that if the United States continues to conduct joint military operations with South Korea “nuclear war [may break out] at any moment,” Sky News reported.

Kim Jong Un tours a potato powder factor in Samjiyon, in the far-east of the country, with officials – he was there this time last year too pic.twitter.com/TWz09NnByr

The statement is available to view in full on the helpful website KCNA Watch, which prints in English the articles run by the state-run agency KCNA.

Quoting an unnamed spokesman from the Committee for the Peaceful Reunification of the Country of the Democratic People’s Republic of Korea (CPRC and DPRK, respectively), KCNA referred to the U.S. and South Korean military might as “puppet forces” and warned that a planned Dec. 4. aerial drill is a “war rehearsal [that] is just a grave military provocation.”

North Korea said that further escalation through joint drills “will only invite more terrible retaliation and precipitate their self-destruction.”

President Trump responded last Tuesday to North Korea’s latest ICBM launch, a launch that Defense Secretary James Mattis also said flew “higher […] than any previous shot they?ve taken.” The president then announced the Wednesday after that he had already spoken to China’s President Xi Jinping and that “major sanctions” would be imposed on North Korea.

The New York Post quoted physicist David Wright, who estimated that the missile could have traveled 8,100 miles and would have “more than enough range to reach Washington, D.C., and in fact any part of the continental United States.”

RELATED: The dramatic rescue of a former North Korean soldier who defected

However, the U.S. Department of Defense said the missile could not threaten the U.S., its territories or its allies.