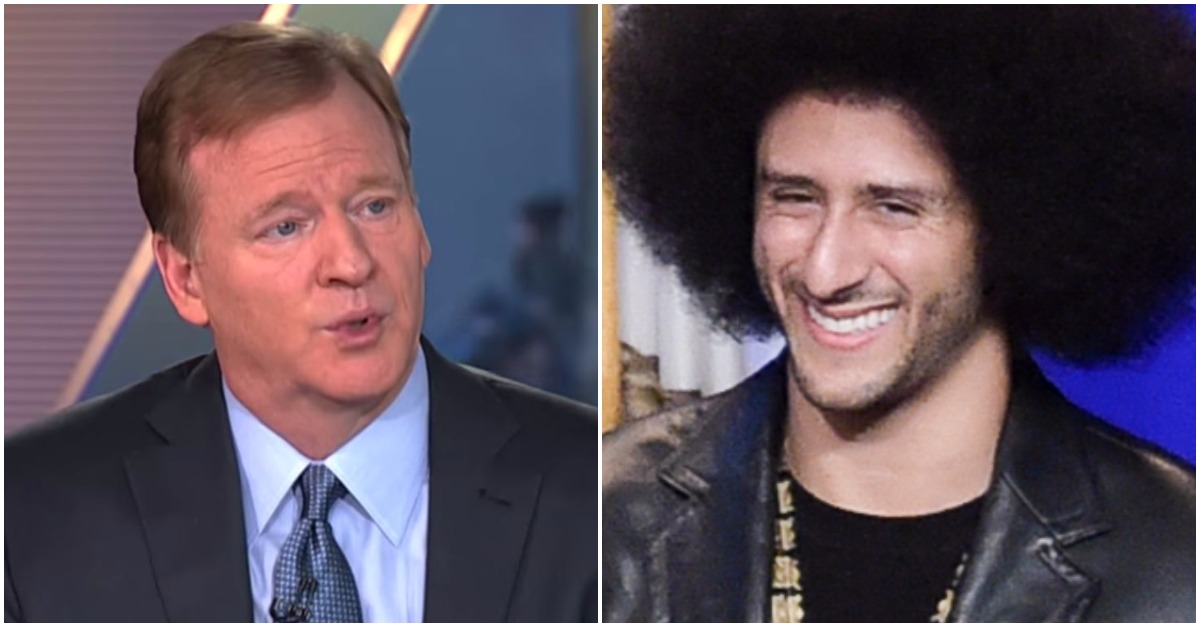 Colin Kaepernick still hasn’t found himself on a roster, but NFL commissioner Roger Goodell says it’s untrue that Kaepernick is “blackballed” from the league.

In a Monday interview with CNBC’s “Squawk Box,” Goodell was hit with questions about players dipping their toes into the political pool and the backlash that their statements have had on the profitability and image of the NFL — of course, Kaepernick’s name came up. Goodell claimed that “[the NFL] has always welcomed Colin to come over and meet at any point in time.” At one point, the host asked point-blank “do you think he should be playing?” but Goodell was able to dodge the question, answering “every club has got to make those decisions, they make those decisions based on a lot of factors that are best for their football team.” Goodell added that he “doesn’t agree” that Kaepernick is being blackballed.

When asked about dropping attendance, the commissioner admitted that attendance is “off about one percent” but pointed to the fact that two teams recently switched cities as part of the reason for empty seats.

Later, Goodell explained “we respect our players and we’ve had an incredible amount of dialogue [about players kneeling during the anthem] and what we’ve tried to do is create a new platform … that is going to give them an opportunity for them to highlight their important work in the community in order to make the communities better.” He also seemed to hint that there is no plan to make a rule demanding that athletes stand during the anthem.

Kaepernick’s struggle to find a team has led to a lot of speculation with pockets of fans clamoring for him, but no program willing to bring him on board. On Sunday, the Philadelphia Eagles lost their star quarterback Carson Wentz to a torn ACL and immediately, Kaepernick’s name was being tossed around, with NJ.com running a piece claiming that “Kaepernick is among [the Eagles] eight best options.” With an 11-2 season record, the birds have already clinched the NFC East but loyal fans were hoping for a Lombardi trophy and counting on Wentz to lead the way to the team’s first Super Bowl victory.

'I accept this award not for myself, but on behalf of the people'
Colin Kaepernick accepts the 2017 Muhammad Ali Legacy Award pic.twitter.com/7eGMRxE367

For a quarterback of Kaepernick’s quality to be unsigned this late into the season is more than unusual, it’s unheard of. FiveThirtyEight ran the numbers on the 30-year-old football player’s stats and found that the only other QB of his caliber in the modern era to go unsigned for nearly as long was Michael Vick in 2015, after he was released from the Eagles.

Goodell himself is no fan favorite, as even “The Weekly Standard,” a conservative political magazine that boasts a loyal following among beltway Republicans, ran an op-ed on Tuesday declaring “Roger Goodell is not the man his father was” and pointing to his recent $200 million contract as proof that he’s in it for the money.