Menu
Follow us
Search
Menu
Search
In this Saturday, Aug. 12, 2017 photo, DeAndre Harris, bottom is assaulted in a parking garage beside the Charlottesville police station after a white nationalist rally was disbursed by police, in Charlottesville, Va. (Zach D. Roberts via AP)

A counter-protester who was beaten by a group of protesters at a white nationalist rally in Charlottesville, Va., now has a warrant out for his arrest.

A picture and video of DeAndre Harris, 20, being attacked by a group at a the August rally quickly went viral. The attack left Harris bloodied, with a fractured wrist, a knee injury, abrasions and a cut on his head that required staples.

Earlier in a parking garage in #Charlottesville – white supremacists beat this black kid w/poles. [Photo for by @zdroberts @NationofChange] pic.twitter.com/LLPBPjb8si

Fight broke out. Nazis beat black kid w/sticks at end. I kick one in back 2 help & he runs after me. Kid is safe but bloody #Charlottesville pic.twitter.com/kr11a8zQ0K

On Monday, a warrant was issued for Harris’ arrest on behalf of self-described “Southern Nationalist” Harold Ray Crews. Crews obtained a warrant from a local magistrate on a felony charge of unlawful wounding after accusing Harris of striking him with a pipe during the Charlottesville rally. Harris’ lawyer, S. Lee Merritt, agrees that Crews was attacked with a pipe but argues Harris wasn’t the attacker. Merritt notes that a picture of Crews being hit in the head with a weapon shows the hand of a white counter-protester — Harris is black. Merritt also denounced another video that allegedly shows Harris hitting Crews with a pipe.

“The incident that DeAndre was involved in, showed [Crews] as the aggressor, driving his pole into [counter-protester] Corey Long, the sharp end of his flag pole. DeAndre responded to that defensively, which is an affirmative defense to the charges filed against him,” Merritt told The Root.

Merritt called the charges against Harris “clearly retaliatory.” In the Washington Post, he stated, “We find it highly offensive and upsetting, but what’s more jarring is that he’s been charged with the same crime as the men who attacked him.”

Detective Sgt. Jake Via of the Charlottesville Police Department said the department was “not expecting” the warrant and had planned to do its own investigation into Crews’ claims when they learned of the warrant.

Two men were already charged with malicious wounding in the attack carried out against Harris.

RELATED: Las Vegas gunman’s first victim was shot in the hotel, not at the festival, say police 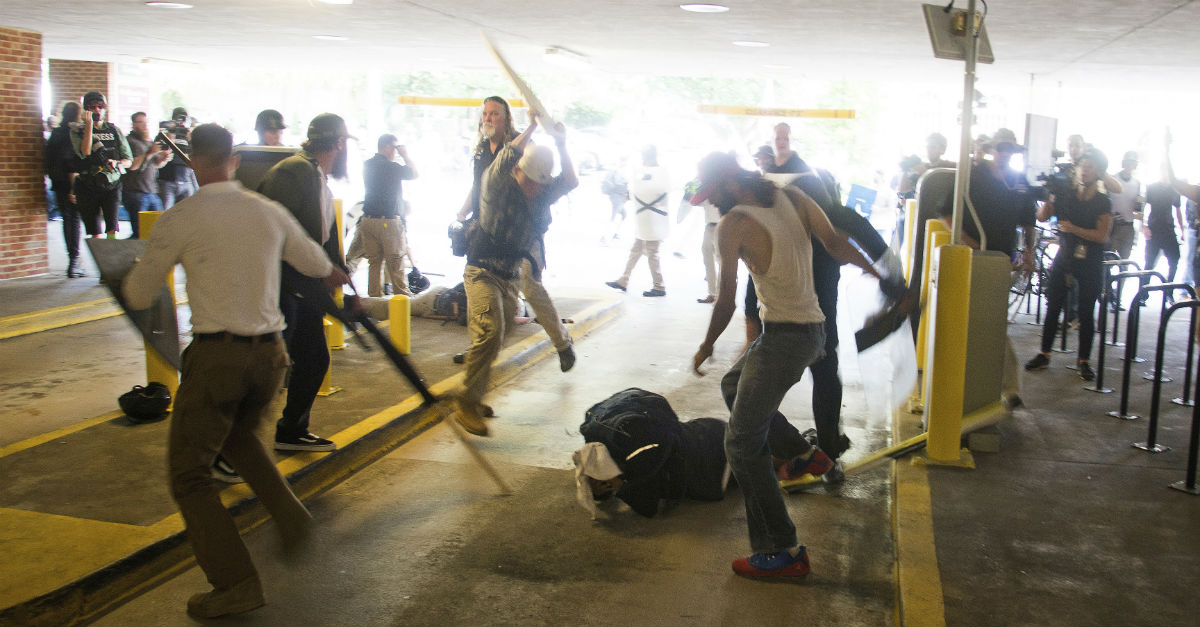