Remembering the Aberfan Disaster, One of the United Kingdom’s Darkest Hours 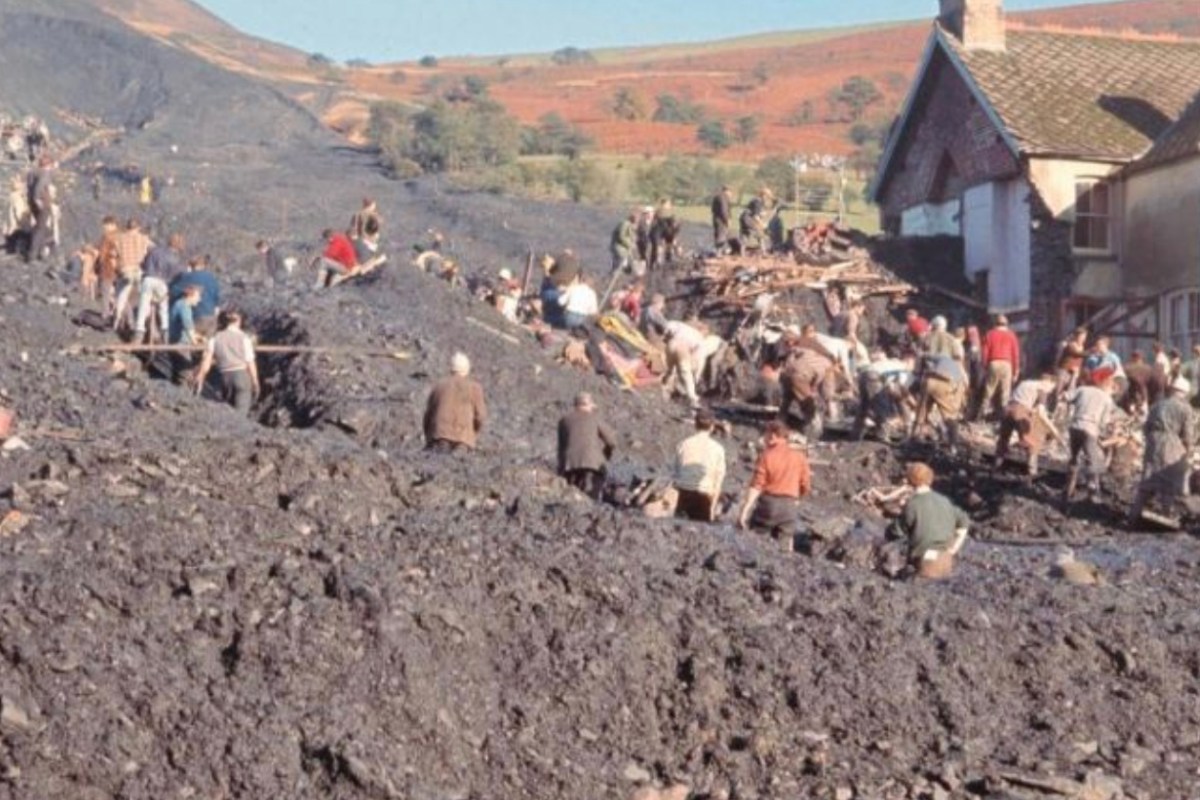 If you have been keeping up with [i.e. binging] Netflix‘s The Crown you saw the Aberfan disaster episode. If you already love this show, be prepared to love it more. As most shows fictionalize historical events, this one did it justice.

Aberfan was a real mining town and the events depicted took place over fifty years ago in a Welsh village. The event, known as the Aberfan disaster, is considered one of the biggest disasters in the history of the United Kingdom. The worst part is that it was entirely preventable, had the National Coal Board been a little more proactive.

The village of Aberfan, located in South Wales, near the edge of the Merthyr Vale coal mine, had been experiencing heavy rain. Making the slick spoil tip, a pile of 300,000 cubic yards of coal waste material piled over 111 feet high over a slope above the town. But, the spoil tip had been there for years and the mining village had done everything it could to alert the National Coal Board, who was in charge of the Merthyr Vale Colliery mine, to the issue. The National Coal Board’s response was if the town of Aberfan continued to complain and “make a fuss.. the mine would close.” So, the town quieted, given that coal mining was the way that a majority of the men in town supported their families. Also, because oil was quickly outpacing coal, they feared unemployment more than a potential disaster. But, they shouldn’t have.

21 OCT: Memorial events are being held today to mark exactly 50 years since the Aberfan disaster, which saw a mountain of coal waste collapse and bury a school and nearby houses in the Welsh mining village. 116 children and 28 adults were killed. The loss of life made headlines around the world and led to a long fight for justice from the relatives of those killed. More here: bbc.in/aberfan Still images: Press Association #aberfan #aberfandisaster #wales #uk #anniversary #bbcshorts #bbcnews #bbcwales @bbcnews ​

On the morning of October 21, life was continuing normally. Mothers walked their young ones to school, older children chatted excitedly about the half-term holiday that began later that day. Police officers, miners, and the rest of the Aberfan townspeople went about their jobs.

At 7:30 a.m., the coal tip started sliding. The coal miners working at the site decided that the day’s work should be saved for another day, given the spring water that the pile was on top of was turning the coal waste into quicksand. At 9:15 am., at over 80 miles per hour, the pile began sliding down the hill heading straight towards the Pantglas Junior School, which was sitting right below it. The school, filled with school children was buried in coal waste and the debris of the sludge. A total of 144 lives were lost; 116 of them were children under the age of twelve.

The town immediately went to work trying to dig out the children. Teachers sacrificed their lives protecting the children from the debris. One teacher died holding five of his students. At 11 a.m., Jeff Edwards was the last child to be pulled out alive. But, the town continued to dig, unaware.

The Bethania Chapel was turned into a makeshift mortuary. Bodies were laid on the pews and in the walkway. Two families at a time were allowed to enter the chapel and walk through to lift the sheets of over a hundred bodies to find and claim their children. The process took days. Prince Philip came down the next day, but Queen Elizabeth II did not come down until a week later. The town was mostly on their own in their time of need. When a disaster fund was created and donated to the people of Aberfan, they found themselves fighting over who would be able to take money to bury their kids. It seemed the frustration of the situation would never end.

In 1966 the Aberfan disaster took the lives of 116 children and 28 adults. Privileged and humbled to walk amongst them this morning . ❤ ❤ ❤ #aberfan #aberfandisaster #aberfancemetery

The survivors of the Welsh mining village disaster grieved heavily. Couples lost their children, children lost classmates, friends, and their childhood. Many survivors showed symptoms of Post-Traumatic Stress Disorder. One survivor stated that even as an adult, hearing the voices of children transports him back to that dreadful day.

The NCB was found to be at fault of the Aberfan disaster, due to their “bungling ineptitude“. The NCB ended up paying £500 to each family who lost someone in the event. It didn’t make things better, but it was literally the very least they could do. Additionally, the NCB refused to remove the rest of the coal waste tips from the town. Locals dumped coal waste in the Welsh Office before the government finally decided to do it. They took the money to do it from the disaster fund. The town never fully recovered. At least, thanks to The Crown, these people’s stories can be remembered.

Watch: Lone Star Ticks Can Make You Allergic to Red Meat and Are Spreading