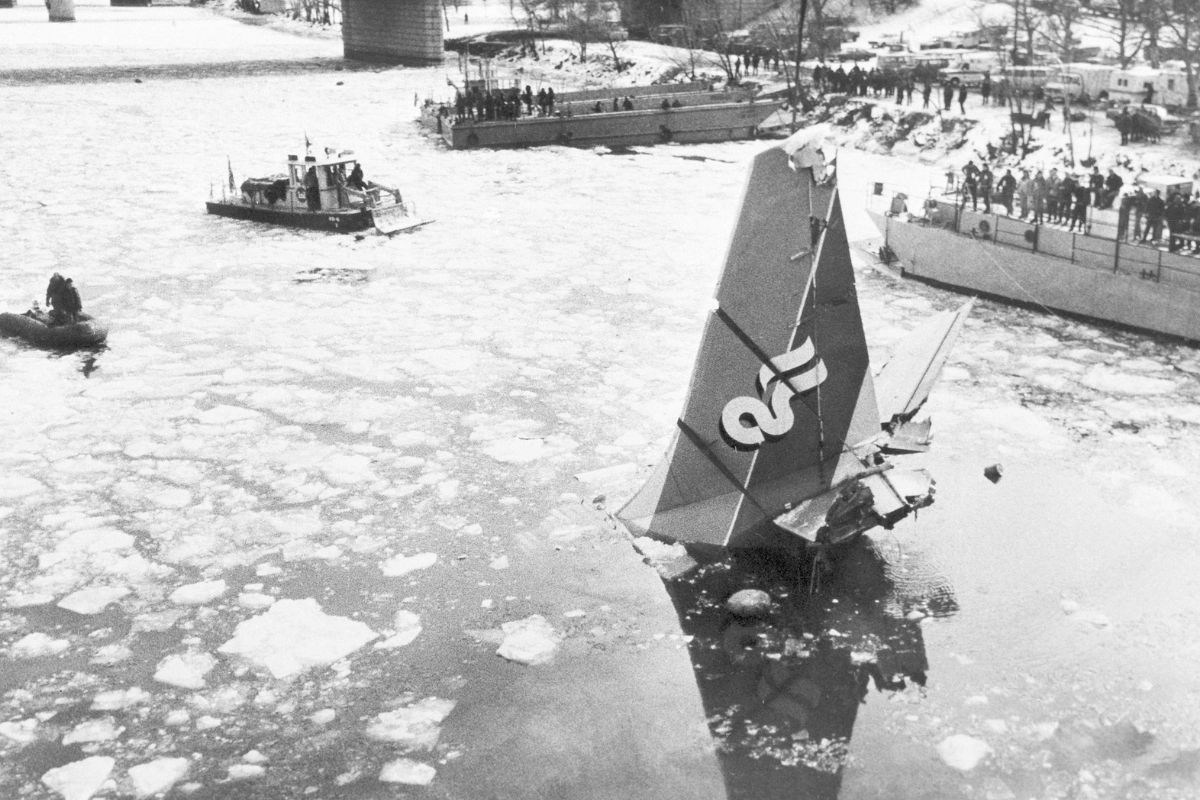 When Chester Panzer, of Washington D.C.’s WRC-TV, was stuck in gridlocked rush hour traffic in 1982 he didn’t expect his life would change forever. But Panzer and his team would become responsible for the images of Air Florida Flight 90 that gripped the nation and told a tragic tale of foolish error, heroism, and the human cost of both.

The Crash of Air Florida Flight 90

Air Florida Flight 90 took off from Washington National Airport, now Ronald Reagan Washington Airport, in Washington D.C. on January 13, 1982. The Boeing 737-222 was set for Fort Lauderdale, Florida, and packed with 74 passengers and 5 crew members, ready to escape the blizzarding Virginia atmosphere. In fact, Flight 90’s takeoff was continuously delayed due to 6.5 inches of snow and problems de-icing the plane. American Airlines, in contract with Air Florida, was tasked with the de-icing and did not comply with industry standards when working on Flight 90. Using an inaccurate mixture and a modified nozzle, ice was visible on the wings before Flight 90 was even off the ground. But not wanting to delay the flight any further — the plane had been taxiing for nearly an hour — Captain Larry Wheaton plowed ahead. Wheaton even had trouble gaining traction on the ground out the gate, and he attempted to power back, using a reverse thrust of the engines which also proved futile. (Boeing strictly warns against this method.) Chains were eventually used to make way across the snowy ground, and Flight 90 took off. Its journey lasted 30 seconds.

Captain Larry Wheaton had only made eight take-offs in winter conditions. His first officer Roger Pettit had flown in snowfall just twice. Both employees of Air Florida have been described as diligent, although Wheaton’s imperfect record reflected one suspension and a failed exam. Combined, Wheaton and Pettit did not have the expertise necessary for an icy takeoff. Their ignorance was the cause of the crash, and and 79 people paid the price. (The NTSB report would later confirm this.) Believing that warmth from the engines would melt the snow built up on the 737’s wings, the flight crew never activated the plane’s anti-ice system during ground operations. Air Florida Flight 90 reached a max altitude of 352 feet before crashing into the 14th Street Bridge across the Potomac River, less than a mile from the edge of the runway. On its way down into the freezing waters of the Potomac, the crashing plane hit seven vehicles on the bridge. 74 people on board Flight 90 perished, along with four motorist fatalities on the road.

Aftermath of the Air Florida Flight 90 Crash and Its Coverage

Chester Panzer and his camera crew were stuck on George Washington Parkway when the Boeing 737 crashed into the 14th Street Bridge — just a few hundred yards away. Within minutes later, they were shooting detailed footage of the scene, including the mission of brave first responders.
The Coast Guard and police helicopters rushed to the scene and began working desperately at the water’s surface. Several Flight 90 passengers were still alive, struggling to swim and maintain body heat amongst the wreckage in the Potomac. Panzer was a Pulitzer Prize finalist for his snapshot of Lenny Skutnik’s valiant dive that pulled Priscilla Tirado out from the deadly icy waters. Alongside Skutnik, a civilian named Roger Olian also assisted. See below, Tirado hanging on a lifesaver. However, the most famous Flight 90 image remains the tail of the plane (pictured above), which stuck up from the water like an iceberg and in one frame told the story of a flight gone straight down.

In the end, there were five survivors aboard Air Florida Flight 90: flight attendant Kelly Duncan, Patricia “Nikki” Felch, Joe Stiley, and Priscilla Tirado. But there was a sixth survivor too, who has gone down in history as a hero. Arland Williams Jr, a 46-year-old bank examiner, survived the initial crash but drowned during a rescue in the Potomac. Despite being offered the helicopter rope multiple times, Williams continuously passed it off to his fellow survivors. Among them, Duncan, the flight attendant was pulled to shore by Williams’ discarded rope. The radically altruistic act cost Williams his life but earned him an eternity of honor. In 1985, the 14th Street Bridge was renamed The Arland D. Williams Jr. Memorial Bridge. But as this beautiful, sad story in The Guardian illustrates, there were more survivors too, who loved the victims of this preventable tragedy and had no choice but to continue on with their lives.