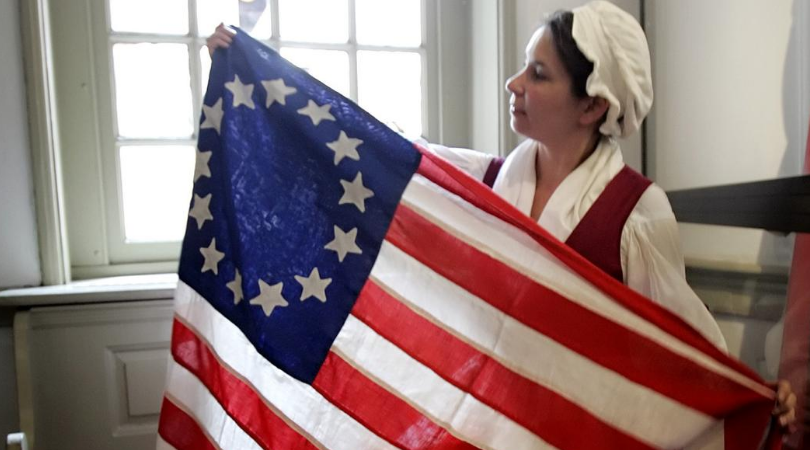 The earliest design of the American flag is credited to Betsy Ross in 1776. That recognition, however, did not come during her lifetime. It wasn’t until 1870 when her grandson William Canby started speaking out about his grandmother’s work and argued she should be honored for it.

The way William Canby, recalling the words of his grandmother, remembers it, in the Summer if 1776 Betsy Ross, who worked as a seamstress, was visited by three high profile men: Colonel George Ross, George Washington, and Robert Morris. What made them approach her? She was a local Philadelphia seamstress and upholsterer. She’d created uniforms, tents and was often a flag maker for the United States continental forces.

She was presented with a proposition for her to create the new nation’s flag. She was given a sketch of a 13-star flag representing the thirteen original colonies. The proposed first American flag also consisted of white stripes and 13 six-pointed stars. She agreed to take on the project but suggested a few changes to the flag design. Ross suggested that the stars have five points versus six and that they should be arranged in a circular formation.

The flag was created by the following summer. Congress adopted the Stars and Stripes as the first flag of the United States. It’s alternatively known as the Betsy Ross Flag. By 1873, with documentation from Ross’ family members, Canby’s recollection was made public in Harper’s New Monthly Magazine. By then the information was being taught by all intermediate, elementary, and high schools alike.

However, amongst U.S. History scholars and various organizations who study historical flags, some want to dispute Betsy Ross’s accreditation because there was no “official” documentation from Washington or the like. But with the following information, they “assume” she “likely” could have been the creator considering the meeting she took, including with a relative, Colonel George Ross, her late husband’s uncle. Supposedly he suggested her for the job and is the link between her and Washington. However, Geroge Washington and Betsy Ross apparently attended the same church. And lastly, Ross was a flag maker and had worked with the army before. Thus with this logic, historians say it’s safe to assume she created the flag. There was a claim for payment from a Francis Hopkinson from New Jersey, who was allegedly consulted — but only consulted. So, as far as I am concerned, Betsy Ross made the damn thing. Thanks, Bets!