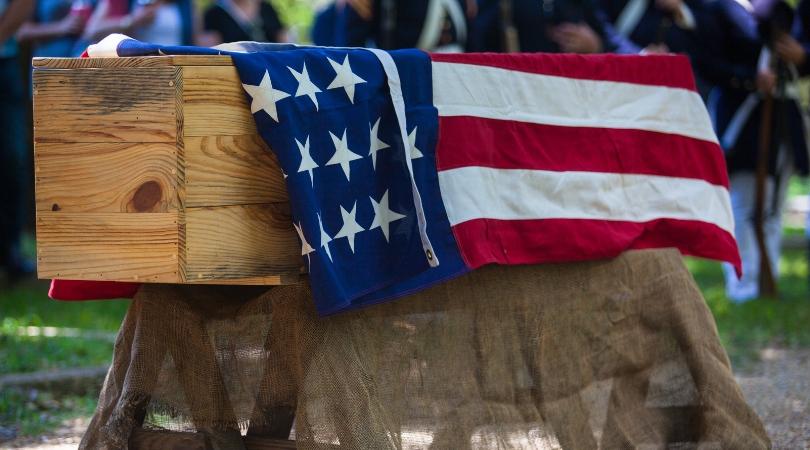 There is no way to properly thank those who have served and lost their lives in the line of battle defending the United States in the armed forces. The most we can do is honor them in death. This is the meaning of the flag-draped coffin at a military funeral. This action honors Military Veterans who served the United States.

There are a couple of different ways that the military will drape a united states flag on the casket of a deceased serviceman or servicewoman. This includes Closed Casket, Half Couch (open), and Full Couch (open). The standard protocol is the blue field is placed at the head and over the left shoulder.

Regardless of the branch, whether it be U.S. Air Force, U.S. Army, U.S. Marine Corps, U.S. Navy or U.S. Coast guard, the same message is stated. It states, “On behalf of the President of the United States, the United States Air Force, and a grateful nation, please accept this flag as a symbol of our appreciation for your loved one’s honorable and faithful service.”

Following this, Taps is played by a bugler and the US flag is folded thirteen times on the triangles. Once folded, it resembles the tri-cornered hats worn by the Patriots during the American Revolution. Here are the meanings of each individual fold, according to the National guard Associations, Mississippi.

The Folds of the Flag

Be courteous to everyone you have the chance to encounter, because sometimes people have done more for us than we realize. #military #america #airforce #flagfold #bugle #taps #redwhiteandblue #symbolic #starsandstrips #americanflag #afternoon #nellis #vegas #grateful #peoplewewillnevermeet #courteous #salute #duty #honor #honorguard

This flag is then presented to the deceased veteran’s next of kin. This can be a spouse, sons or daughters in biological age order, oldest parent, blood or adoptive relative granted legal custody, brothers or sisters in biological age, oldest grandparent, other relatives, or a close friend/associate. This folded flag becomes a keepsake and reminder that the United States is honoring their loved one.

This article was originally published on November 10, 2019.