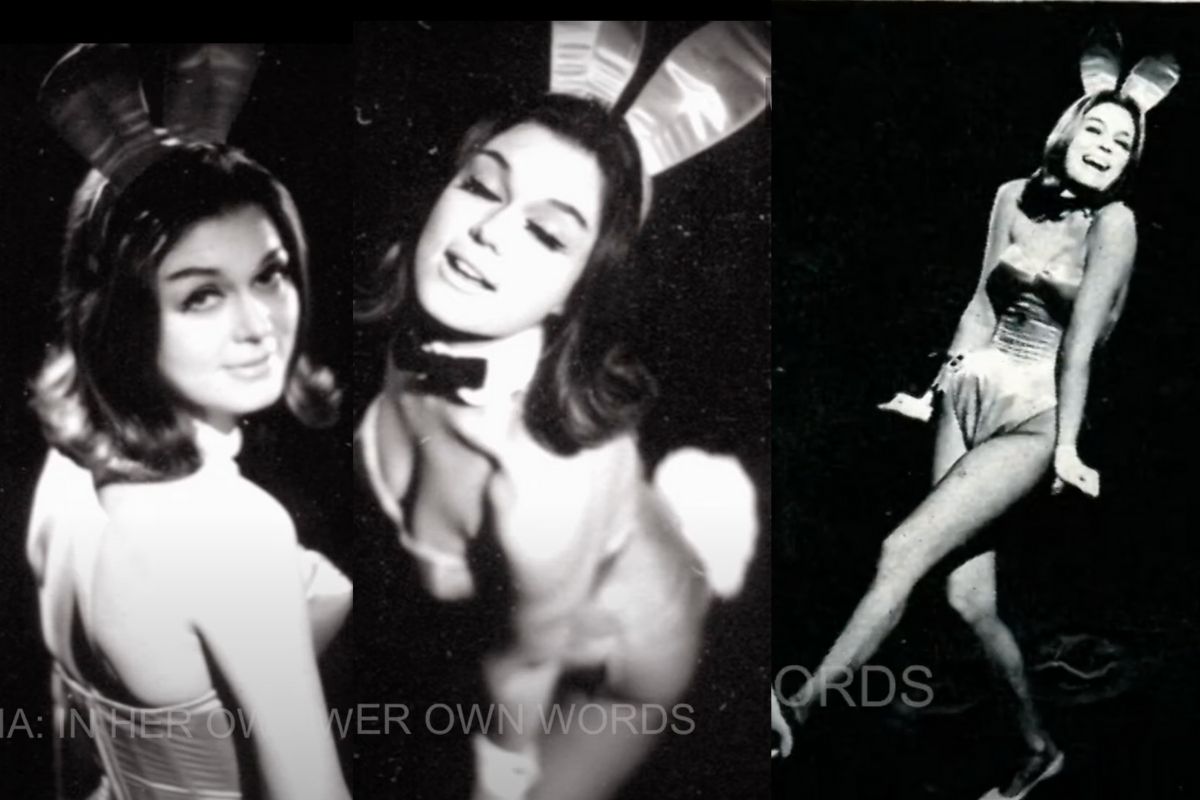 In honor of Women’s History Month, let’s take a moment to remember when Gloria Steinem went undercover as a cocktail waitress at the New York Playboy Club. Donning a corseted bunny costume, the young feminist icon completed rigorous bunny training to eventually pen “A Bunny’s Tale”: a searing industry expose which posited that a sexual revolution solely on men’s terms was a failure. The larger-than-life story is also, in my opinion, the best-ever episode of Drunk History.

Working at The Playboy Club

Before Gloria Steinem became a columnist at New York Magazine and a co-founder of Ms. magazine, she was a plucky 28-year-old journalist working at Huntington Hartford’s Show magazine. In 1963, her editor suggested that Steinem go undercover as a Playboy Bunny at the New York City’s Playboy Club for an investigative piece. Steinem, who’d already published a serious, studied piece on contraception in Esquire magazine, was reluctant. But she eventually agreed to the risqué proposition, hoping to expose the sexist corruption within Hugh Hefner’s Playboy Enterprises.

Steinem responded to an ad from the Manhattan club searching for attractive young girls, aged 21 to 24, for a waitress position. Steinem adopted an entirely new identity for the role, Marie Catherine Ochs, and lied about her age. “Bunny Marie” was then subjected to a humiliating and grueling training process that included studying the “Bunny Bible,” receiving an invasive internal physical, and getting fitted for a torso so tight that “The boning in the waist would have made Scarlett O?Hara blanch.” Like the models and Playmates in Playboy magazine and at the Playboy Mansion, those waitressing at the Playboy Club all wore the tight corsets, in addition to regulation three-inch heels, false eyelashes, and, as Steinem unveiled to the world: they also stuffed their bras with gym socks.

Of course, it’s not necessarily shocking to hear that the bunny costumes were uncomfortable. But other aspects of Playboy’s working environment came off as especially egregious in Steinem’s article. Upon accepting the job, bunnies were promised $200 to $300 a week… then were paid $50, which was New York’s minimum wage at the time. They also received none of their non-cash tips and were personally responsible for the “upkeep” of costumes. That alone cost $2.50 per day, plus $5 for every new pair of nylons. Bunnies were also charged for the mistakes they made at work, called “demerits.” One of the most common demerits? Forgetting to smile, even momentarily.

Then there was also the fact that the New York Playboy Club was essentially operating as a high-end prostitution ring. Though Bunnies were told, foremost, not to touch any customers (many of whom were undercover detectives), they were encouraged — and expected — to accept ?dates? with Number One Keyholders. Only these highest-paying members of the Playboy Club could privately rendezvous with curvaceous employees, an allowance completely at odds with the rest of the strict, illusionary atmosphere.

Gloria Steinem’s “A Bunny’s Tale” was published as a two-part expose in the May and June issues of Show magazine in 1963, accompanied by this juicy teaser:

Beyond recounting her dark experiences as a Playboy Club bunny, Steinem used her unique insider position to make points directly at odds with Hugh Hefner’s popular monthly essay series, “Emancipation Proclamation of the Sexual Revolution.” Steinem highlighted how the theater of the club created a false sense of sexual freedom. Playboy members who were not “Number One” came full of bravado, hungry for an image, and left as horny catcallers. Meanwhile, the women at the center of this commercial exchange, the bunnies, were forced to convey a continuous sense of happiness while enduring serious, unwanted harassment. Not to mention the false dimensions of the exaggerated costumes… in all, the charade was a miserable one that thrived on misogyny left no real place for female enjoyment within the newly charged “sexual revolution” that Mr. Hefner so proudly pushed.

The Show article was a hit and even led to internal, professional changes at the club. Since Steinem’s undercover reporting has gone down in journalistic history. Though she struggled to secure work for a few years following the sensationalized story, as you know, Steinem turned out okay. She went on to become, arguably, the leading voice of second-wave feminism and her legacy still inspires women today. In the past year alone, the Hulu series Mrs. America and the Julianne Moore film The Glorias have both approached Steinem’s life’s work through a newly theatrical lens.

You can read the original Steinem piece in full here and here. It’s since been republished under the title “I Was a Playboy Bunny” in Steinem’s essay collection, Outrageous Acts and Everyday Rebellions.