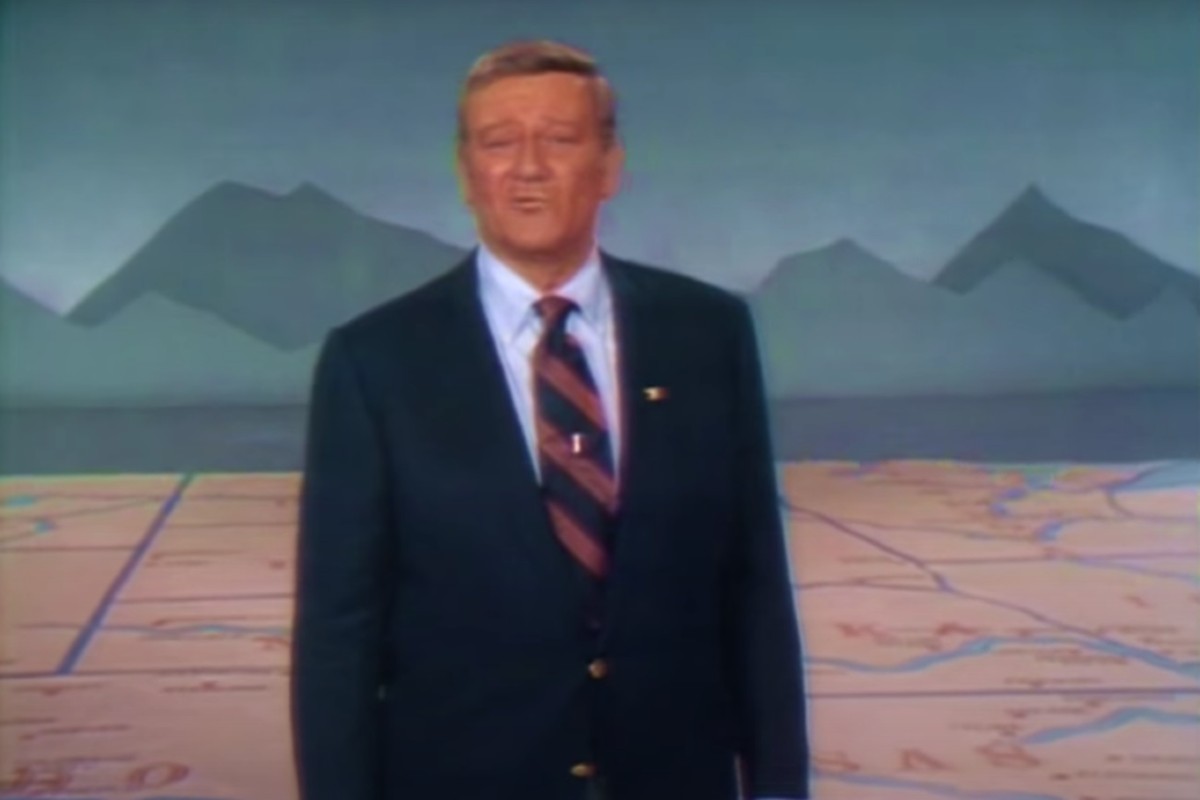 Few actors are associated with the frontier spirit of America like John Wayne. So when NBC produced the 1970 TV special “Swing Out, Sweet Land” about the birth of the nation and its westward expansion, it made sense that the classic Western actor should close out the show, leading a stirring rendition of “God Bless America.”

Swing Out, Sweet Land was a variety show that sought to tell the story of the United States of America through jokes, skits, and songs. John Wayne hosted and narrated the one-off TV show, joined by a star-studded cast of famous friends from Hollywood.

Some of the era’s biggest entertainers appeared in the special, playing either famous American figures or minor characters at pivotal moments in American history. Lucille Ball, for example, voiced the Statue of Liberty, while William Shatner played John Adams to Hugh O’Brien’s Thomas Jefferson. Jack Benny played a man asking Lorne Greene’s George Washington about the mythical silver dollar he threw across the Potomac.

Meanwhile, famous TV and radio entertainer Red Skelton, played a newspaper printer, celebrating the First Amendment with his assistant Tom Smothers. Other notable figures joined the cast, like Dean Martin as Eli Whitney, Bing Crosby as Mark Twain, and Michael Landon as Peter Minuit. Dennis Weaver was Tom Lincoln, while Dan Blocker played the Native American man that sold Manhattan. Oh — and who could forget Phyllis Diller, who blew everyone’s minds by playing a woman who ran for president. (The idea!)

In other skits, entertainers played themselves, sometimes dropped into the past —Bob Hope and  Ann-Margret entertained the troops at Valley Forge, for instance. Musicians Johnny Cash, Roy Clark, and Glen Campbell all performed songs as themselves, as did Leslie Uggams.

It is the closing scene, however, that remains strongest in most viewers’ memory. John Wayne’s tribute to America, full of humor and heart, ended with a rousing version of “God Bless America” with each cast member singing along.

Wayne introduced the song with a rousing speech, urging on Americans to wake up each day remembering, “This is my country and I’m gonna’ do good for it!”

“It just might work,” Wayne said, adding, “we’ll never know unless we give it a fair try.”  He then concluded with the phrase that he says every day, “God bless America!”

After the legendary TV special, Wayne would go on to sing America’s praises in a book of poems: “America, Why I Love Her”. Here’s a quick excerpt:

“You ask me why I love her?… I’ve a million reasons why.

Watch: How Many Kids Did John Wayne Have?