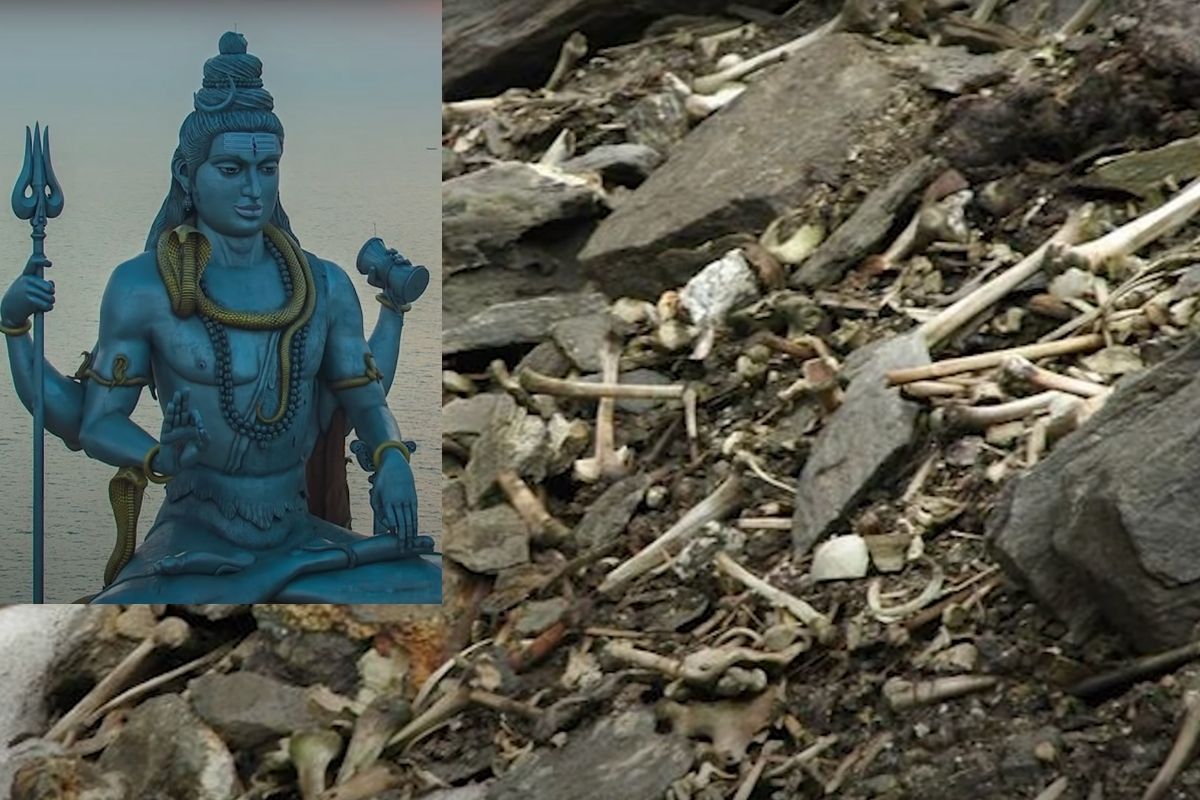 Atop of India’s second-highest mountain is Roopkund Lake: a glacial body of water that hosts a terrible secret. For years, the lake sat unnoticed high in the Himalayas — more than 16,000 feet above sea level. Just to reach the peak once took a taxing five-day trek past the nearest civilization, explorers faced with the threat of rockslides. On top of that, towering altitude keeps the lake frozen most of the year. But during those rare periods when the ice melts and the snow clears, the glassy water reveals, finally, what lurks in the depths: hundreds upon hundreds of human bones.

In 1942, a British forest ranger hiked up the slopes of the Indian Himalayas and noticed the human remains sunken at Roopkund Lake. The climate was so cold that the skeletons were well-preserved… some still bore flesh on the bone. His discovery became an international fascination that was instantly politicized. Being at the height of World War II, many British officials assumed the skeletal remains of Japanese soldiers attempting to secretly invade India.

Between 600-800 people were eventually found in the glacial lake. Early research suggested that these were, for the most part, middle-aged adults of decent health. This led experts to believe the skeletons came from a single distinct group, the members of which all died at once. The sheer amount of human remains hints at a fascinating history — but exact answers remain out of reach.

One possible explanation for the skeletons is purported by locals of the Uttarakhand state through a popular folk song. The lyrics tell the story of mountain goddess Nanda Devi who started a hail storm with hailstones “as hard as iron,” striking and killing who passed the mysterious lake. Another local theory, more rooted in reality, suggests that roughly 900 years ago, an Indian king and his court all perished in a deadly blizzard on the Himalayan mountain.

Other hypotheses suggest that at least some of the human skeletons belonged to a group of Indians who tried, and failed, to invade Tibet in 1841. Or perhaps the lake acted as something of a cemetery during a time of increased fatalities, like an epidemic.

However, a new study that’s underway may shut down these varying theories for good. Geneticists are now using radiocarbon dating to date the remains of 38 bodies — and some trace back 1,200 years. Of the ancient DNA that has been analyzed so far, clear diversity signifies that multiple groups of people ended up in the lake of skeletons, their different deaths separated by up to 1,000 years. Eadaoin Harney of Harvard University told the BBC that the findings “upend any explanations that involved a single catastrophic event.” Though it’s still possible that a mass death could account for at least a number of the corpses.

Some of the bodies appear genetically similar to present-day people of Southeast Asian ancestry. Others are clearly European, specifically related to the Greek island of Crete. A pilgrimage might explain why these migrants were passing the treacherous mountain area during the 9th and 10th Centuries. But if people from the eastern Mediterranean had truly taken a Hindu pilgrimage up through India’s tallest mountains, then more complicated cultural quandaries arise… ones that genomic sequences cannot account for.

WATCH: 7-Year-Old Boy Had 526 Teeth Removed From His Mouth