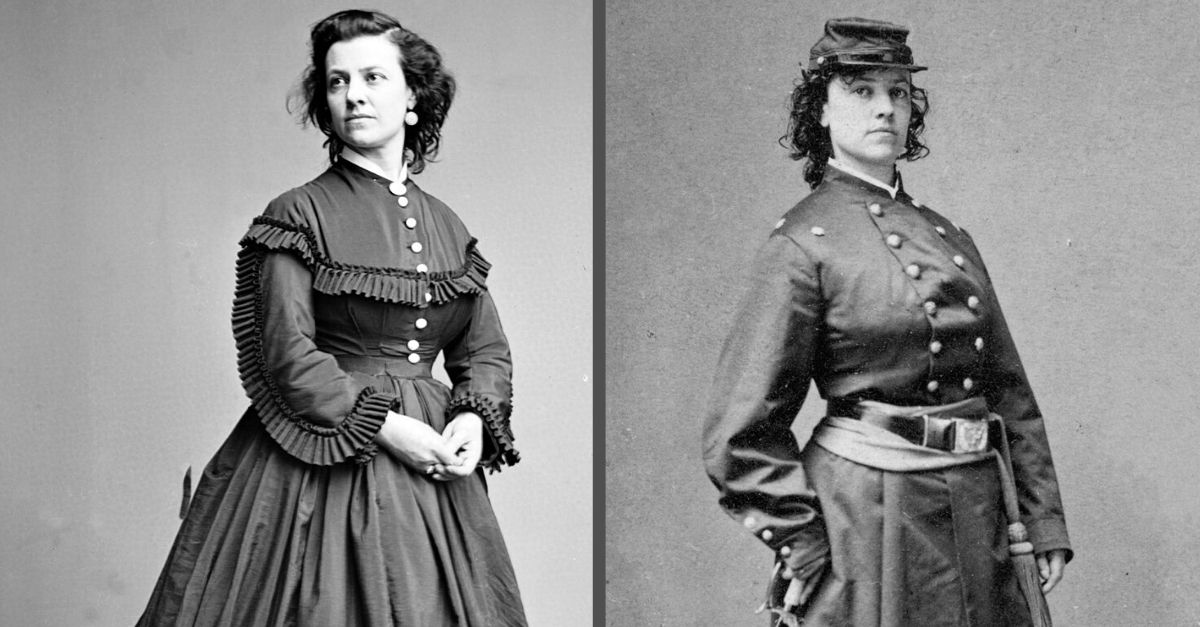 It’s no secret that Pauline Cushman was a talented and lovable actress. Unlike other performers, Pauline Cushman also spent time serving her country. What sets Pauline Cushman apart from other celebs that served? Well, she put her life in danger to be a spy during the American Civil War.

🇺🇸➡️ This is Major Pauline Cushman. – Pauline Cushman was an actress who went undercover in Confederate army camps performing, while at the same time gathering information for the Union army. After she was caught and sentenced to be hanged by the Confederates for spying she was rescued from prison, and was awarded a major's commission in the United States Army by President Lincoln. She was buried with full military honors in 1893! I have a coloring book with her as one of the pages 🙂 – – – #paulinecushman #womeninmilitary #historygirls #historyblogger #civilwar #civilwarwomen #historyblog #uscivilwar #confederate #union #unionarmy #confederatearmy #ushistory #1865 #civilwarhistory #militaryhistory #womeninservice #servicewomen #womeninhistory #abrahamlincoln #usgrant #williamtecumsehsherman #gonewiththewind #basednatasha #matthewbrady

Harriet Wood was born in 1833. She adopted the stage name Pauline Cushman at the age of 18 when she moved from Michigan to New York City to pursue an acting career. There she met her husband, Charles Dickinson. Their union did not last long, as he joined the Union army as a musician but tragically died in 1862. After this, Cushman decided to leave her two children behind with her in-laws and relocated to Louisville and returned to the stage as an actor.

Pauline’s big moment came when she made a performance in Louisville, Kentucky. Union army officers suggested she become a Union spy. She was prompted after one of her performances of The Seven Sisters, to propose a toast. While this seems innocuous, she was hesitant because the request was made by two rebel officers: Captain J.H. Blincoe and Colonel Spear. They wanted the toast to be made in honor of Confederate President Jefferson Davis. Hesitant, she asked her union contacts for direction. They told her to make the toast in order to win the favor of the Southern sympathizers.

Cushman carried out the deed at the performance. She proclaimed loudly, “Here?s to Jefferson Davis and the Southern Confederacy. May the South always maintain her honor and her rights!? It wasn’t long before she was asked to leave the stage and was fired from the show.

The toast let rebels know they could trust her and ultimately they did. She began mingling with the enemy regularly to gather intel. Rumor says that she sometimes wore men’s clothes to go unnoticed in gatherings. As a union spy, Cushman was able to gather battle plans and other valuable intel from Bragg’s army.

Being so close to the enemy did not go without its dangers. She was captured twice by General John Hunt Morgan and was sentenced to hanging. However, she managed to escape with more acting. Her sentence was postponed because she acted like her illnesses were worse than they were. Luckily, before her sentence date, the Union troops invaded Shelbyville, Tennessee. The Confederacy didn’t want to bring her in her condition, so they left her behind. them.

The Spy of the Cumberland

Pauline C Fryer, Union Spy . . . the resting place of Pauline Cushman, a southern actress and yes spy for the United States’ army during the Civil War. She concealed battle plans in her shoes, was caught by the confederates and sentenced to die by hanging but acted ill and her execution was postponed. She was made an honorary major by Abraham Lincoln and spent the rest of her life telling of her exploits until, after years of hardship (the loss of her young children, divorce and widowhood) she died at the age of sixty, a probable suicide, in San Francisco. She was buried here at the National Cemetery with full military honors. On this Presidents Day, this one’s for you. Thank you Pauline for your service to our country 🇺🇸⁣ .⁣⁣⁣⁣ .⁣⁣⁣⁣ .⁣⁣ #project_necropolis #graveyard_dead #aj_graveyards #aj_cemeteries #tv_churchandgraves #infinity_gothic_grave #graveyard_life #graveyard_freaks #grave_affair #silentcities #silentcitiessanfrancisco #cemetery_shots #cemeterylovers #cemetery_nation #cemeterylife #taphophile #taphophiles_only #etoe_2 #graveyard_fanatics #sanfrancisco #presidio #sanfrancisconationalcemetery #militarycemetery #paulinecushman #paulinefryer #unionspy #civilwar #presidentsday

Known as Spy of the Cumberland, Cushman’s post-spy life consisted of traveling with P.T. Barnum in 1865. He gave her the name “Miss Major Cushman.” She also toured giving lectures on her adventures as a spy. She was viewed as a hero and documented as such. Despite her several brushes with death, she was awarded the honorary rank of Brevet-Major by President Abraham Lincoln. Ferdinand Sarmiento later went on to write a biography about her life, titled, “Life of Pauline Cushman: The Celebrated Union Spy and Scout.” She attempted to have a civilian life and married multiple times, but unfortunately both her children and lovers died prematurely.

By 1982, Cushman had moved to El Paso, Texas, and was living in poverty. Her last years were spent in San Francisco, suffering from a drug addiction meant to ease her arthritis and rheumatism. She was found on the morning of December 3, 1893, having died of a morphine overdose. She is buried with her late husband’s last name as Pauline C. Frye.