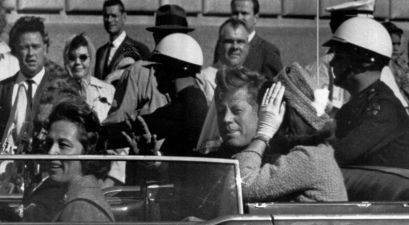 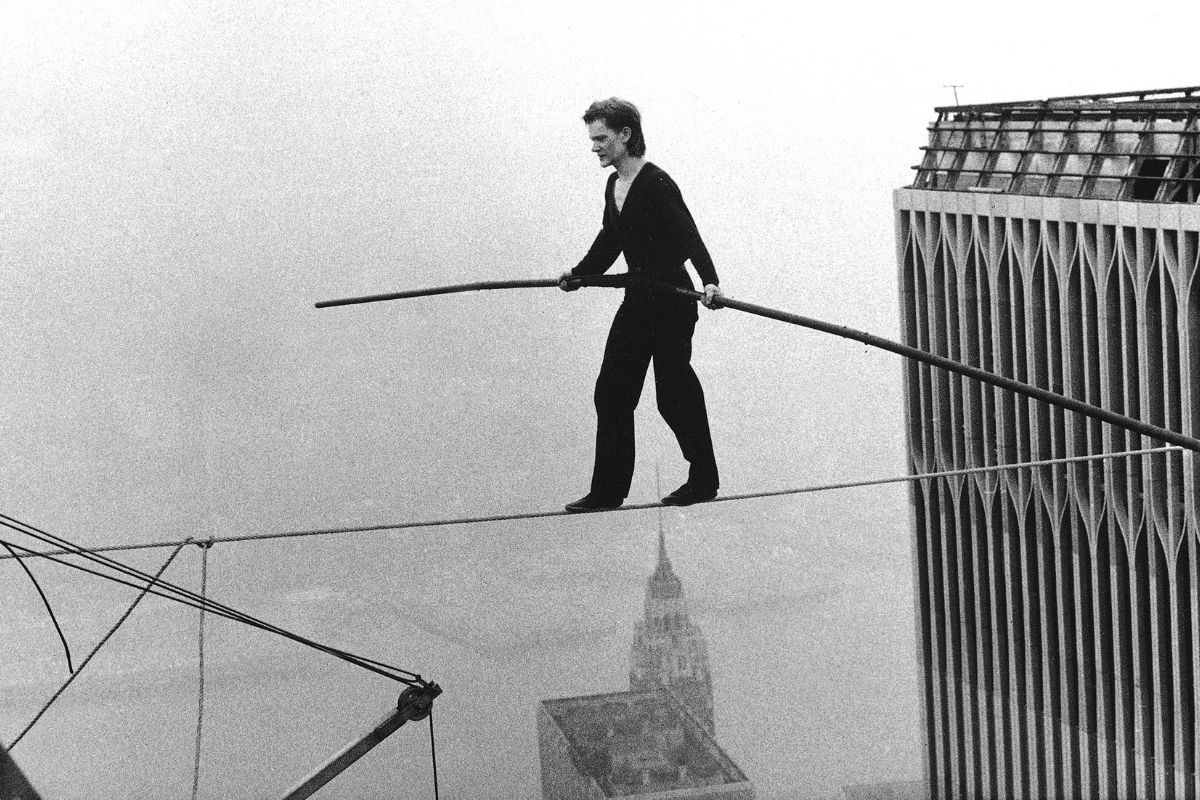 On August 7, 1974, tightrope walker Philippe Petit fearlessly traipsed between the Twin Towers in a miraculous high wire act. This 45-minute stunt wowed New Yorkers on the street below — nearly 2,000 feet below Petit’s daring, dangerous aerial display. Petit not only survived his walk atop the World Trade Center, but the theatrical Frenchman became an instant celebrity. “My story is a fairy tale,” he said in the 2008 documentary, Man on Wire. And what a fascinating fairy tale it is.

The French high-wire artist Philippe Petit was born “to reach the clouds,” as the title of his 2002 memoir suggests. The amateur magician always connected to physical performance, first working as a street juggler who unicycled through the streets of Paris. But it was tightrope walking that really called to the eccentric teen. During high school, Petit mastered the wire. Having trained his flexible body, it wasn’t long before he could strut with the zeal of a circus trouper while maintaining the concentration of a Zen monk. Craving an audience, the young acrobat became desperate to showcase his art to the world.

In 1971, Petit and friends covertly connected a cable between the two towers at the Notre Dame Cathedral in Paris. On June 26, 1971, he performed there and impressed the Parisian crowd playfully racing back and forth, even juggling between the church towers. His next high-profile wire walk was at the Sydney Harbour Bridge two years later. But the stunts in France and Australia were merely a warm-up for Pettit’s ultimate goal: wire walking between the newly constructed Twin Towers of the World Trade Center in New York City.

The 2008 Academy Award-winning documentary Man on Wire tells the glorious story of Philippe Petit’s historic feat through the fitting lens of a heist drama. Entertaining and beautifully edited, Man on Wire juxtaposes the “artistic crime of the century” with the guileless dream that Petit and his friends had for their mission. Of course, real life gets in the way and the fractured relationships left in the wake of Petit’s immense fame speak for themselves. The found footage and contemporary interviews in Man on Wire rearrange themselves, astoundingly, into the world’s most unusual coming-of-age tale. The film is available to rent on Amazon Prime. To anyone who remembers Petit’s 1974 high-wire walk — or even if you just enjoy a good heist movie — I cannot recommend it enough.

Philippe Petit and his daredevil crew snuck into the World Trade Center the night before the walk would take place. Split up between the WTC north tower and south tower, Petit’s friend Jean-Louis Blondeau used a bow and arrow to sail a fishing line to Petit 200 feet across the way. The fishing line was then used to connect a steel cable between the towers. Despite many near-failures in this messy mission, Petit stepped out from the south tower at 7 a.m. on August 7, 1974, and onto the wire where he would confidently remain for almost an hour. Most noticeable from the ground was Petit’s trusty balancing pole, which stretched out past his arms and helped the wire walker maintain core steadiness amongst the wind and swaying skyscrapers.

The Logistics of Philippe Petit’s Walk

By the time Philippe Petit came down off the cable, NYPD officers were ready. But the judge was lenient in this rare offense of the trapeze trespassing. Petit was let off the hook so long as he performed publicly in Central Park, and the Frenchman remained in the United States. (Some of his friends were not as lucky; watch Man on Wire to learn more about the tumultuous aftermath of Petit’s stunt.) Today, Petit lives in Manhattan as the artist-in-residence at the Cathedral of St. John the Divine.