Famous Pirate Flags During the Golden Age of Piracy 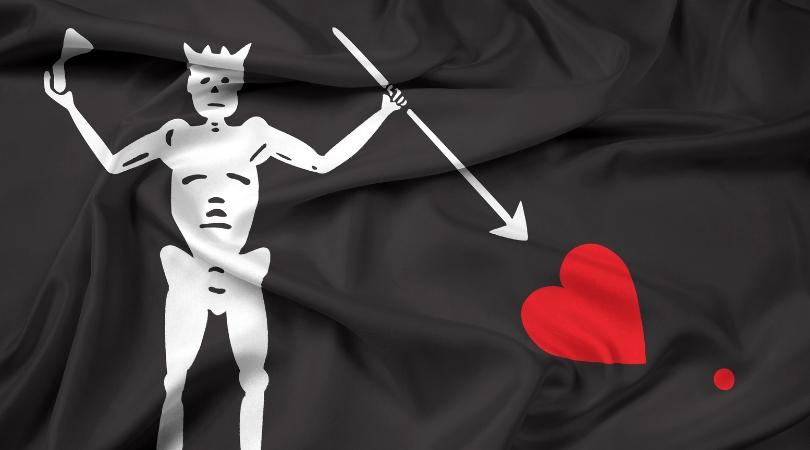 The act of “Pirating” dates back to before the 17th century. The Golden Age of Piracy was between 1650 to 1730, where many pirates flew their famous pirate flags while infamous names of Blackbeard, Black Sam Bellamy, and “Black Bart” Roberts struck fear into the hearts of many sea travelers and merchant ships. Earlier renditions of the pirate flag were monochrome, usually a plain black flag or a red one, a practice made popular by English privateers, high sea raiders. Until some time in the 17th century, the flags started to carry imagery and color to signal to other ships their intentions.

Some of the most well-known images on pirate flags are the skull and crossbones. This was the flag that came to known simply as the Jolly Roger. Its design defines a pirate flag in popular culture and cartoon depiction. From there many new symbols were created in a way to let other seafarers know what awaits them when they came across the ship it hailed from. Theories say Jolly Roger is a loose version of “Jolie Rouge,” also known as “pretty red.” Others say it is a play on “Old Roger, which is another name for the devil.” So, safe to say that each flag has meanings depending on their journey.

As pirates continued to fly their lags, some began to embellish their flags with symbols that represented death, violence, and the devil. The most common colors used white, red (which represents blood) and yellow. So, in case you go around looking for pirate flags, here are some meanings you should probably know of.

Of course, the famous skull and crossbones design was heavily used by pirates such as “Black Sam” Bellamy and Edward England. But, the designs have become heavily associated with specific pirate captains. Unfortunately, there is no “surviving” pirate flag from the 17th and 18th centuries, so these designs were purely based on eyewitnesses. Still, they are all pretty neat. Here are some famous pirate flags that have been seen throughout the years.

French pirate Emmanuel Wynn is credited as the first pirate to use the Jolly Roger on his flag. 18th-century eyewitnesses described this first pirate flag frequenting the Caribbean had a skull, crossbones, and an hourglass. Although the later image was described as a symbol of time running out some said it represented that the only chance of survival was to immediately surrender.

The most famous pirate, for sure was Blackbeard. His given name was Edward Teach and like his given name and his pirate name, his reputation and day-to-day pirating were black and white. He is known as a bloodthirsty pirate- even his flag had a horned skeleton with a spear pointing to a bleeding heart and toasting in the other. While Blackbeard’s flag was scary, he was a fairly tame and peaceful pirate. Sources say he didn’t even kill anyone until his very last battle.

Calico Jack was an English pirate active in the 1700s. His flag was a slight variation from the traditional skull and crossbones with the skull-bones being swapped out for a pair of cutlass swords under the skull. While Rackham was actually a low-profile pirate mostly pirating fishermen, he earned his infamy from a single fact. They were called Anne Bonny and Mary Read. The two female pirates aboard his ship were an anomaly seeing as very few women were pirates. Other than this, Calico Jack was an uneventful pirate.

John Phillips pirate flag also featured a naked pirate toasting and a bleeding heart. Except on his 18th-century version had a bleeding heart on the spear. Before he was pirate he was a ship carpenter. The shop he was on was captured by pirates. He managed to escape back to society. However, he struck out on his own pirating adventuring in 1723 after getting bored of civilian life. His first act of piracy? He stole a ship and named it Revenge. On his ship, pirates were sworn in on a hatchet instead of the typical bible. Phillips didn’t pirate for long. He died the following year when one of his prisoners killed him in a surprise attack on April 1724. Phillips is a noted pirate because of his nine articles of a pirate code.

Edward “Ned” Low was a successful pirate; the type of pirate that gave pirates their reputation. His pirate flag had only a blood-red skeleton on a black flag. Low grew up stealing, gambling and fighting, so it’s no surprise that his pirating ways were brutal. He shot a musket at the captain of the first ship he worked on as a log cutter. As a pirate, he robbed hundreds of ships ruthlessly and everyone who saw his flag was fearful. No one knows exactly what was the demise of such a rough and brutal pirate, but he died in 1725.