The idea for aviator sunglasses dates to 1920. That year, a man named Shorty Shroeder flew an airplane to a then-record altitude of 33,000 feet.

His goggles fogged up, forcing him to remove them, leaving his eyes exposed to sub-zero temperatures. Shroeder managed to land the plane, and he was helped out of it by Lt. James A. Macready, who never forgot Shroeder’s swollen, frozen eyes.

In 1929, Macready went to work for Bausch & Lomb to design better eyewear for airplane pilots, and the original Aviators were born.

Aviators were first sold in 1937 with plastic frames, but they wouldn’t have the classic “Aviator” name until the following year. Bausch & Lomb’s Ray-Ban Aviators – with metal frames – hit the market in 1938.

Aviator sunglasses were marketed for outdoorsmen. They were sporting equipment for men who needed specialized functionality, not something every guy needed in the late 1930s.

But when World War II broke out, the public saw countless image of aviators from the Pacific and European wars. General Douglas MacArthur is probably the most famous example, with the pictures of him returning to the Philippines. Plus countless other pilots were photographed for print media wearing aviator glasses.

Then Hollywood got involved.

Movies started featuring leading men in aviators. Marlon Brando was the first, n the 1950s. Ray-Ban then launched a major advertising campaign in the 1950s, and the rest is history. 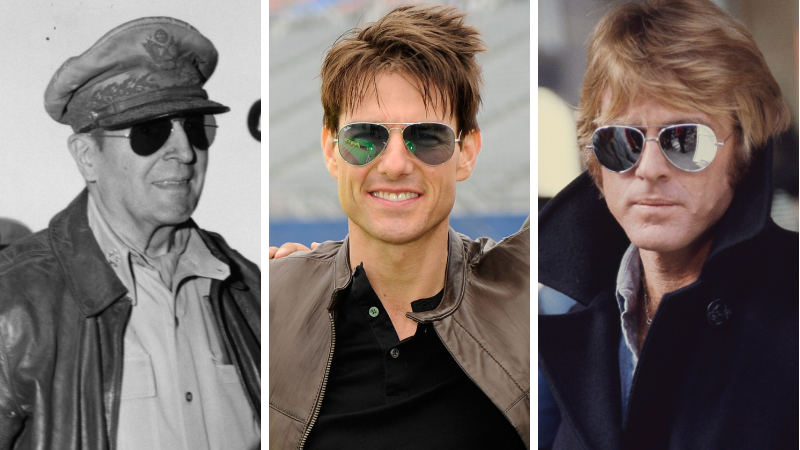