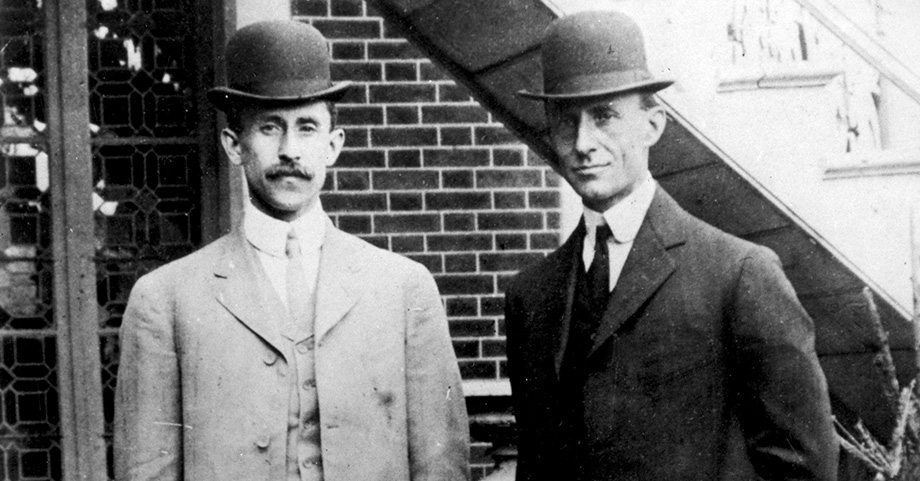 Without any formal experience or education in aeronautics, The Wright Brothers built the first airplane in world history. How were they so successful? Here is their story.

Wilbur and Orville Wright were born four years apart and were the youngest children in the Wright family. The children of Bishop Milton Wright and Susan Catherine, a mechanically adept woman who made toys for her children.

Today on March 23, 1903, the Wright Brothers unsuccessfully filed their first patent for the 'flying machine.’ ••••• Orville and Wilbur Wright are perhaps the two most famous brothers in American history. The Wright Brothers are generally credited with inventing the first airplane—while some simply credit them with being the first to patent it successfully. In 1902, the two aviation pioneers conducted several experiments and eventually succeeded in controlling a glider across all three axes of the flight—pitch, roll, and yaw. Most importantly, they discovered how to simultaneously use roll and yaw controls to achieve a forward-elevated movement. On March 23, 1903, they finally wrote and filed their first patent but without any expert legal support. The United States Patent Office swiftly denied their initial attempt. ••••• Click on the link in today’s story to continue reading the full post. •••••

In their youth, the boys were encouraged to study and explore whatever caught their interest. From books to sports, the Wright brothers had various niches of interests. The love of flight was the one that brought them together in a way that would change history.

For the Love of Flight

When the boys were 11 and 7, respectively, their father, Milton, brought them a 50 cent helicopter comprised of paper, bamboo, cork, and rubber bands for the blades. The toy ignited a curiosity to build their own flying machine. This hobby lasted over the next few years but died when they failed to make one that was aerodynamic enough to fly. In 1889, a year after Wilbur would have graduated college, had he not deferred due to a heart condition, the boys began working together again. First, they built a printing press and distributed a weekly paper. Later on, it was a daily printed paper. Three years later, in Dayton, Ohio, the brothers opened a bicycle shop, Wright Cycle Company, and started to producing bikes. The same year that Orville pioneered a self-oiling wheel hub, 1896, the boys learned of the death of a prominent German aviator, Otto Lilienthal. His work showed the world that flight was possible for man. That is when the Wright Brothers began experimenting.

The Chief of the U.S. Weather Bureau, upon request, sent the brothers a list of high wind locations in the U.S. The first place on the list, Kitty Hawk, North Carolina, is where Orville and Wilbur Wright started testing wing design with a wind tunnel,  kites, and gliders. From 1900-1903 they worked steadily. In 1902 they patented their “Flying machine,” and in 1903, they conducted the first airplane flight in a “powered, controlled, heavier-than-air airplane.”

#aviation #avgeek On October 24, 1911, a photographer for @nytimes captured Orville Wright in the midst of a record flight in Kill Devil Hills, North Carolina. “Glider in the Air Nearly 10 Minutes,” read the headline in @nytimes the next day. The test flight came just 1 day after Orville “had a narrow escape from serious injury” when his glider turned over in the air “and he was dashed to the ground,” @nytimes reported. The machine was damaged that day, but not so badly that it couldn’t be used in other testing that week. “To make travel in the air virtually as safe as it is on the earth is known to be the real purpose of the experiences,” @nytimes reported. The record flight itself took place over the course of 9 minutes and 40 seconds, in winds blowing at 50 miles per hour. “The success of the experiment is understood here to mark a long step forward in the science of aviation and to point the way toward solving the problem of automatically preserving the equilibrium of heavier-than-air machines,” @nytimes reported. But the test convinced Orville that “the development of aviation depended almost completely on a greater knowledge of air currents and greater skill in meeting such conditions.” — @kermac, @nytimes social photo editor #✈️ #OrvilleWright #WrightBrothers #KittyHawk

Initially, the Wright brothers were not accepted or taken seriously by flight experts or the public at large in the United States. To find a more supportive market, Wilbur flew to France.  The following year Orville and their younger sister Katharine moved to Europe, as well. France took the Wright Brothers and their invention seriously and treated the brothers richly. They held audiences with government heads and royalty. More importantly, they sold their planes. They were well-respected and wealthy.

In 1909, the U.S. government signed a contract with the Wright Brothers to use their plane model as the first military aircraft.

Although, Orville had demonstrated flight over Fort Meyer, Virginia, for the army a year prior, in 1908.

In 1912 Wilbur Wright died of typhoid fever. He was 45 years old. His brother lived to be 77 and worked to maintain their legacy.