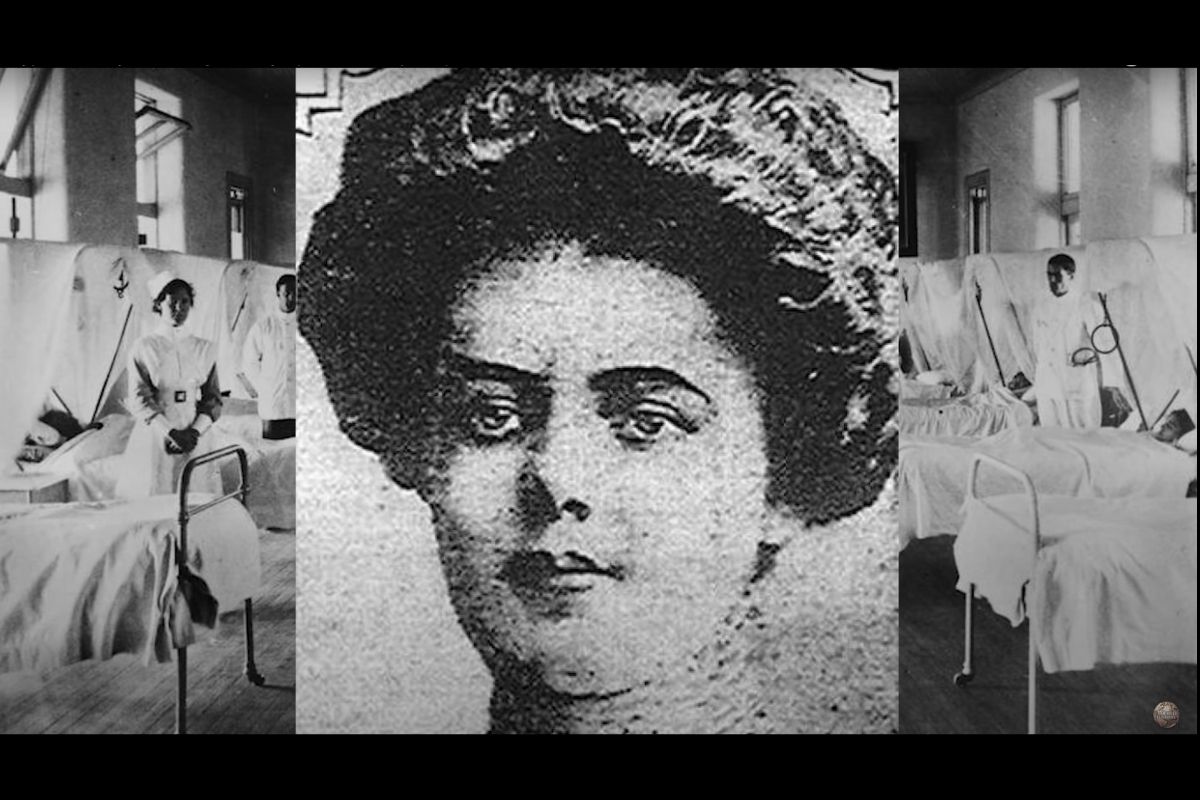 By now, we are all too familiar with the term “asymptomatic carrier.” As the Coronavirus pandemic continues — and the vaccine finally rolls out — many questions remain about the possible spread of the virus by those who seem immune. So there’s no better time to learn about Mary Mallon, a.k.a. Typhoid Mary, the Irish immigrant who unwittingly spread Typhoid to between 53 and 122 people (reports differ). Her punishment? Mallon spent 26 years in quarantine!

Typhoid fever is a bacillus disease caused by Salmonella typhi that’s spread through direct contact with an infected person, or through contaminated food and water. Symptoms range from mild to severe and include a high fever, weakness, abdominal pain, diarrhea, etc. Many people develop a skin rash with rose-colored spots. Although the symptoms themselves don’t sound life-threatening, typhoid fever proved fatal in 10 – 30% before treatments were available. In 1911, a vaccine was developed and in 1948, antibiotics became the leading cure.

But before those scientific advancements, a deadly typhoid fever epidemic broke out in New York City between 1906 and 1907. According to the CDC, a total of 25,830 New Yorkers died during those two years. (To put that in a modern perspective, 46,790 New York state residents have died of the Coronavirus in the past year.) Of those many thousands of cases of typhoid, roughly 122 of them got arose from coming into contact with an off-the-boat Irish chef named Mary Mallon.

The Story of Typhoid Mary

Mary Mallon was born in 1869 in Northern Ireland, in Cookstown, County Tyrone. Since Mallon’s mother had typhoid during her pregnancy, it is presumed she was born with the disease — though she never showed symptoms. When Mallon was 15, she emigrated to the United States where she became a cook for wealthy families. Mallon was beloved among her clients, especially for her signature dessert: delicious homemade ice cream topped with sliced peaches.

From 1900 to 1907, Mary Mallon worked as a cook in the Manhattan area for eight different households. Seven of them ultimately contracted typhoid. In August of 1906, Mallon took a job cooking in the vacation destination of Oyster Ba on Long Island for an extremely well-off family. The father, Charles Henry Warren, was the banker for the Vanderbilts. By early September, six members of the household came down with typhoid fever. This was especially concerning in the affluent, sanitary Oyster Bay where diseases like Typhoid were rare.

Around the same time, Mary Mallon left to work for another rich family, the Bowens, on Park Avenue — who got sick. Meanwhile, the Warren family, which was still suffering from Typhoid, lost their young daughter to the illness. Having had enough Charles Warren hired an independent investigator and sanitary engineer named George Soper to determine the cause of typhoid outbreaks among such rich communities. It didn’t take long for Soper to see the common link: Mary Mallon.

George Soper confronted the cook in the Bowens’ kitchen and accused her of being the guilty disease carrier. According to legend, enraged, Mary Mallon came at him with a carving fork. Mallon refused to give any biological samples, but she didn’t need to; Soper had compiled a history of her employment which was damning enough. At that time, the concept of a healthy carrier of anything, let alone typhoid, was relatively unheard of. Soper’s findings were shocking.

Mary Mallon was soon arrested as a public health threat and detained by the Department of Health. Mallon was forced into an ambulance by five policemen and, interestingly, Dr. Josephine Baker, the historic and pioneering female physician who’d lost her family to Typhoid. Reportedly, Baker had to sit on Mallon to restrain her inside the car! Eventually, Mallon was forced to give bodily samples and, sure enough, high concentrations of typhoid bacteria were found in her stool samples indicating the infection was in her gallbladder. Mallon soon admitted that she almost never washed her hands after going to the bathroom. The feces germs on her hands likely spread through the sliced peaches on Mary’s famous ice cream.

In March of 1907, Mary Mallon was forced to quarantine on North Brother Island where she remained for three years. During that time, George Soper published an article in The Journal of the American Medical Association, nicknaming the super-spreader chef “Typhoid Mary.” The name stuck. Mary hated it, of course, as her reputation was ruined. But she also refused to believe that she was truly a carrier of typhoid. When Mallon was released from quarantine in 1910, she started cooking again under fake surnames (like Mary Brown) — directly defying the orders of health officials. Since she could obviously no longer find work in the lucrative field of wealthy kitchens, Mallon turned to the public sector: restaurants, hotels, and eventually, New York CIty’s Sloane Hospital for Women. But still, Typhoid Mary did not wash her hands!

“I am an innocent human being. I have committed no crime and am treated like an outcast – a criminal. It is unjust, outrageous, uncivilized. It seems incredible that in a Christian community a defenseless woman can be treated in this manner. ? Why should I be banished like a leper??”

— Mary Mallon (from Typhoid Mary: Captive to the Public?s Health)

25 people at the Sloane Hospital for Women became infected and two died. The head obstetrician called George Soper for help, and even though Mallon had fled, he immediately recognized the culprit through several verbal descriptions of the chef. Mallon was eventually found and sent back to North Brother Island’s Riverside Hospital for quarantine in March of 1915. She remained there for the rest of her life — more than 23 years — and lived in her own one-story cottage. She eventually found work as a lab technician and was allowed day trips back to the mainland, across the East River.

Mary Mallon died on November 11, 1938, of pneumonia. She was 69. Reports differ on whether Mary Mallon’s gallbladder was removed for examination upon her death. She was then cremated, her ashes buried at Saint Raymond’s Cemetery in the Bronx. Nine people attended the funeral. In all, Typhoid Mary is believed to have directly spread typhoid to five people who died of the infectious disease.