Homeowner Handcuffed in Own Home After False Burglar Alarm 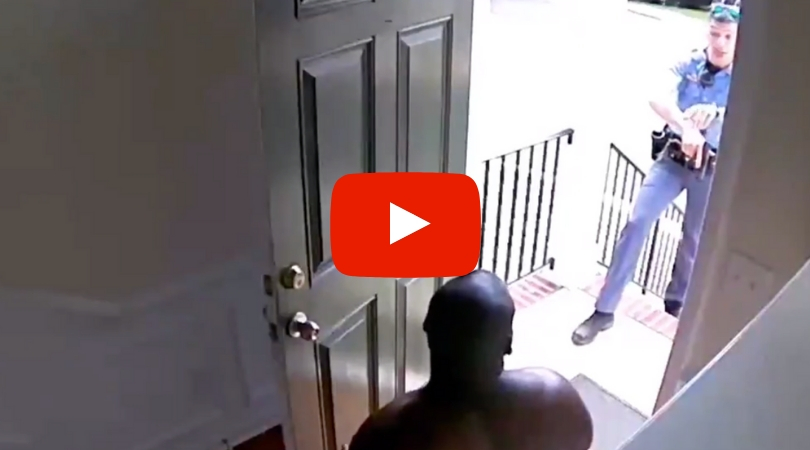 An African-American homeowner says he has endured the “most humiliating experiences of his life, after white police officers answered a false burglar alarm at his home in North Carolina, and placed him in handcuffs. The cops held the man at gunpoint and walked him to a police car in just his boxer shorts as neighbors watched outside for their doors.

According to 31-year-old Kazeem Oyeneyin, he was counting the seconds since he thought the police were going to kill him. Raleigh police officers are currently investigating the case and are looking into the incident. But, between you and me, we know exactly what happened and why these men put handcuffs on this innocent man.

Oyeneyin said police were called to his home after a friend who was staying with him left and triggered his home security system. The homeowner was asleep and did not hear the alarm as soon as it went off, but his cellphone, which is linked to his security system, sounded and woke him up.

“The most humiliating experience of my life.”
• • •
Wearing only his boxer shorts, this North Raleigh man was handcuffed and detained after his home alarm was tripped accidentally.
The ugly incident caught on tape — We’re talking to the homeowner and Raleigh Police. #abc11 pic.twitter.com/J3wEUgU9lR

Twenty minutes later, after turning the alarm off, he heard loud noises and quickly grabbed his gun since he was afraid of someone being in the house. Security footage in his home shows an officer holding a gun in his hand and push open the front door yelling, “Police. If you’re inside, make yourself known. Come out with your hands up.”

Oyeneyin then responds that he has a gun (to which he has a carry permit for) which prompts to the officers to shout at him to drop the weapon and step outside the front door. The homeowner quickly pauses in his foyer and takes out his cell phone to record and begins to explain that he is the owner of the home. Officers ignore the man and continue to point a gun at him, asking him to turn around and get on his knees. The man complies as officers handcuff him by force as a Sergeant orders officers to take him to the back of a police car.

Understand the need to check for a possible intruder, but could this interaction been handled differently. This man could have been kill.

While sitting in the back of the police car, a second sergeant arrived at the scene and recognized Oyeneyinand told officers to remove the handcuffs, walking him back up to his house as if nothing had happened. Days after the incident, the North Carolina man said that internal affair cops showed up at his residence with more questions, but he refused an invitation to file a formal complaint at the police station.

Now, I’m no criminal expert whatsoever, but this to me seemed like it was an issue of profiling. Once more, these cops are probably going to get away with “accidentally” suspecting the wrong guy. This police department needs training on stereotyping asap. You couldn’t have asked for an ID?